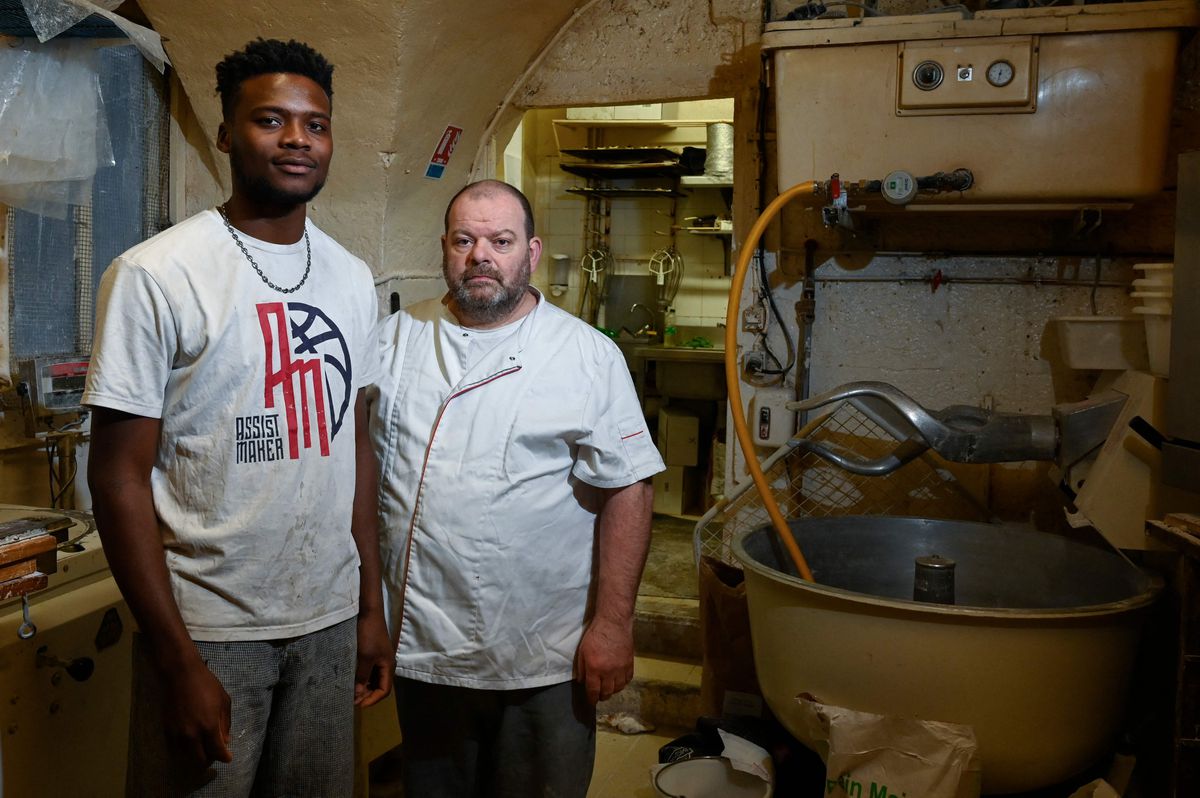 It’s still night in Besançon, candidate Stéphane Ravacley has slept a little over three hours after giving a rally in front of hundreds of people and faces a tough day, the last before the second round of French general elections on Sunday. First a radio debate with his rival. He then distributed leaflets in his constituency in this city of 115,000 in western France near Switzerland.

But now it’s 4:45 a.m. and candidate Ravacley is going about his usual craft: kneading buns and buns Baguette and puts them in the oven of his bakery in the old town of Besançon. Though he’s focused on the task, he can’t stop his mind turning over and over what he’s done so far – the dazzling career from anonymity in Besançon to national stardom – and what awaits him when the sun sets coming soon.

“I can’t stop thinking about the radio debate,” he admits during a break. “I didn’t have much time to study.”

La Hûche à Pain, as the bakery is called, is the campaign’s official headquarters, the place where he says he designs the strategy in his head as he bakes the bread. And it’s where Ravacley has made a name for himself that could land him in the National Assembly on behalf of the New Popular Ecological and Social Union (NUPES), left-wing populist Jean-Luc Mélenchon’s alliance.

It was at this bakery that he went on a hunger strike in January 2021 to prevent the French government from deporting Laye Fodé Traoré, his Guinean apprentice. Traoré came to France as an undocumented underage immigrant after traveling through Africa and the Mediterranean. At the end of 2010, after turning 18, he was told that he had to leave the country.

The hunger strike made Ravacley a minor celebrity. After resisting for several days, the authorities legalized the apprentice. Now he works in another bakery, 90 kilometers from Besançon, in Dijon, has a girlfriend and is about to graduate from high school.

“It was 11 days of hunger strike before the French government called me and said they would take care of the child,” Ravacley complains. “That told me there was a problem.” And so the political virus bit him. He was finally persuaded to take this step after a Senate rejection of a law that would make it easier for minors to be regularized after they came of age.

“When I listened to all the lies being told in the Senate about education and immigration, I said to myself, I need to get into politics,” he recalls. get nowhere.”

Ravacley is now one of a handful of candidates in the legislature who are not political professionals and come from professions not typically associated with government or parliament. Another candidate, also from NUPES, is Rachel Keké, a hotel room cleaner. A year ago, after 22 months of strikes and protests, Keké, along with other employees at an Ibis on the outskirts of Paris, achieved improvements in working conditions and wages.

“The more people like Ms. Keké or like me in the National Assembly, the more the laws will resemble us because we will be the ones who voted for them,” Ravacley argues. “When you have a trade, you live real life.”

After the Second World War, one in five MPs in France was an employee or worker; now, according to the NGO Observatory of Inequalities, there are 4.6% white-collar workers and no blue-collar workers.

It is not uncommon for representatives of civil society to be represented in Parliament. But they are precarious workers like Kéké or small business owners like Ravacley, a baker who doesn’t want to give up his job if elected.

“I’ve known poverty and hunger, I’ve lived in poorly heated houses, I know the difficulties of running a business,” Ravacley lists, referring to the experience that would set him apart in the National Assembly. And what can he or Rachel Keké contribute? “A little humanity, kindness, beauty.”

In the previous parliamentary elections in 2017, the most visible candidates from civil society belonged to Emmanuel Macron’s party. He had just been elected president and presented a fresh and youthful image: a break with old politics. Now Macron represents the system and many of his candidates are figures of it furnishings. It is Mélenchon who, despite being the oldest of all active politicians, presents the most visible candidates in civil society with NUPES.

On June 12, in the first round of general elections, Ravacley won 32.5% of the vote in his Besançon constituency. The candidate of the ensemble – the Macronist coalition – received 31.4%. Both will fight for a seat this Sunday.

Ravacley is not affiliated with any party. But he has been a socialist sympathizer for years and is consistent within the NUPES coalition as an environmentalist. The son of a farmer and motherless since the age of four, he left school at the age of 15 and started as an apprentice in a bakery. “My father said to me, ‘If you put your mind to it, you will never go hungry.’ He was a pastry chef with the French army in Djibouti and has been running La Hûche à Pain for 25 years.

Thursday, 9 p.m.: The hall of the Micropolis pavilion in a neighborhood on the outskirts of Besançon has filled to see the NUPES candidates in the city. The star is Ravacley. “It’s part of the show business‘ he smiles as he is introduced by the rally’s master of ceremonies, a local communist leader. “No, no, no,” the baker replies, shaking his head.

At the microphone, Ravacley jokes about the heat in the room – “it’s cooler in my oven” – and recalls his hunger strike and his reasons for going into politics.

“We want to work to live, not live to work,” he proclaims, although he’s not referring to himself: his schedules are Stakhanovian. “I’m a work marathon runner,” he justifies himself. “I don’t get tired”.

“Ravacley is a good candidate,” said a candidate named Martine Ludi, who was beaten in the first round in another district last Sunday, before the rally began. “But it bothers me,” he told the journalist, “that you only came here because he went on a hunger strike. It’s a shame just talking about him.”

His Guinean apprentice’s hunger strike was not Ravacley’s only act of solidarity. In March, after the Russian attack on Ukraine, he stockpiled food and clothing and organized a caravan of 23 trucks from Besançon to the Ukrainian-Polish border. When asked if it doesn’t bother him that his leader Mélenchon was so accommodating towards Russian President Vladimir Putin up to the time of the invasion, he replies: “He’s a member of my family and I don’t always agree with him. the”.