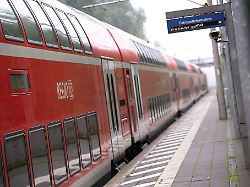 For bus and train drivers, the use of local transport is temporarily significantly cheaper: for three months, a monthly ticket should only cost nine euros. However, some details remain to be clarified.

Regional President Steffen Krach said he warmly welcomed the €9 note. “For me, however, the question arises what comes next. If we really want to create a mobility shift, we need cheap public transport in the long term. And there must be money available for this in the long term,” the SPD politician said. Krach also referred to the Hannover region’s plans to introduce a 365-euro annual ticket.

VBN managing director Rainer Counen said he sees the ticket as a relief measure and as an incentive to use the bus and train. However, information on the implementation was still missing. He described an increase in passenger numbers as a result of the ticket as desirable, but there are also offsetting effects, in particular due to Corona: “High incidences still hamper the use of buses and trains, mobile work has eliminated the need to travel” ; on the other hand, high gasoline and diesel prices could lead to increased use of local transport. “So right now it’s hard to assess how user behavior is developing.”

The federal government had unexpectedly announced the 9-euro monthly note limited to three months as a relief measure in the face of high energy prices. On the other hand, the conference of transport ministers on Friday proposed a zero tariff, because that would keep costs down for transport associations. This recommendation should be examined in a federal-state working group, said Bremen Mobility Senator Maike Schaefer (Greens).