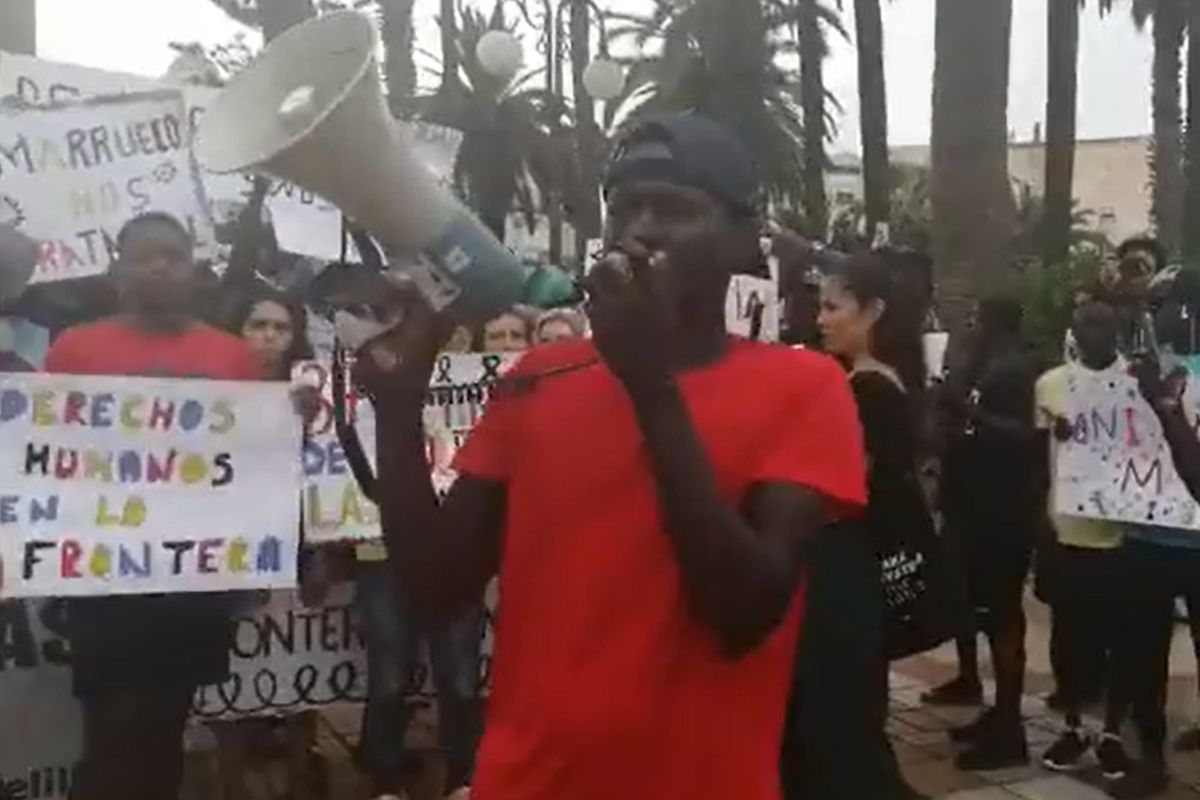 Fifty Spanish cities are holding demonstrations this Friday against the deaths of migrants at the borders and in protest of the last recorded a week ago next to the Moroccan border of Melilla, in which at least 23 migrants lost their lives.

The 133 migrants who managed to enter the autonomous city gathered in the city center this Friday afternoon to commemorate their compatriots who died at the border. “We need help: they kill people every day,” claimed Mohamed Ali Omar, a 20-year-old Sudanese. Several groups in the city have called for the rally, which has brought together around 250 people, including residents of the Temporary Immigrant Stay Center (CETI), who marched last March.

Moroccan authorities have only confirmed the deaths of 23 people, allegedly crushed in the corridors of the Chinatown crossing, but several organizations put the number up to 37. “We don’t know anything, they’re lying to us,” said Cholo, 22 and from South Sudan , the country from which he left in 2013, Cholo revolted in Melilla in March, in the largest jump to the fence on record in the city: up to 2,500 people tried to enter Spain for two days and 954 succeeded. The young man is looking for his friend Omar, who he met in Morocco and who tried to enter the city on Friday: “I was told he was alive but I couldn’t reach him and I don’t know where he is.”

“We call for an independent investigation into the deaths that have occurred,” said one of the survivors in a statement signed by more than 1,000 organizations across Spain. They also call for an end to forced returns and the establishment of legal and safe routes for migrants. Since the events at the border and even to this day, Morocco has exercised tight control over what is happening. In Nador, journalists and human rights organizations were prevented from even approaching the Hassani Hospital, where the wounded were being treated and the bodies of the deceased were being transferred, and the Sidi Salem Cemetery, where graves have already been dug for burials to date.

“We are dismayed by what happened,” says Mar Soriano of Solidary Wheels, one of the units called up, “the border architecture itself is violent, but the recent crimes are appalling.” “We don’t understand why there isn’t an investigation into the… incident,” he protests. “It was necessary to remember what happened a week ago and do it with the survivors,” explains Marisa Amaro of Geum Dodou.

The 133, all asylum seekers and mostly from Sudan, have become almost symbols. You are the voice of those who didn’t make it and of those who have disappeared without a trace, but also the voice of a generation of Africans. “We call on the international community to change Africa’s future,” echoed the voice of Sudanese Hussein in the Plaza de España.

Mohamed left Sudan in 2017 at the age of 15 and ended up in Libya. “The situation in my village has been made very complicated by the war between the government and South Sudan,” he says. “My family is still there, but I don’t know where they are.” From Libya, he attempted to leave for Europe by sea, but was twice intercepted by the Coast Guard and ended up in prison. In 2021 he left for Morocco after crossing Tunisia and Algeria. Getting to Nador, the province that borders Melilla to the north, was an odyssey. “I tried three times, but the police sent me back to the Algerian border,” he says. It also cost him three attempts to enter Melilla after participating in the two jumps in March. Now, from Europe, he continues his thoughts on those left behind in Morocco.

The 133 migrants who managed to enter Melilla last Friday took over the city center a week later to commemorate their compatriots who died at the border. “We need help,” claimed Mohamed Ali Omar, a 20-year-old Sudanese, “they are killing people every day.” Several groups in the city have called for the rally, which has brought together around 250 people, including residents of the Temporary Immigrant Stay Center (CETI), who marched last March.

In Barcelona, ​​according to the Urban Guard, since 7.30 p.m. around 1,700 people have demonstrated in front of the government delegation in Catalonia on Calle Mallorca in Barcelona and have landed in Square Idrissa Diallo, which bears the name of a young man who died after leaving the foreigners detention center (CIE) had passed the free zone. The march was led by banners with the slogans “Black Lives Matter” and “Against the Melilla Massacre”. “These are not dead, these are murders by European colonialism,” read another banner that opened the protest.

A blanket of indignation covered Plaza de Callao in Madrid this Friday. Several humanitarian associations called protests in defense of migrants and vulnerable groups, gathering several hundred people in the center of the capital. Protesters have called for an investigation into the incident at the fence and that “it won’t happen again”. The cloak of outrage has been humanized as organizers have asked the “racialized” participants to lie down on the ground to mimic the images of the migrants huddled next to the fence.

The focus also served to urge the government to halt the calls hot returns and collect signatures to demand the regularization of all migrants in an irregular situation on Spanish soil. Several associations of the different black communities in Spain have taken the floor to express the “anger and pain” caused by the deaths of migrants trying to jump the fence, as the social movement Regulación Ya puts it. “The situation that black Africans have to face is very painful from birth to death. Everything bad occurs in this word in the dictionary that says Black‘ said the exuberant spokesman for the Spanish African Union.

Some of the participants knelt on the floor between banners with anti-racist messages and the beat of drums, the gesture popularized in the United States during the Black Lives Matter protests. “Melilla, brothers, we will not forget,” the demonstrators chanted with raised fists.

Members of the Manteros Union also attended the protest. One of their spokespersons read out a statement in which he implied that “what is happening is not normal”. “They pass the ball, we demand investigations, we’re tired of dying on the borders,” he added. In addition, organizers have requested information on the survivors of the tragedy to find out which hospitals they are in and what treatment they are receiving. “These aren’t dead, they’re murders,” was the slogan most often repeated that Friday afternoon in Callao.

In Andalusia, hundreds of people have gathered in cities like Malaga (150 participants) and Cordoba (200). In Navarre, several hundred people took part in a rally on the Paseo de Sarasate in Pamplona.

Dozens of activists also gathered this Friday for a sit-in outside the Moroccan parliament in Rabat to demand a dignified burial and the return of the bodies of the 23 emigrants to their families. The participants in this protest, which was called by various NGOs defending human rights and the rights of migrants, also called for the launch of an “independent investigation” into the tragedy “to determine who is responsible”. “Migrants are not criminals” and “No to Frontex” are some of the banners carried by the demonstrators who observed a minute’s silence for the dead. NGOs involved in the protest put the death toll in the Melilla tragedy at 29.