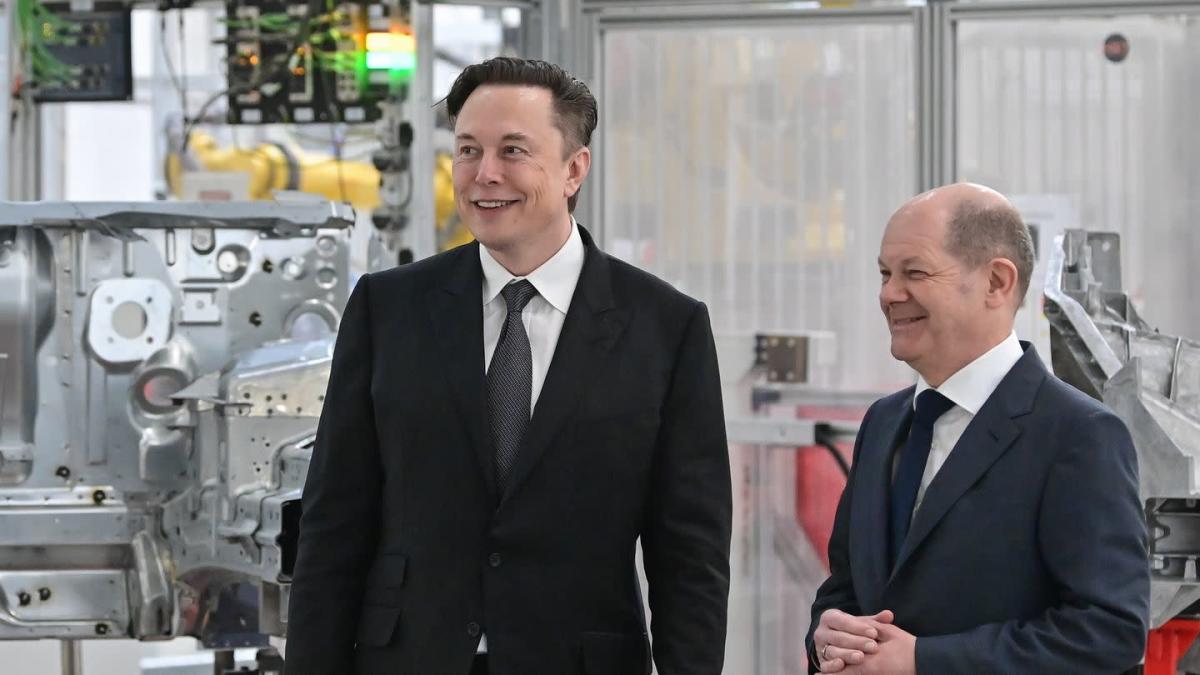 Grünheide (dpa) – The first Teslas “made in Germany” roll through Germany, personally delivered by CEO Elon Musk. After two good years of construction, he opened the group’s first European electric car factory on Tuesday at the gates of Berlin.

“Thanks for everything,” Musk said, almost sheepishly. Many celebrities have come to the plant in Grünheide in Brandenburg, including Chancellor Olaf Scholz (SPD), Federal Minister for the Economy Robert Habeck (Greens) and Brandenburg Prime Minister Dietmar Woidke (SPD). It is not a conventional opening: for Musk it is the sign that green energy can defeat climate change and for Scholz that East Germany can also make industry.

The federal government and the state of Brandenburg celebrate the project with investments of around five billion euros as a sign. In a first phase, 12,000 employees will produce 500,000 cars a year. “In terms of industry, the East is at the forefront,” the chancellor said, citing Intel’s planned €1bn investment in a chip factory in Magdeburg, along with Tesla. Tesla factory shows: “Germany can be fast.” Germany is still an industrial country, says Scholz. But he calls for a rethink. “Things we can already do today will not create wealth for us.” This is why Germany relies on electric cars. “Electromobility will shape the mobility of the future and that is clear here today.”

Musk wants to present the future with his new Gigafactory, in an area of ​​227,000 square meters, about 30 football fields. The factory is the most modern of Tesla’s five production sites in the US, China and now Germany. Musk handed over the first 30 cars from the new plant to owners: the first came from Munich, the second owner from Berlin-Köpenick. The cars at Giga Berlin have only been rolling off the assembly line for a few days. Tesla was only allowed to start when the necessary conditions of the approval about two weeks ago were met. According to the company, it takes ten hours to finish a Tesla made in Grünheide. The car advances one more step every 45 seconds. The idea is to build cars from a single source if possible. More than 400 robots work on the Model Y in the body shop. More production lines are currently being built.

Habeck speaks of a special day for the mobility turn. Tesla chose Germany because the company expects the leading market for electric mobility to be here. That is also his goal, said the minister. He is pleased that the abandonment of oil is gaining new momentum. The Federal Government Commissioner for the East, Carsten Schneider, cheered on Twitter: “Something is happening in the East!” Brandenburg Economics Minister Jörg Steinbach (SPD) said on rbb Inforadio: “We have outwitted the world.”

But there are also many critics. Environmentalists protested on Tuesday -Water Day- against the megaproject, mainly due to concerns about the lack of drinking water in the region. Five environmentalists rappelled down Autobahn 10 in both directions. According to the police, an investigation was opened against them on suspicion of dangerous intervention in road traffic. The A10 was temporarily closed. The organizations Sand im Getriebe, Ende Gelände and Extinction Rebellion blocked a factory gate with a sit-in, partly with superglue. 18 participants were arrested, 13 were expelled. The citizens’ initiative Grünheide explained that electric cars weighing tons are “anything but climate-friendly” in production, use and disposal. The company states that the water consumption per car is 2.2 cubic meters, the industry average is 3.7 cubic meters.

Musk announced the €1 billion investment near Berlin in November 2019 and began construction in February 2020. Tesla relied on nearly 20 advance approvals from the state of Brandenburg. Musk originally wanted to produce at Grünheide from mid-2021. However, the approval took longer than planned, in part because Tesla only registered a battery factory afterwards. This is still under construction.

The Model Y Performance, a mid-range car weighing around two tons with an official range of a good 500 kilometers, will initially be produced in Grünheide. The company specifies the starting price at 63,990 euros. The new factory puts German manufacturers under pressure. However, they now also rely heavily on electric cars and have comparable models at first.

The Federation of German Industries (BDI) praised the relatively quick implementation of the project. “Tesla’s beat should serve as a model for investment projects in Germany,” BDI president Siegfried Russwurm told the German Press Agency. IG Metall also welcomed the launch of the Tesla factory. However, when it comes to working conditions, Tesla is lagging behind in an internal German comparison, district manager Birgit Dietze said.

Tesla founder Musk also wants to get people excited about his factory. He said that with regard to climate change, the problem will be solved. “This factory is a big step in that direction. (…) Believe in the future!» The 50-year-old then tweeted: “Thank you Germany!!” and provided the short message from him with four federal flags.