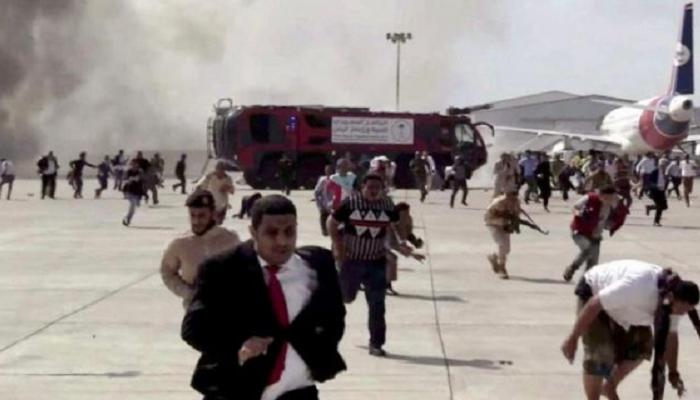 One night, Abdul Karim Salem completed the Maghreb prayer with his friend at a mosque near Aden airport, then went outside to exchange conversations before a huge explosion hit the scene.

Salem fell instantly and was unaware of his friend’s fate, but waking up in the Republican Hospital, he saw many corpses beside him, among them charred, while groans filled the outskirts of the hospital, then he learned later that a car bomb exploded. a few meters from the main gate of the airport and caused a horrific massacre.

The explosion occurred on October 30, as one of the 4 deadliest and most horrific Houthi terror attacks and missile attacks that hit the airport and the city of Aden in less than a year and targeted the assassination of senior officials. from the Yemeni government, anti-journalists from the militias, and many citizens.

These crimes are the attack on the Aden International Airport in December 2020 and 3 bomb attacks on the convoy of the governor of Aden and the airport gate and the journalist Mahmoud Al-Atami and his wife Rasha Al-Harazi between October and November 2020. 2021, which a recent human rights report highlighted as crimes he carried out.

The report issued by the Aden-based non-governmental organization “Haq” for rights and freedoms, and received by “Al-Ain Al-News”, was entitled “The crimes of the terrorist bombings in Aden: serving of the Houthi terrorist brotherhood and of ISIS”, and showed for the first time a total death toll of the victims of the four terrorist operations, estimated at 171 victims. Of them, 29 dead and 142 wounded. 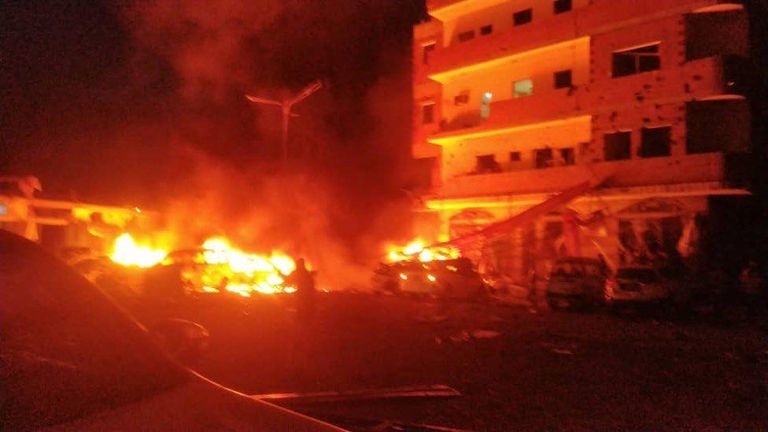 The report presented testimonies from survivors and the results of investigations by the judicial and security authorities, all of which demonstrated the involvement of the Houthi militias and their position behind the bombings and attacks that hit the temporary capital, Aden. In another chapter, he refuted the lies in one of the Muslim Brotherhood human rights organizations’ reports, as part of the Adeniya guillotine to expose the Houthi-Brotherhood alliance.

The testimonies of the wounded and the families of the dead mentioned in the report reveal a great amount of physical and material damage caused by the terrorist attacks of the Houthi militias, which were carried out in the footsteps of the terrorist organization ISIS. through car bombs.

There are still traces of shrapnel on the bodies of those who survived these Houthi bombardments, which left deep psychological pain on the victims, their families and the Adeni and Yemeni community as a whole.

In a video testimony seen by Al-Ain Al-Akhbar, a survivor of the Aden airport gate bombing attack named “Saleh Muhammad” and who worked at a nearby shop at the site described it as a “black day”. , saying: “I went to the Maghreb prayer and returned to the workplace to open the shop as usual, but suddenly the world turned black and I immediately fell into a state of fainting. I felt that I was under the rubble, and all around me was darkness, blackness and fires burning.”

He continued, pointing to the remains of the wounds on his body: “I was yelling what happened, but no one answered me. place and claimed many lives, and that I was one of those who survived.

These treacherous operations not only harmed or injured bystanders of civilians or merchants and workers, but even families who were safe in the houses were hit by shrapnel.

Muhammad Ahmad al-Hajj Banafa says that “he and his family were safe in the house before the explosion shook the place, destroying large parts and causing the collapse of 3 floors of a building in which several families live, especially the side directly opposite the explosion.”

In a testimony documented by the organization “Haq” and seen by “Al-Ain Al-Akhbar”, he added that the atrocious explosion injured him with small shrapnel, while several shrapnel penetrated parts of the body of grandmother Khadija Banafa, and another relative he was injured in the body and in the bone of the hand.

These testimonies indicate that ISIS-Houthi crimes exceeded the operations of terrorist organizations, which put Yemen’s temporary capital, Aden, at the top of lists for car bomb and explosive device attacks.

The Houthi Brotherhood and Crime Laundering

According to the report, which is published by “Al-Ain News”, parts of it and court documents for the first time, all the evidence and inferences of the perpetrators involved in the treacherous operations in Aden proved that they were carried out by the Houthis. Iranian-backed militia, exposing the undeclared alliance with the Brotherhood.

The report accused a Geneva-based Brotherhood organization funded by the Yemeni Brotherhood of deliberately providing human rights cover for Houthi terrorist militia cells and terrorist organization cells in Aden, as part of what it described as the “servants of the Houthi-ISIS Brotherhood”. .”

The report refuted the fabricated accusations that the “SAM” Brotherhood organization, in one of its reports, attached to the southern forces, alleging the arrest of North Yemeni citizens working in Aden, in a report issued in July last year, stating that 40 cases of rape had been registered in the temporary capital within a month. 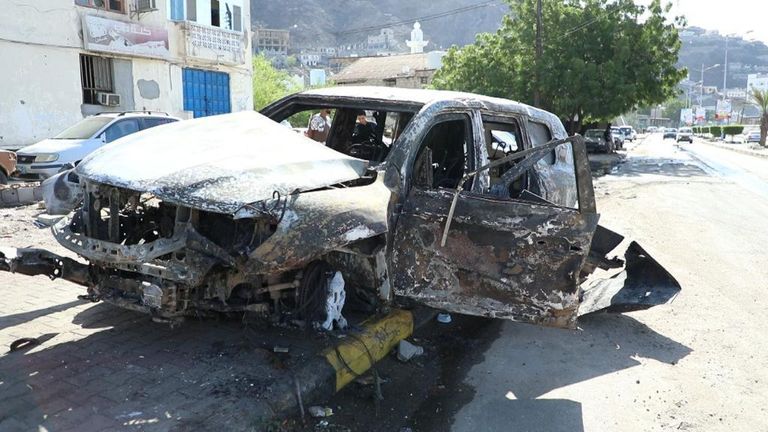 The Organization for Rights and Freedoms “Haq” considered that the reports of the Brotherhood were involved in politics and lacked precision and evidence, since an investigation process was not carried out and it was based on information and indirect sources, which it qualifies as a systematic political plot to attack southern forces, and has nothing to do with human rights work.

In one of the incidents, the Brotherhood claimed the arrest of 8 civilians living in an apartment in the residential town of Enmaa in Al-Buraiqah, north of Aden, and it turned out that after the “Haq” organization pushed a team field to collect documented testimonies from the residents of the area and make copies of the case registered with the judicial and security authorities, and submit it to compliance, it was mere fabrication.

The report revealed that all the evidence, including the indictment prepared by the Aden Criminal Prosecutor’s Office, showed that the detainees were part of armed Houthi cells, and were caught in flagrante delicto in possession of weapons and sums of money and fled. by elements trained by Iranian-backed militias. 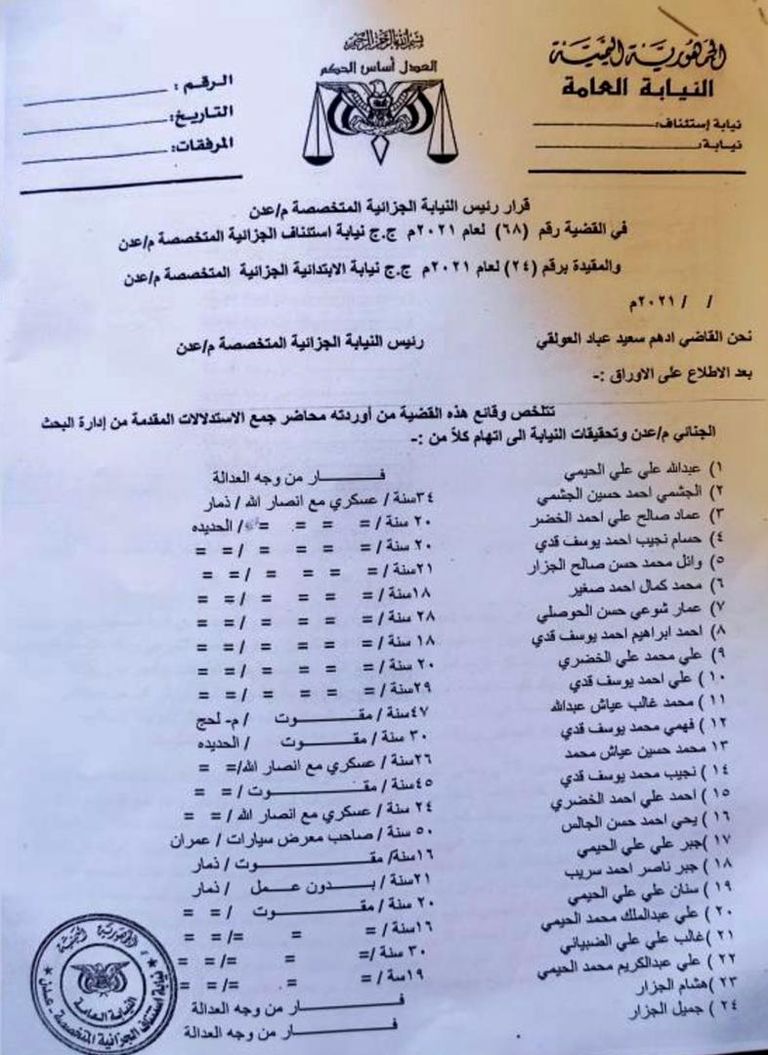 According to the accusation of the judicial authorities, a copy of which was published by the report and verified by Al-Ain Al-Akhbar, the number of detainees amounted to 36 people, including 15 members who participated in the formation of an armed gang linked to the Houthi militia, while 13 elements were classified as infidels, Houthi military trainers, while the rest of the accused were sanctioned.

The arrested elements admitted carrying out terrorist bombings in Aden that claimed the lives of dozens of innocent people, as well as carrying out assassinations in Lahj and Aden governorates of anti-Houthi soldiers, officials and imams of mosques, which made it necessary to refer him to a judicial process to enforce the principle of justice.

This evidence points to the suspicious role played by the soft weapons of the Brotherhood, which fall within the framework of selectivity, politicization and dispossession of human rights work of its noble purpose at the service of local and foreign political and partisan agendas aimed at to undermine the south, their cause. , Yemen and Arab coalition countries, according to the report. 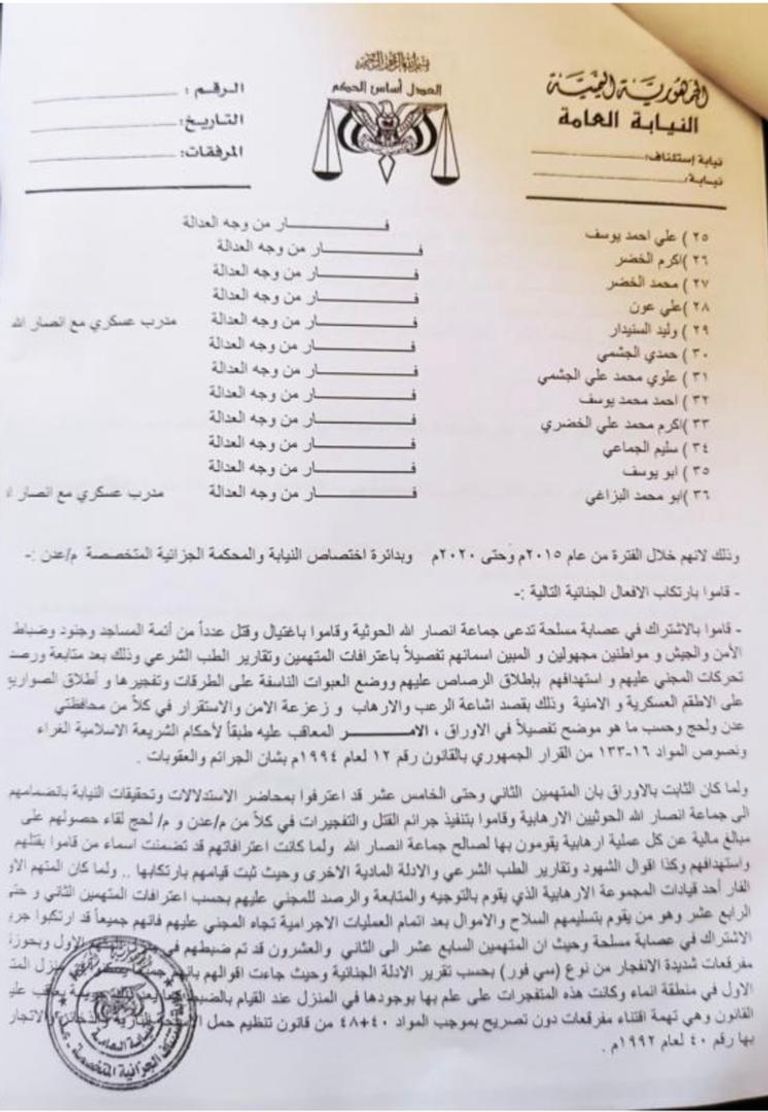 Yemeni jurists have unanimously agreed that the Houthi missile attack on Aden airport and the terrorist bombings against senior civilian officials and journalists in Aden last year are legally classified as “crimes of international terrorism” and crimes of war that meet all the conditions for imposing the harshest penalties. about those involved, executors, financiers and supporters of them.

Two lawyers and a judge told Al-Ain News that the Houthi attacks and bombings in Aden are considered major “terrorist acts” because they employ the extreme fear and panic of the general population for political gain, and are criminalized in accordance with the Geneva Convention for the Prevention and Resistance to Terrorist Acts of 1937 and the Montreal Convention for the Suppression of Unlawful Acts and Acts Directed Against the Safety of Civil Aviation of 1971.

The bombings and attacks directed mainly at Aden airport are also classified as a “war crime” that meets the conditions and elements in accordance with the statute of the International Criminal Court, since the target facility is a known civilian object of great importance. importance to civilians. , whose conventions of international humanitarian and customary law prohibit the attacks, according to legal experts.

The human rights report by the “Haq” organization made several recommendations, including a call to the Yemeni presidency and the internationally recognized government to free civil and security agencies and institutions from the Brotherhood’s rule, following evidence that proved their use of the Houthi Militia, which is classified as a terrorist group.

He stressed the importance of supporting the security institutions in Aden so that they continue fighting terrorism and ensuring the work of the judicial authorities and providing their requirements. He also called on the judiciary to quickly decide on terrorism cases to win justice.