Tens of thousands march across the country for peace in Ukraine 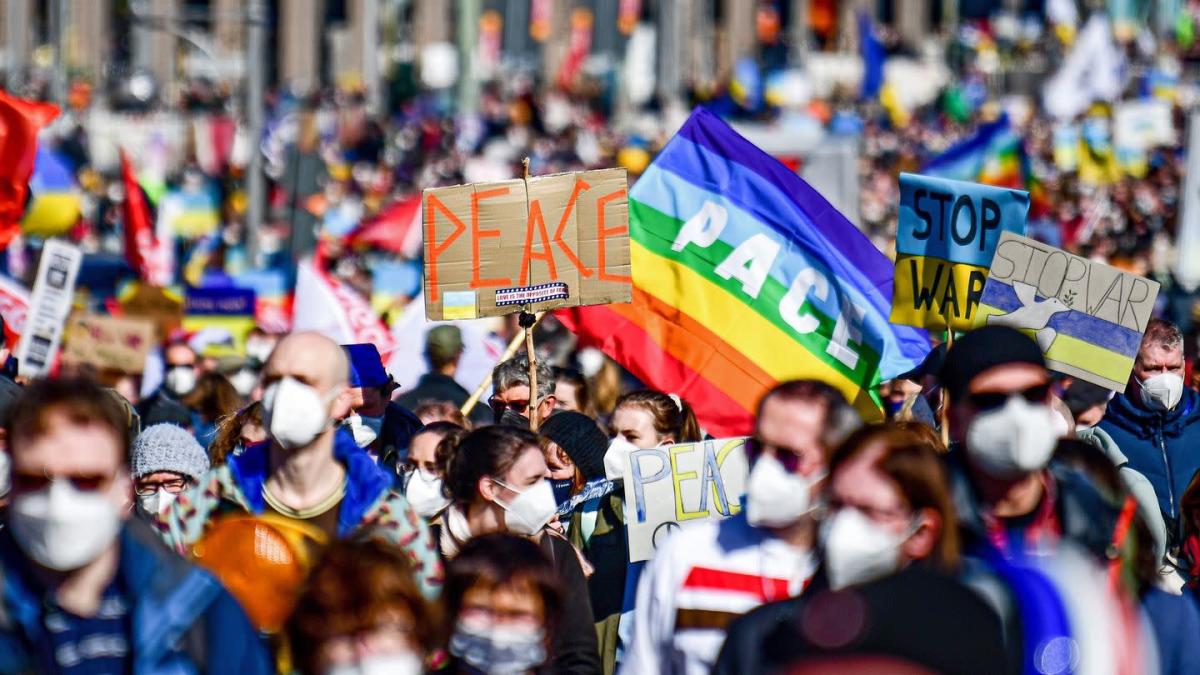 According to the organizers, 125,000 people demonstrated nationwide for peace: 60,000 people in Berlin, 35,000 in Stuttgart, 12,000 in Frankfurt, 10,000 in Hamburg and 8,000 in Leipzig An alliance of organizations for peace, human rights, protection of the environment and the unions had the demonstrations and called churches.

They demand that Russian President Vladimir Putin immediately cease all attacks, withdraw from Ukraine and restore the country’s territorial integrity.

In Berlin, protesters ran from Alexanderplatz to the Brandenburg Gate. The police spoke of 20,000 to 30,000 participants, the organizers of 60,000. Among them were young and old, families with children also participated. Some had balloons in blue and yellow, the colors of Ukraine.

Others carried banners with inscriptions such as “Stop the war”, “Peace” or “Where is the vaccine against war”. Insults against Russian President Vladimir Putin could also be read, such as “Master of War” or “Fuck you, Putin.” 550 policemen were on duty. The atmosphere in the capital was peaceful, most of the participants wore masks.

On February 27, three days after the start of the war, more than 100,000 people demonstrated in Berlin. This time, in the middle of the Berlin demonstration, a Düsseldorf carnival float drove along with a huge papier-mâché Putin shoving Ukraine down his throat.

The motif with the saying “Suffocate!” comes from Düsseldorf Jacques Tilly, who designs and builds carnival floats. The carnival procession in Düsseldorf has been postponed due to the corona pandemic. The car was brought to Berlin on a private initiative.

In Stuttgart, some 35,000 people protested against Putin in the Upper Palace Garden in front of the opera house, which was decorated with a large Ukrainian flag. Many people were holding Ukrainian flags and flags with peace doves or peace signs in their hands.

The signs carried slogans such as “Put down your arms”, “We are Ukraine” and “Russia out of Ukraine”. “Please help us” was written on a poster by Marianna Huisiwa, who fled two weeks ago shortly after the outbreak of the war. The 30-year-old stayed with a friend and was shaken by the war.

Russian woman at demonstration: “I am against the war”

Thousands of people also gathered in Frankfurt am Main. Many families with children were among the participants. Strollers and baby carriers sported Ukrainian flags and self-made signs calling for peace. The Russian could also be heard in the crowd at Opernplatz.

10,000 people on demonstration in Hamburg

According to the organizer and the police, at least 10,000 people attended a demonstration at the Jungfernstieg in Hamburg. The organizers of the rally demanded that the Russian government immediately stop all attacks and withdraw from Ukraine. According to police reports, as many as 30,000 people took to the streets of Hamburg last weekend against the Russian war of aggression.