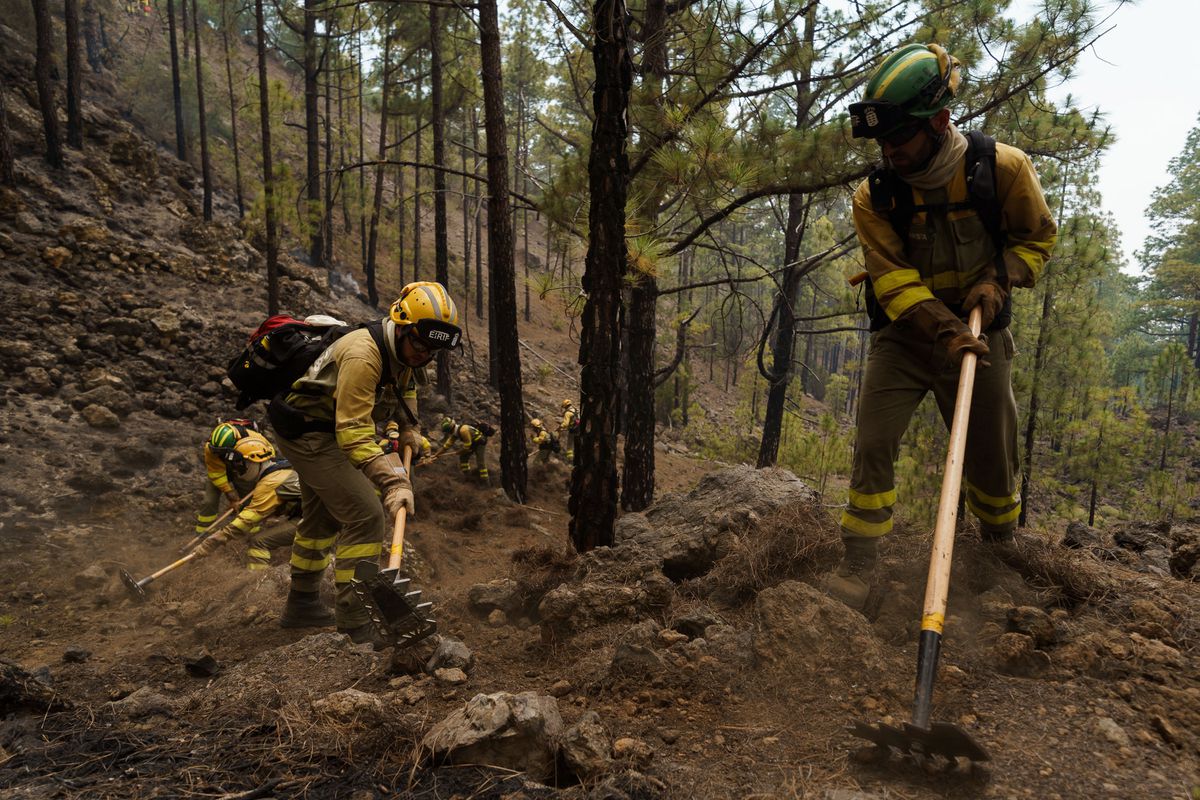 The fire that broke out this Friday morning in the municipality of Los Realejos, north of the island of Tenerife, has already burned 500 hectares of forested land and caused the precautionary eviction of 31 people this Thursday, according to the Ministry of Public Administration, Justice and Security of the Government of the Canary Islands. The affected area has a circumference of 11 kilometers and also affects two other municipalities: San Juan de la Rambla and La Guancha.

The aspect that most worries those in charge is the left flank heading towards Teide National Park, the largest and oldest of the national parks on the islands, although there are no fears that it will reach populated areas. The fire “increases some important races on the mountain”, Montserrat Román has condemned in this regard in statements to the Canarian public television. In addition to the ecological value of the environment, the orography of this country makes it “more difficult to fight the fire”.

Weather conditions are expected to improve tonight with lower temperatures and higher relative humidity. The forest area of ​​the Canary Islands is almost 137,000 hectares, according to the Fourth National Forest Inventory by the Ministry of Ecological Transition and Demographic Challenges. The Minister of Public Administration, Justice and Security, Julio Pérez, explained that it is necessary to take advantage of this weather improvement, which if the forecast is met, will last until Saturday noon to bring the fire under control, as this is to be expected be off Then the temperatures will rise again.

The police are currently investigating the causes of the fire, which occurred in an area where another attack had taken place two weeks ago, as confirmed this Friday by the President of the Canary Islands, Ángel Víctor Torres. The head of the autonomous executive stressed that it was not yet known whether it was intentional or not, and in this regard demanded that specialists be allowed to work. The firefighting facility consists of 170 ground personnel, they are part of the firefighting facility supported by the safety, health and logistics operations until they exceed 250 professionals.

Efforts by emergency teams have been focused on the right flank of the fire, assured Montserrat Román, director of civil protection and emergency response for the Canary Islands government. Equality Minister Irene Montero visited the Advanced Command Post in San Juan de la Rambla this Friday afternoon to see “firsthand” the evolution of the emergency. Montero has expressed “appreciation” for the work of the fire and emergency services and also the Red Cross, which has organized camp at the community pavilion in case further evacuations need to be carried out.

- Advertisement -
Share
Facebook
Twitter
Pinterest
WhatsApp
Previous articleRodrigo De Paul’s ex defends himself and says he doesn’t want to hurt the player
Next articleA love that shakes the networks: the ingenuity of a father who has no money to buy a Big Mac for his son