Temperatures are rising in a “last fireworks display” of heat through Sunday, when thermal relief arrives through Wednesday 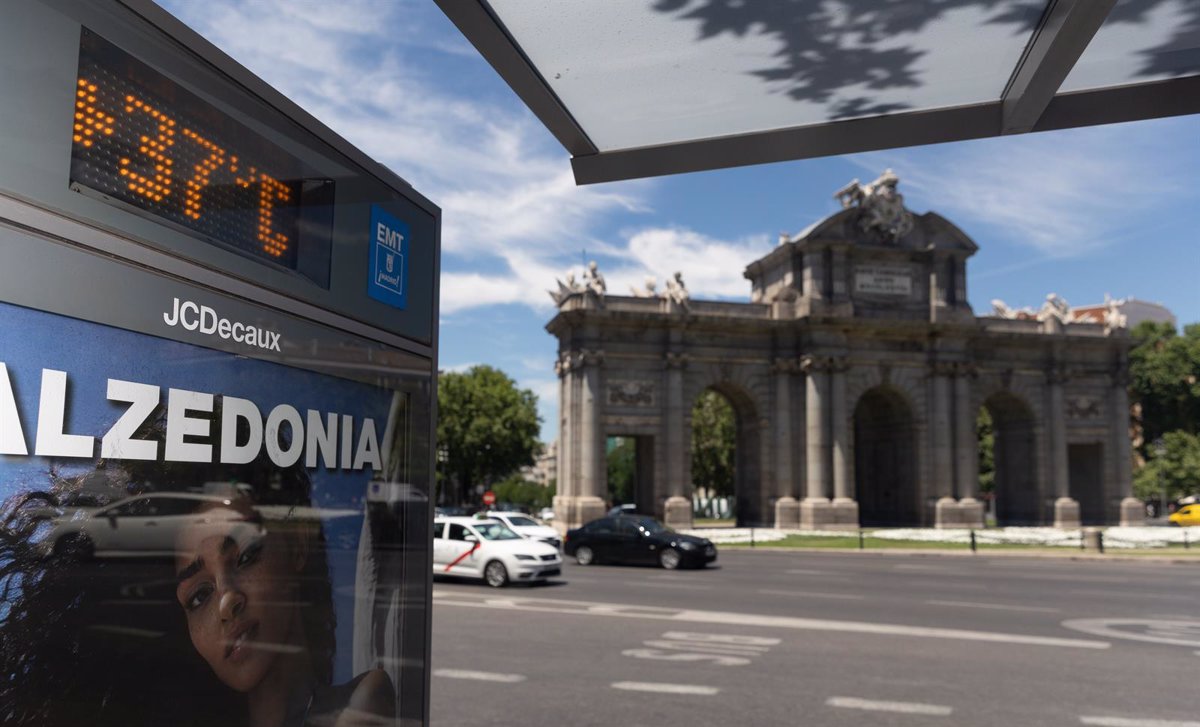 The intense heat is set to continue in the coming days as temperatures across much of the country are set to soar to above 35 degrees Celsius (ºC) between Thursday and Saturday, according to the State Meteorological Agency (AEMET), which anticipates the change in weather it will arrive next Sunday.

Thus, the spokesman for AEMET, Rubén del Campo, believes that next weekend will be “the last firework display” of this situation “of very high temperatures, which has been going on without a break since the beginning of July”.

In this way, he expects that in the Mediterranean regions and in the Balearic Islands it will be “particularly hot” on Friday and Saturday as the maximum temperature of 40ºC will be exceeded, adding that the nights will be hot in the regions – at least more than 25 ° C Mediterranean until Saturday.

“Starting Sunday, we expect a change in the prevailing atmospheric configuration in our country,” announces the spokesman, who predicts the arrival of consecutive low points on consecutive days, accompanied by cooler air at the surface, which will cause temperatures to drop. in most parts of the country.

The speaker recalls that the troughs are a type of cold air tongues associated with low pressures, the high levels of the troposphere, sometimes isolated from the jet stream that drives them, resulting in isolated depressions at high levels of the atmosphere (DANA) .

So she predicts that from Sunday, after several weeks of high temperatures that put the thermometers in the west of the peninsula at even slightly cooler values ​​than usual for this time of year, there will be a thermal relief a situation that will probably be half will continue for the next week. However, it is noted that the temperature drop will take longer to be felt in the southern and eastern thirds and in the Balearic Islands.

On the other hand, Del Campo points out that the waters of the Mediterranean Sea are still very warm, with a “very high” surface temperature between 28 and 30ºC between the Balearic Islands and the Levantine Peninsula. In particular, he said that the Puertos del Estado buoy in Valencia reached its water temperature record of 29.7ºC on August 9, one degree higher than the previous thermal record recorded in August 2015.

THE WATER OF THE MEDITERRANEAN WITH RECORD HEAT

After the time change, the water temperature begins to cool down after practically three months, from mid-May, with above-average warm values.

At the moment this Thursday, atmospheric instability will be reduced and skies will be partly cloudy, although there will be storms in the northern third, some of which may be violent in mountainous areas. “The highlight on Thursday will again be the heat,” said the spokesman, who expects temperatures to rise in the north-west, while there will be no major changes in the rest.

In the Balearic Islands, the Ebro Basin and eastern Cantabria, they can exceed 36°C or 37°C, and even in Bilbao they will be around 40°C, as well as in Granada or Jaén, while Pamplona or Zaragoza will reach 38°C. The early morning will also be very hot and in large areas it will not fall below 23 or 24 °C, in Almería, Alicante, Málaga or Valencia even 25 °C, but also in Madrid or Ciudad Real.

For Friday, he reports that skies will be cloudy in the Bay of Biscay, where temperatures will drop “significantly” if winds blow from the west, while they will be slightly cloudy in the rest of the country, but with developing clouds that will be in isolated thunderstorms in mountain areas.

On Saturday, as the first low point is approached, the atmosphere will become unstable and evolutionary clouds will grow in much of the territory and stormy showers are expected mainly in the afternoon in the north and south-west of the peninsula and are not excluded in other areas of the interior. Temperatures will start to fall in the western half that day, but there will be a “significant increase” in the Mediterranean Peninsula and Balearic Islands regions. Temperatures will be up to 10°C higher than normal in the northern, eastern and southern thirds, and even slightly higher in the Balearic Islands.

Del Campo states that they will be or will reach around 40ºC in Granada, Lérida, Zaragoza, Pamplona, ​​Logroño, Valencia and the Balearic Islands, 42ºC in Córdoba or Jaén and in Murcia and inland of the Valencian Community even reach 43 ° C . The nights will be hot in many places like Malaga, Jaén, Valencia or Almería.

THE FINAL BLOW FOR THE EXTENDED HEAT THAT ARRIVED IN JULY

After this “last fireworks display”, the spokesman explains that on Sunday, as the trough progresses westward, a “strong” drop in temperature will begin in most of the country in the west, but which will remain very high in the basin del Ebro, Mediterranean regions, on the Balearic Islands and the South East.

For example, it is reported that they will remain around 23ºC in Santander and around 30ºC in Madrid, while in Palma de Mallorca they will be 36ºC on Sunday, in Alicante and Valencia 37 or 38ºC and in Murcia 40 ° C after an “extremely warm” morning in the Mediterranean.

On the other hand, it forecasts storms that may be locally strong, particularly in the Pyrenees and Iberian system, to form in the north and east of the peninsula on Sunday.

“It is likely that the drop in temperature will continue for the first few days of next week, with the arrival of consecutive lows that will lead to rain,” the spokesman confides.

That way, he expects the showers to affect the northern third and for the environment to get cooler, especially in the north, west and center of the peninsula, although the intense heat will “still” persist through the first half of next week, with highs above 35°C at least until Wednesday in the Ebro Basin, Mediterranean and Balearic regions and very hot nights in these areas.

With regard to the Canary Islands, the spokesman indicates that the trade wind regime will prevail in the next few days, which will blow with “certain intensity” in the exposed areas. Temperatures will rise in the archipelago over the weekend and may exceed 30ºC in Lanzarote, Fuerteventura and southern Tenerife and 32ºC in southern Gran Canaria.

Previous articleSamsung Galaxy Watch 5 vs Galaxy Watch 5 Pro: Here are the differences
Next articleOutlander: This is what Caitriona Balfe’s casting video looked like for the role of Claire