Technological espionage: the incredible rescue of a Soviet submarine organized by the CIA 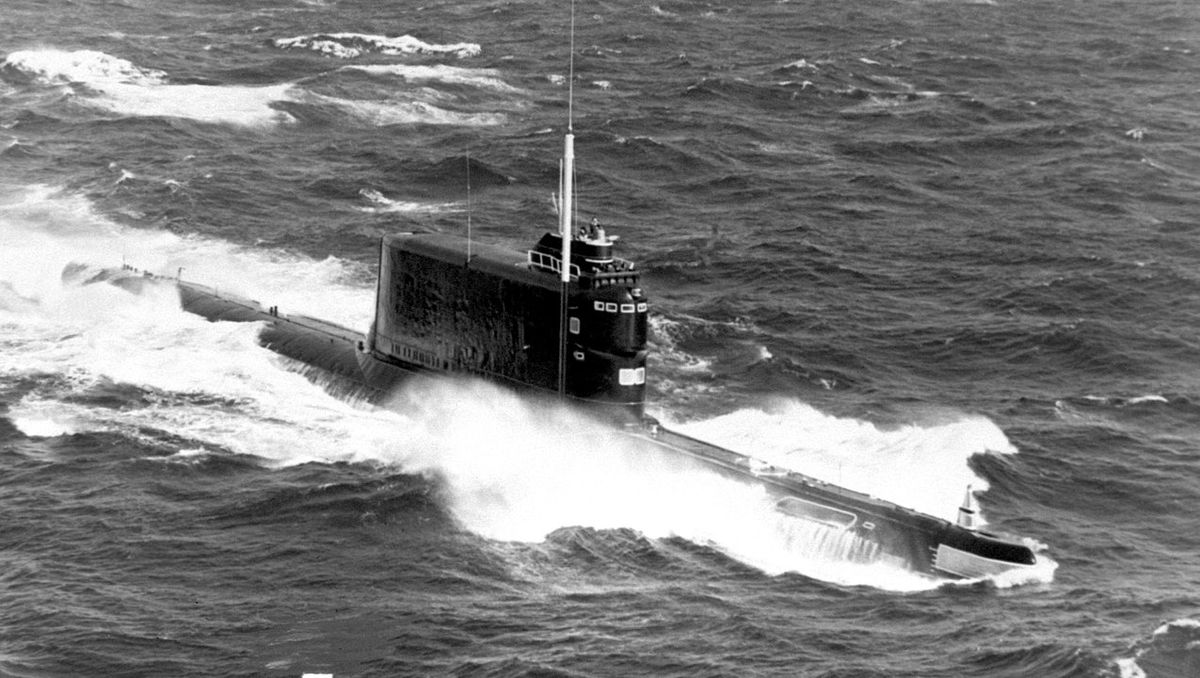 In the early hours of March 11 and 12, 1968, hydrophones on the bottom of the Pacific recorded two underwater explosions. By measuring the delay recorded by each station, they were able to determine its origin and probable nature: Just beyond the International Date Line, about two thousand kilometers southeast of the tip of the Kamchatka Peninsula, a submarine had just suffered a terrible disaster.

It was a Soviet, specifically the so-called K-129, which had left its base in Petropavlosk on routine patrols a few days ago. It wasn’t a particularly modern, but aggressive diesel model: it was loaded with three one-megaton nuclear missiles, each capable of destroying a city.

The Soviet Admiralty immediately dispatched rescue ships to the area where they suspected the sinking, a move that alerted Western intelligence agencies. But the operation was unsuccessful. The sea depth in the area was almost 5,000 meters. After two months of unsuccessful attempts, the search was called off. The K-129with its crew of 83 men, was considered lost without the causes being able to be determined.

The incident intrigued the US Navy enough to investigate what happened. Six months later, he sent another submersible to the area, the Halibut, cWith the mission to locate and photograph the remains to be found at the position marked by the hydrophones.

That halibut It was an old nuclear submarine that was adapted to be used for “special operations”. A fancy way of saying “spy”. The missile launch pad was removed and reinforced with equipment no other sub had: precision satellite targeting systems, state-of-the-art sonar, and a univac computer. And a few wired scout pods too. They were appropriately called “the fishes”. Fish that weighed two tons and cost five million dollars each.

For two months the halibut He came and went through the area where the explosion had been spotted, towing a “fish” in search of the remains of K-129. It wasn’t an easy operation. The robot had to fly a few meters above the ground, which required a tow rope of more than eight kilometers. The submarine was forced to maintain an extremely precise course and speed lest its payload sink into the bottom. To avoid obstacles in total darkness, the “fish” had only the pulses that its sonar sent to the ship’s controllers halibut. It also carried some cameras and great depth searchlights, but the beam only illuminated a limited area of ​​the ground. The remains of the shipwreck should eventually appear in this small rectangle of light.

The team took tens of thousands of photos of the ground. The majority, unassuming, though in some abysmal Pisces seemed clueless. But the effort finally paid off: one of the images showed part of the conning tower of a submarine. It was so close that it was necessary to put together a mosaic of several photos to get an overall view.

It was K-129, lying in the ground on her starboard side. It was divided in two: the bow section was about a hundred feet long. The one behind, with the propulsion equipment, had landed a few tens of meters away. The part of the tower where the three vertical rocket tubes should have been was damaged. One had disappeared, perhaps from an explosion; the second appeared empty, but the third retained the seal protecting the rocket. And inside the fuselage there are other interesting devices to be found, such as encrypted transmitters and code books.

The interest of the CIA and Nixon

The American commanders discussed the possibility of opening a hole through which a submarine robot could enter and possibly recover an element. But the idea was soon abandoned. The potential loot did not justify the cost and complexity of the operation. The K-129 was an old submarine. In the three years since its sinking, much of its equipment – particularly its missiles – had become obsolete.

By then the Navy had been in control of the operation. But when the CIA found out about the discoveryhis specialists devised a much more daring plan: to recover the entire bow section of the submarine and its contents, including missiles and torpedoes.

The project reached the ears of Henry Kissinger and thence to President Nixon. Both were smitten and thus began an operation worthy of the best spy novels.

The CIA commissioned the construction of a giant ship to serve as a platform to lift the submarine. At 180 meters long, it was longer than a destroyer of the time, its superstructure was topped by a turret similar to those used for drilling oil wells, and fore and aft it had propellers embedded in the hull to to allow fine position adjustment at anchor.

The project was classified as top secret, but of course the construction of such a strange ship did not go unnoticed, so a curtain had to be found to hide its real mission. The CIA found someone it had branded a trustworthy patriot: Howard Hughes, the paranoid millionaire living in seclusion on the top floor of the Desert Inn in Las Vegas. Hughes agreed to start a shell company dedicated to mineral exploration on the sea floor. To make it perfectly clear, the ship would bear his name: Hughes Glomar Explorer. Officially, it was nothing more than a platform for collecting manganese nodules on the bottom of the Pacific.

At the same time, the agency had hired another key piece: Lockheed Aircraft. This company had experience in top secret jobs including building the legendary U-2 and SR-71 spy planes. Lockheed would be responsible for preparing the mechanism of the giant claw capable of grabbing the submarine to lift it to the surface. The device would be worn to Glomar Explorer in a submersible to be able to install it under its keel without fear of prying eyes, and once the operation is complete the same raft would serve to hide the trophy.

After almost four years of preparation and a long journey, the Glomar Explorer In the summer of 1974 he reached the point where he should do his job. It was a relatively calm time at sea, a calm that would not last more than a few weeks. First, it had to be ensured that the ship always remained on its target. Sonic beacons were installed on the ground and also the connection to navigation satellites. There was no GPS yet; only military transit satellites, which functioned essentially by exploiting the Doppler effect and offered less accuracy than a current car navigation system.

The catching claw would not be lowered onto a cable of rigid tubing made up of ten meter sections neatly stowed in the hold. Each new section was assembled using the “derrick” located amidships. A crane drove in vertically from above and a vise grabbed it and threaded it in with the section directly below. The entire structure could tilt to compensate for fluctuations. The system was inspired by the drills used in oil exploration, although of course no attempt was made to work at a depth of 5,000 meters.

Just as the surgery was about to begin, the Glomar Explorer got the sight of a Russian sea ship. He was bristling with antennae, suggesting an interest beyond mere science. But the official explanation that it was an underwater mine test was enough to convince their captain that he wished them luck.

More than five hundred pipe sections had to be assembled to get to the bottom. At six minutes per section, and allowing for inevitable delays, the operation would take weeks. When the thousand-meter mark was already passed, a new visitor appeared: a Russian deep-sea tugboat, also fascinated by this strange ship. Again, the explanations were convincing. Even if the Soviets had launched divers, all they would have seen was a long tube sinking into the depths, something completely innocent. That yes, the tugboat would continue in the area, curious what the “mining” operations were developing.

Finally, thanks to the adjustment, the catch mechanism was placed accurately on the submarine by several propellers driven by electric motors. It was not a simple claw, but a four-legged frame that rested on the ground when the jaws closed around the submarine’s hull. Hydraulic pistons should raise it off the ground without straining the long lift tube. Video and sonar cameras would allow the entire process to be followed from five kilometers up.

Thus began the slow rise of the dam. To reduce the load, the legs and butts were left on the seabed. It would take more than two days of effort as the ship creaked under the combined weight of the submarine and lift tube. When they had already covered more than two kilometers in height, part of the fastening nails suddenly gave way. The sub’s hull, already severely weakened, split in two and most of it sank back to the depths, taking the missile bay with it. Upon hitting the ground, it shattered into hundreds of unrecoverable pieces. Only a relatively small piece remained in the jaws and was hoisted on board.

An inspection of its interior found a few torpedoes but no communications equipment or code books. At least that’s the official CIA version.. Also the remains of six crew members, four of whom could be identified. on board the Glomar Explorer A funeral was held according to Russian and American tradition and the bodies were returned to the sea. The ceremony was filmed by agency staff and years later turned over to Russian authorities. The film about the rest of the operation remains secret.

The salvage of the K-129 submarine was a splendor both from a technical point of view and because it was carried out in the strictest secrecy. And it would have stayed that way if some press leaks hadn’t uncovered the operation in March 1975. Since then there have been many attempts to find out details about what goes under the code names “Azorian” or “Project Jennifer”. Over the years, half a dozen books have been written based on firsthand interviews with protagonists. The CIA also published a very generic version, still with censored paragraphs. But the true, complete story remains hidden in a highly secure file.