Tebas: “There must be no equidistance between victims and perpetrators in football” 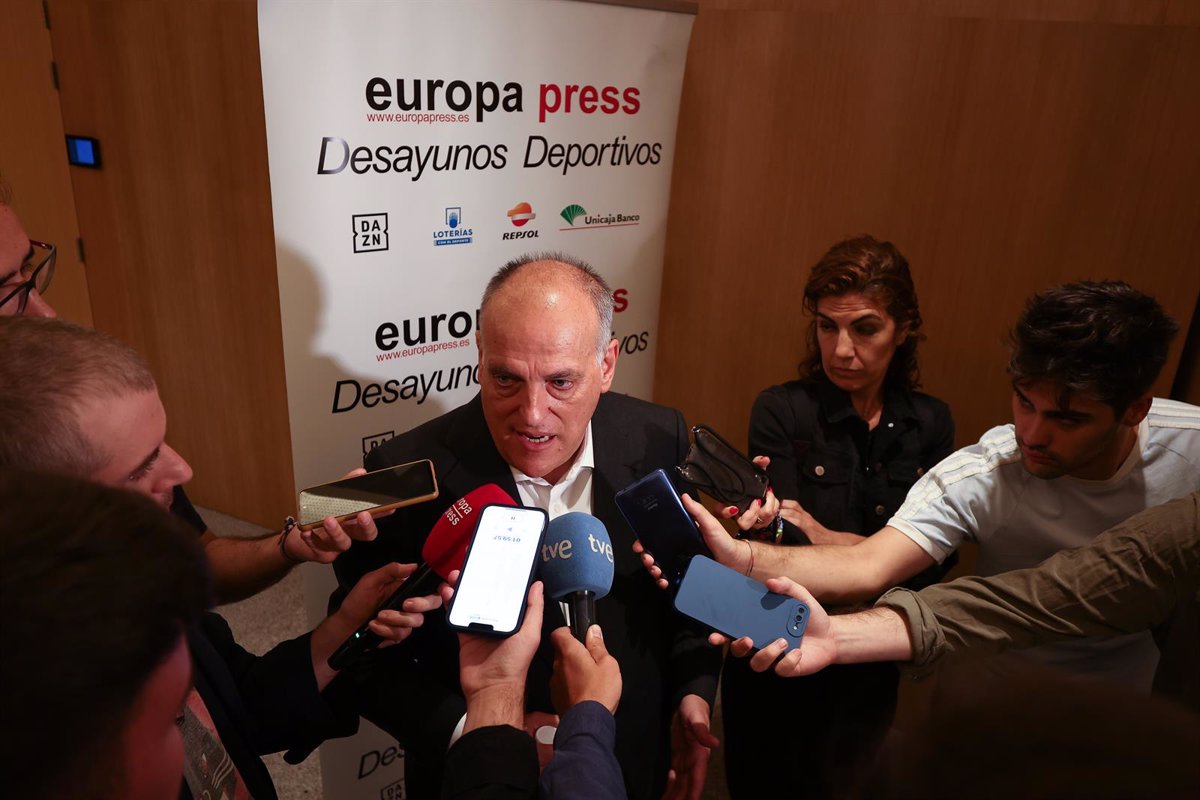 LaLiga President Javier Tebas insisted this Thursday that “there is no war” between his body and the RFEF and that there are “some victims” among which he and other personalities have been recorded, for which he has the ” there” demanded cannot be equidistance to those who harm football.”

“There is no war between the RFEF and LaLiga, here there are some victims registered as José Guirao or Irene Lozano. There was a person who traveled to New York with the girlfriend and did not make a statement or who has 260 Millions not justified when the court asked for it,” Javier Tebas told the media after attending the Europa Press Sports Breakfast, attended by the President of the CSD, José Manuel Franco, and those of Repsol, DAZN, LAE and Unicaja Bank was sponsored .

In this sense, Tebas made it clear that he was “against” the words of Franco in his speech on the state of Spanish football. “Let’s not be mistaken, no club has reported me for coercion and threats and as far as I know the president of the RFEF women’s football and the First and Second RFEF. There can be no equidistance between the victims and those who do they harm football as the RFEF does,” he warned.

The President agreed with Luis Rubiales in the forum, but he was ironic. “I didn’t see him, he came at the last minute and ran away,” he said, smiling, before clarifying that he would like “the footage” to come out of Miguel García Caba, RFEF Deputy Secretary General, and by whom he believes “almost certainly ‘kidnapped'”.

“I know him, he worked in LaLiga for many years and I know how he writes, it’s not his,” he claimed in relation to a message on social media, admitting that he was “very surprised” like García Caba is acting.

“What is happening with the RFEF is unbelievable. Now the problem is they recorded Tebas saying he wants to ‘charge’ Rubiales, everyone has known that for a long time and what happened I said it colloquially. It is unbelievable that a president of the association records and sends detectives and there is still talk of a Thebes conspiracy. The one who conspired is Rubiales” stressed the LaLiga president.

On the other hand, when asked whether or not the Administrative Court for Sport (TAD) should intervene in the case, he lamented that “it seems that they are studying a university career for the time they have been,” and analyzed what has happened. “You will know, there is no doubt that the facts will probably lead you to the TAD,” he said.

“The ‘theorist’ García Caba has accused me of buying LaLiga the TAD, but since he has no idea, he doesn’t know that I directly opposed it when its members were elected, since he is a member of the CSD board was, Irene Lozano is a witness, so frontal that I think it cost me my position because Irene Lozano got me out of the next appointment of this commission,” he stressed.

In addition, he also criticized the President of the COE, Alejandro Blanco, for the notes he would have of the meetings for the Olympic candidacy of Catalonia and Aragon. “It’s incredible that, to defend himself, he takes out some footage of people who didn’t know breaking through the barriers of ethics, and he couldn’t expect it from a President of the COE. If he wasn’t, he would give instructions, but when you go to a meeting, if it’s an institutional meeting and it’s going to be recorded, it’s announced and certainly not much would be said,” he stressed.

THE BARCA WILL BE ABLE TO SIGN IF THE LEVER GIVES HIM “CAPACITY”.

On the other hand, he referred to the levers that FC Barcelona approved last week that could help him sign players like Robert Lewandowski, Bernardo Silva or Jules Koundé. “They are being approved by the convention and now they have to carry it out, get a fund, which it seems they can get with the television issuance and sale of ‘BLM’. You know the numbers and when the levers create that capacity, they can be those signings and some more,” he explained.

Referring to the interview in ‘Marca’ with PSG president Nasser Al-Khelaïfi, who said that Real Madrid offered Kylian Mbappé more money than the Paris team, he reiterated that “it is the position of this nouveau riche who is with money imposing all the rules.”

“He already believes his own lies, but he knows very well that Real Madrid haven’t invested more money. It’s hard to tell so many lies, we will continue to defend sustainability in football,” he added, stressing that PSG “is”. inadmissible” and that “it should also be the case in French football”.

- Advertisement -
Share
Facebook
Twitter
Pinterest
WhatsApp
Previous articleRibera believes that the gas cap “works” and estimates that it has reduced the price of electricity by around 30 euros/MWh
Next articleInternet Archive and Google, first customers of Wikimedia Enterprise