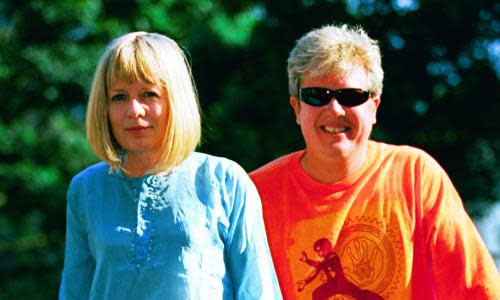 Chris Frantz and Tina Weymouth, the husband and wife musicians who were core members of Talking Heads and the Tom Tom Club, have survived a serious car accident after colliding with a drunk driver.

According to a post by Frantz on Facebook, which accompanied an image of his vandalized Ford SUV, the incident occurred two weeks ago on US Route 1. He wrote:

We were hit head-on by a drunk driver who was driving on the wrong side of the road. Unbelievably, we moved away from the collision. Tina underwent a CT scan and suffered three broken ribs and a broken sternum. She has been in a lot of pain, but she will get better with time. I thank our guardian angels and the Ford Motor Company for building a car that protected us from being killed.

A representative for Weymouth told Pitchfork she was “a little beat up from the accident, but she’s resting and doing fine.” With the type of injury she had, rest is a key part of the recovery process. Chris is taking good care of her.”

On drums and bass, respectively, Frantz and Weymouth formed the rhythm section of Talking Heads, who mixed a variety of styles including punk, funk, and rock before breaking into the American pop mainstream with hits like Burning Down the House. and Road to Nowhere. The couple, who married in 1977, also formed the Tom Tom Club in 1981, a funk and new wave group known for songs like Wordy Rappinghood and Genius of Love.

Frantz wrote about his long marriage and musical life in the 2020 memoir Remain in Love.