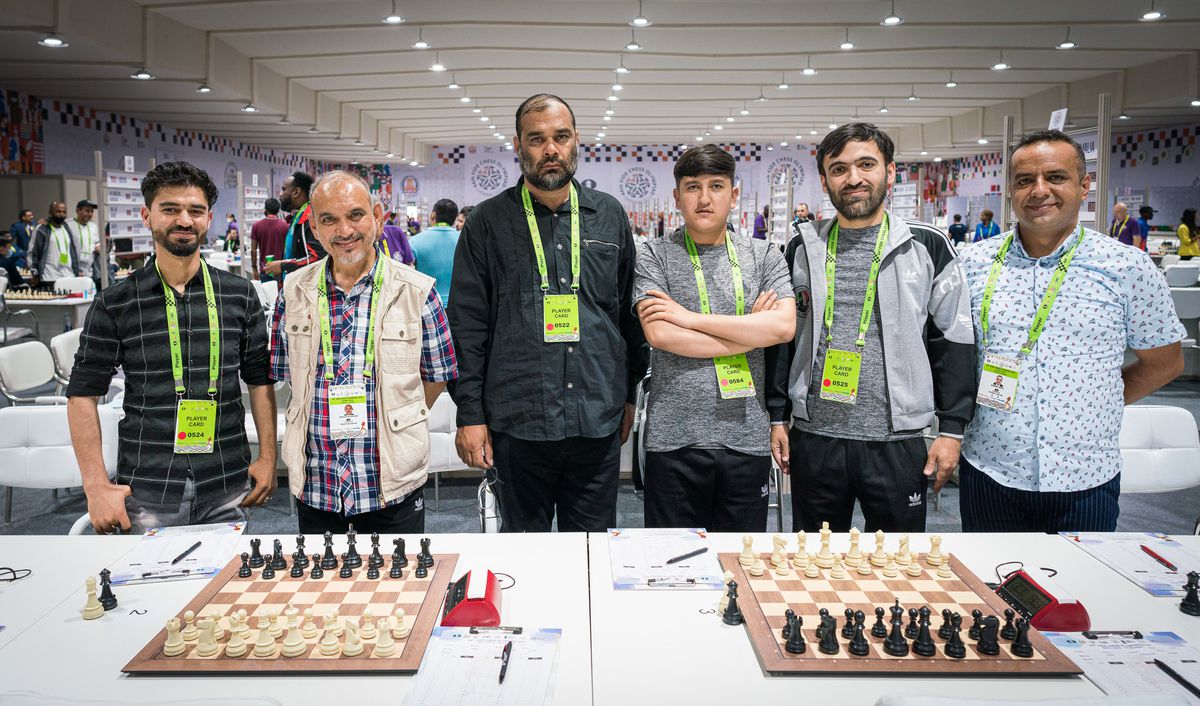 The Afghan team is probably the most excited and happiest of the more than 180 countries participating in the Chess Olympiad in Chennai, India. Until a few days ago, four of his players living in Afghanistan feared a fine or having their hands cut off for playing chess, which the Taliban government banned according to the most radical interpretation of the Koran. Now they’re admitted, and that also nourishes them with a double hope: that girls won’t have to leave school at the age of 11 and that the chess ban for women, which is still in force, will be lifted.

Yerevan (Armenia), Chess Olympiad 1996. Six exhausted Afghans arrive seven days late. More than 1,500 chess players from all over the world stand in a huge hall to receive long applause as they go to their assigned table to play the 7th round. The Afghan capital Kabul had already fallen under Taliban power, but they were coming from the north, still free, on a ten-day journey that crossed three countries by bus and two by plane. The President of the Afghan Federation, Mohammad Esmaiel Jamshidi, then stated that chess had been popular in Afghanistan for centuries: “Chess was learned in almost every household by the age of five; Usually it was the mother who taught the rules. In 1987, under the government of President Najibullah, the Ministry of Education and Science introduced it as a subject in all educational centers, arguing that no other sport displays so many qualities.”

The following edition of the Olympiad (Elista, Russia, 1998) witnessed a similar scene, with Afghan exiles managing to form a team. The Taliban horror in its first phase lasted until 2001 (and longer in some regions of Afghanistan). However, due to a lack of resources, the women’s team was only able to take part in the Olympic Games sporadically, in 2008 (Dresden) and 2012 (Istanbul).

The captain of the men’s team, Khyber Farazi, now explains his hope: “We fought for this permit until the last minute, it’s a great pleasure. Four of the six of us live in Afghanistan and we will be able to return without fear of punishment.” But they are not satisfied with that: “It is very important that we achieve a good sporting result, that we stand out from the teams of our level, because then the government will see that chess can give the country international prestige, and that can also benefit women chess players”.

The third board member, Sepehr Sajawaty, recalls his enormous frustration: “I realize that just to be alive and to be able to play chess is a great privilege. But I couldn’t do it except with my father for fear of fines or something much worse, having my hands chopped off like thieves. The chess situation was terrible, but after weeks of waiting for the news, permission to travel to Chennai finally came.”

“Chess is a fiendish game that boggles the minds of those who play it.” This sentence by the leader of the 1979 Iranian revolution, Imam Khomeini (1902-1989), revealed why the most extreme interpretation of the Koran forbids chess, even though chess is not mentioned at all in this holy book (despite the fact that the Muslims who wrote it brought to today’s Spain in the 8th century, already knew it in the 7th century). In the Middle Ages it was practiced in some countries with bets and dice, gambling or invitation games are forbidden because they can distract the Muslim from the obligation to pray and are also often associated with alcohol consumption. Another problem, but less important, is the ban on games whose figures are figures in relief of people or animals; Therefore, Arabic chess pieces are usually flat.

In addition, according to the radicals, the Muslim warrior has three recommended activities when he is at home: horseback riding, archery and having fun with his wives. Then there is a majority of actions or hobbies that are tolerated; and finally there are the forbidden ones, in which Khomeini included chess. But he corrected himself shortly before his death, persuaded by Iranian intellectuals whose arguments were irrefutable: chess has not been played with bets or dice for centuries; and above all it is a war game and therefore ideal for warriors when they are resting. Today, Iran is one of the great powers of Asian chess, but its players suffer from another problem: they are forced to lose by defeat when playing against an Israeli.

However, everything indicates that the Taliban movement in the neighboring country was unaware of this process when it first took over the Afghan government in 1996. And, like several Iranian professional chess players, the best Afghan players and several managers had to leave them on their feet because their passion for a game that teaches thinking was very dangerous.

Khomeini and the Taliban are not the only enlightened ones to ban a game with more than fifteen centuries of documented history. Saudi Mufti (religious authority) Abdulaziz al-Sheikh argued in 2016 as one of chess’s many virtues: “It makes the poor rich and the rich poor.” He added: “It creates animosity and encourages wasted time.” A few months later, the very famous Turkish Imam Ahmet Mahmut (he blessed President Erdogan and his wife) went even further: “Playing chess is more sinful than gambling or eating pork.” And he added: “The chess players are cursed. They tend to lie more than the rest of the people.” Fortunately, their respective governments ignored them: Saudi Arabia joined the International Chess Federation (FIDE) a few years ago. Turkey is a very prominent country in introducing chess into schools.

The Catholic Church also banned chess at various times and places, arguing that it distracted from prayer, until Pope Leo X (1475-1521) blessed it. The motivation was very different from how a provisional government did it in China while the great leader Mao Zedong (1893-1976) was dying. It was during the Cultural Revolution (1966-1976) when everything that sounded western was banned (despite the fact that there is also Chinese chess, similar to international chess), including Beethoven’s music. Police fined chess players and burned textbooks in town squares. But it was short-lived: in 1991 the world champion was already the Chinese Xie Jun.

In an interview with this newspaper, the captain of the Afghan team, Farazi, speaks very cautiously about his government and gives the impression that he is not telling everything he knows. But he emphasizes: “It is very important that we are here; not only for us, but also for the positive effects it can have, especially for women”.

Previous articlewaterwoman | Air Dates, Streams & Previews | July/August 2022
Next articleMaría Jesús Montero does not rule out an agreement with the PP to approve the bank tax