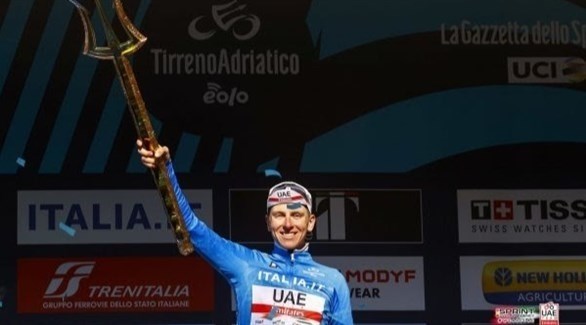 Team Emirates’ Tadi Bogachar has won the overall Tirreno-Adriatico classification for the second year in a row, thanks to his strong solo performance on stage six of the race.

The final stage saw heated competition between the speed specialists, including Tadi Bogachar, who topped the overall classification, and his competitor Phil Bauhaus (Bahrain-Victorius), who came first in the San Benedetto del Tronto stage race.

Commenting on his victory, Tade Bogachar said: “I really enjoyed the race today, overall the whole week has been amazing, I managed to stay strong and focused until the end of the race, everything can change before I cross the finish line. “.

Tadee added: “I am very happy to have managed to win two stages of the race, and I am delighted to be on the podium for the second time in the general classification in Tirreno-Adriatico. I will try to take a break for a few days, before heading Milan-San Remo, which represents the next challenge for me and for the team”.

On the other hand, Team Emirates Joao Almeida secured victory with the white jersey for the best young rider in the race, and Team Emirates managed to top the team classification thanks to an incredible week of performance from the UAE team.

Commenting on the result, Joao Almeida said: “Today’s race was short and tough, with rough terrain and torrential rain, especially when we reached the final slope where I decided to go at a steady pace to avoid risks. Until the end of the race, which allowed me to win a stage of the race, in addition to winning the white jersey, so I’m very happy with the results”.

- Advertisement -
Share
Facebook
Twitter
Pinterest
WhatsApp
Previous articleLower Saxony and Bremen: SPD does not ask Schröder about a trip to Moscow
Next articleCorona in France.. Abolition of the mandatory muzzle circular and vaccination certificate