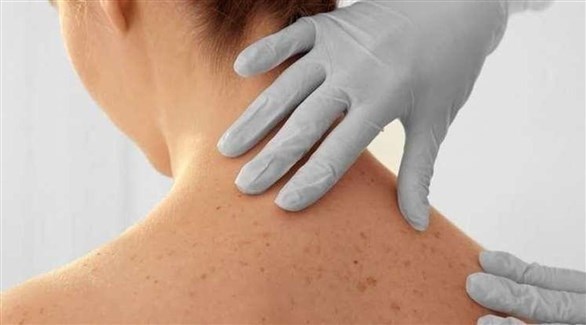 The German Cancer Society said that the cause of light skin cancer is ultraviolet rays from the sun, which damage the genetic properties of skin cells.

Although the body can withstand this damage to some extent, exposure to intense and prolonged sunlight disrupts the body’s immune system, resulting in the formation of cancer cells.

The association added that basal cell carcinoma is the most common form of mild skin cancer, explaining that it often appears later in life, after age 50.

It is a slow-growing tumor that often appears on the bald area of ​​men, as well as on the most sun-exposed areas of the face, forehead, cheeks, nose, and ears.

In its first stage, the infection appears as a light red spot that may be raised or flat, and over time it sloughs off and may bleed.

Although it does not usually progress to the stage of metastasis, during which cancer cells move from the main affected organ to other parts of the body, it can cause destruction of surrounding tissues.

Squamous cell carcinoma is the least common type of light skin cancer and usually affects areas exposed to sunlight, but can appear on all parts of the body.

The earlier the condition is diagnosed, the better the chances of treatment for clear skin cancer in all its forms.

In most cases, surgical intervention is enough to permanently eradicate it. There is also a technique of radiotherapy or cryotherapy and photodynamic therapy, to treat the skin using a type of creams and gels that contain active substances, before projecting beams of light on the injured places.

To avoid skin cancer, you should protect yourself from the sun with sun creams and clothing that covers the skin, and avoid sunlight, especially at midday. In general, keep checking for skin cancer as you age.