Suffering from hiccups for 4 months due to a brain tumor 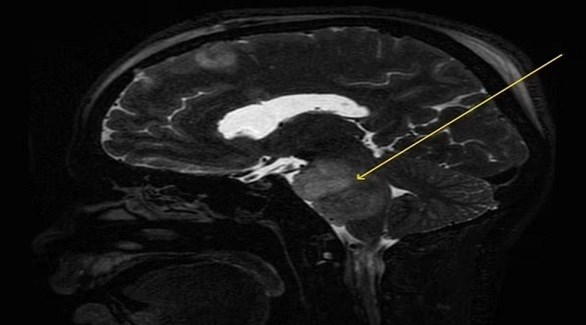 Doctors believe a four-month hiccup in an Indian man may have been caused by a brain tumor.

The unidentified man, in his early 30s, sought medical treatment for a headache that had been giving him pain for more than two weeks and was complaining of vomiting three times a day, according to a case report of his illness.

The man’s health began to deteriorate four months ago, when he began to hiccup frequently, until the hiccups eventually became persistent, affecting his sleeping and eating patterns, and brain scans were performed to get to the core of his mysterious illness.

The results revealed that the man had a diffuse pontine glioma, a type of brain tumor that is very aggressive and difficult to treat, and the man’s hiccups began to stop after starting cancer treatment. Experts hypothesized that the tumor affected the part of the brainstem responsible for controlling the nerves and muscles that normally trigger the hiccup response.

The man said he had asked doctors for help with his hiccups before, but to no avail. After a series of blood tests and a physical exam, doctors decided to have the man undergo a CT scan and found a lesion on his brain earlier. he underwent a more detailed MRI.

An MRI revealed a mass of tissue indicating the presence of a pontine glioma, a type of brain tumor that grows in the brainstem, the part that connects the organ to the spinal column, as well as internal bleeding within the brain itself.

It is impossible to surgically remove pontine gliomas because of how attached they are to the actual brainstem. The man was sent for an operation, in which surgeons cut into his brain to relieve pressure inside his skull, which was caused by a buildup of fluid in the brain. brain. Eight days after recovery, the man underwent a six-week course of radiotherapy in an attempt to remove the tumor.

“The patient’s hiccups started to disappear after starting radiotherapy and after one month of radiotherapy, the hiccups had subsided significantly,” said Dr. Nagasupramaniam Vimbali, from the All India Institute of Medical Sciences.

Dr. Vimbali added that the case demonstrated the importance of doctors identifying the causes of persistent hiccups in a timely manner to ensure that the patient does not experience further complications, according to the British Daily Mail.