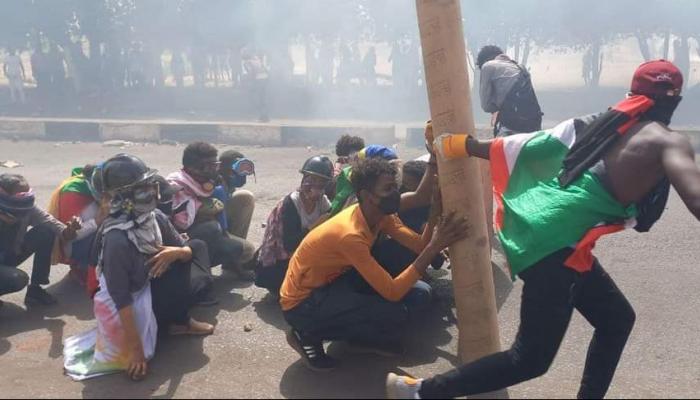 According to witnesses who spoke to “Al-Ain News”, thousands of protesters arrived at the Sharoni station, coming from different areas in the south and east of Khartoum, and were on their way to the presidential palace, before the security barriers installed by the police. confronted them.

In the city of Omdurman, protesters tried to cross the White Nile Bridge towards the Republican Palace, but were unable to get around security pillars and the widespread deployment of army and police forces, according to witnesses.

Similar protests also took place in the city of Bahri, north of the capital Khartoum, and in the cities of Wad Madani, Gezira state, Port Sudan, Gedaref and Sennar, all calling for civilian rule.

Demonstrators in Khartoum launched slogans against the military, denouncing the deteriorating economic conditions in the country, which is witnessing a continuous increase in the prices of raw materials, and the devaluation of the national currency, “the pound”, against cash. gratuitous.

Today’s demonstrations followed a call by the resistance committees that are leading the ongoing protest movement in the country since the decisions of the head of the Sudanese army, Lieutenant General Abdel Fattah Al-Burhan, issued on October 25, which decided to dissolve the government, impose a state of emergency in the country, and freeze some provisions of the constitutional document.

Khartoum lived last Tuesday and Wednesday, as if at the mercy of the barricades that made the movement almost non-existent, after the demonstrators closed vital routes within the movement that demanded a civil government.

The recent protest movement left dozens dead, according to the Central Committee of Sudanese Doctors (a union entity), while there is no official balance on the size of the victims.

A US Treasury statement said “the placement of the Reserve Police on the sanctions list came after they committed serious human rights violations.”

“The Reserve Police used excessive force against pro-democracy protesters who had peacefully demonstrated against the military overthrow of the civilian-led transitional government in Sudan,” the US State Department said.

The Central Reserve Forces are a fighting faction administratively affiliated with the Sudanese Police, established by the former regime and used to deal with the recent protest movement in Sudan.