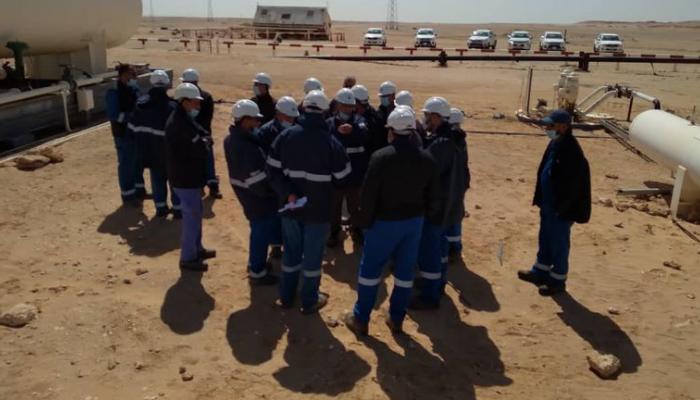 A new crisis faces Libyan oil, especially in light of the marginalization of its workers in the east of the country.

The National Petroleum Corporation, Benghazi, denounced the deliberate marginalization and prevention of payment of wages and delays for a period of more than four months, without considering the serious consequences thereof.

The foundation said in a statement that Al-Ain News reviewed a copy of it, that the gross injustice suffered by employees is exacerbated by the approach of the blessed month of Ramadan, and the previous government ignored its disbursement.

And he demanded that it be disbursed quickly in response to international calls in the Security Council not to politicize the oil sector in the fair distribution of its income.

He also demanded the regularization of the administrative conditions of the employees and the signing of their candidacy for the companies to which they were assigned urgently, guaranteeing all their rights, including labor categories.

The Corporation called on the Speaker of Parliament, Aguila Saleh, Prime Minister Fathi Bashagha, the Ministry of Petroleum and the Chairman of the Board of Directors of the National Petroleum Corporation to respond quickly, calling for a follow-up to these vital and important demands. .

The institution warned of escalatory steps whose scope cannot be predicted in the event that the legitimate demands of employees are not met and the seriousness of the injustice inflicted on these employees in the face of deteriorating economic conditions and worsening living conditions. .

Last September, the Libyan National Petroleum Corporation announced the appointment and inclusion of all subsidiaries of the parallel corporation and the end of the division forever.

At the time, the Corporation explained that a resolution was issued for the merger and appointment of its counterpart, which was based in the eastern region, in the National Oil Corporation and its subsidiaries, according to the needs of the sector due to the functional specializations of the interested.

Since last December, Libya has been exempt from the restrictions of the oil exporting group “OPEC +” to participate in the cuts it approved, to reduce production due to internal conditions.