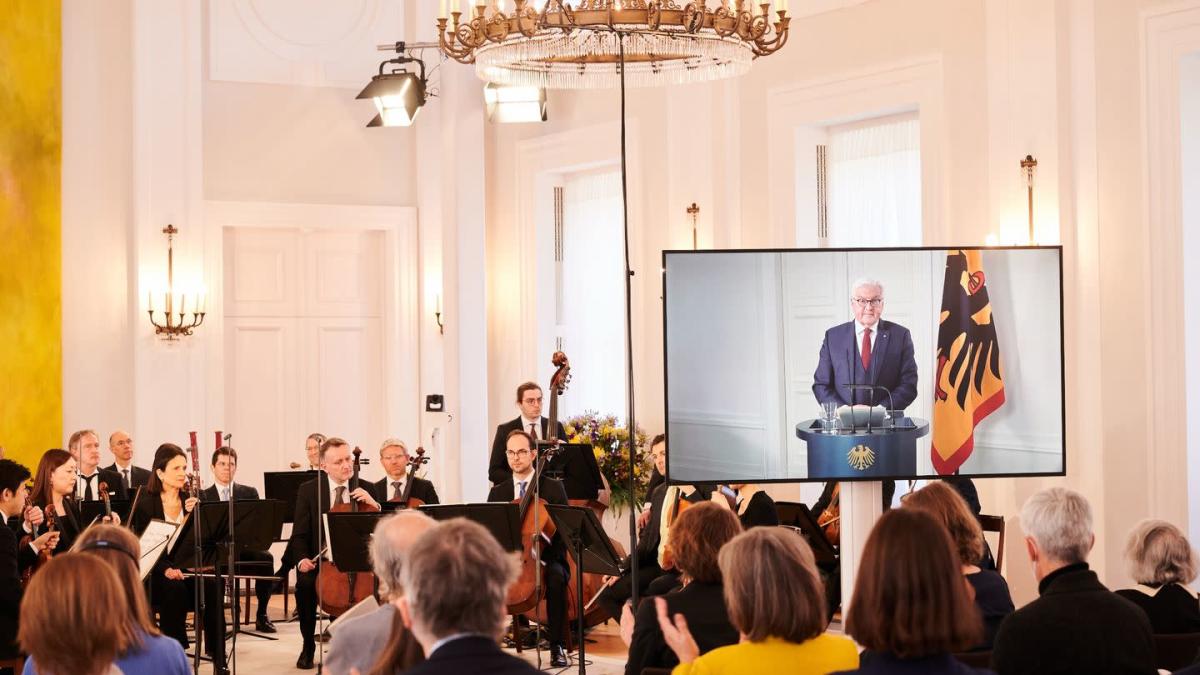 The federal president expects even more drastic consequences of the Ukraine war in Germany. The Berlin Philharmonic offers a charity concert at Bellevue Palace. A guest stays away.

Berlin – Federal President Frank-Walter Steinmeier has prepared people in Germany for hard times and losses as a result of Russia’s war of aggression in Ukraine.

“We also face more difficult days in Germany,” he said in a video message Sunday for a Berlin Philharmonic concert for freedom and peace at Bellevue Palace. The severe sanctions imposed would inevitably bring them. “We will have to be ready to use them if our solidarity is not going to be just lip service, if it is going to be taken seriously.”

“And the whole truth is that there are still many difficulties ahead,” Steinmeier said. Despite all ongoing diplomatic efforts to end the war, the following applies: “Our solidarity and support, our steadfastness and our willingness to impose restrictions will be required for a long time.”

Little cast in the great hall

The renowned orchestra, with musicians also from Ukraine, Russia and Belarus, performed works by Ukrainian, Russian and Polish composers in a small formation in the Great Hall of the official residence of the Federal President. However, the Ukrainian ambassador Andriy Melnyk was outraged that only Russian soloists performed, including pianist Yevgeny Kissin. “An affront. Sorry I’m walking away,” he wrote on Twitter.

The Federal President’s spokeswoman, Cerstin Gammelin, lamented on Twitter. The concert offers the possibility of a common signal for Ukraine. “It’s a shame we can’t send this signal together.” Gammelin noted that the focus of the program was the important Ukrainian composer Valentin Silvestrov, who had just fled his homeland at the ripe old age of 84. After the official concert, Silvestrov performed a current composition on the grand piano, in which he processed the impressions of the fugue from him.

Melnyk tweeted about spokeswoman Gammelin’s statement: “My God, why is it so hard for the Federal President to realize that while Russian bombs are falling on cities and thousands of civilians are being killed day and night, we Ukrainians are not in the mood of “great Russian culture” has enough.

The Russian chief conductor of the Berlin Philharmonic, Kirill Petrenko, had to cancel at short notice due to illness. Nodoka Okisawai conducted the orchestra for him. The Federal President and his wife Elke Büdenbender were also only able to watch the concert on television due to heart disease. Therefore, Steinmeier spoke to the guests in a video message.

“These are terrible days and weeks. We are all shocked, horrified by what is happening in Ukraine,” she said. Steinmeier recalled that in his speech after his election in mid-February he warned Russian President Vladimir Putin not to underestimate the strength of democracy. “Today we know: he underestimated her.” Steinmeier thanked all citizens for their solidarity with Ukrainians fleeing their country.

“There is war in Europe”

The Federal President showed understanding for the fears felt by many people. “The older ones have deep and terrifying memories, while the younger ones have a scare they never thought possible: there is war in Europe.” No one can simply remove these fears. “But we can counter fear with something: our defense and our humanity, our desire for peace and belief in freedom and democracy, which we will never give up, which we will always defend.”

VIDEO: Steinmeier and his wife infected with coronavirus