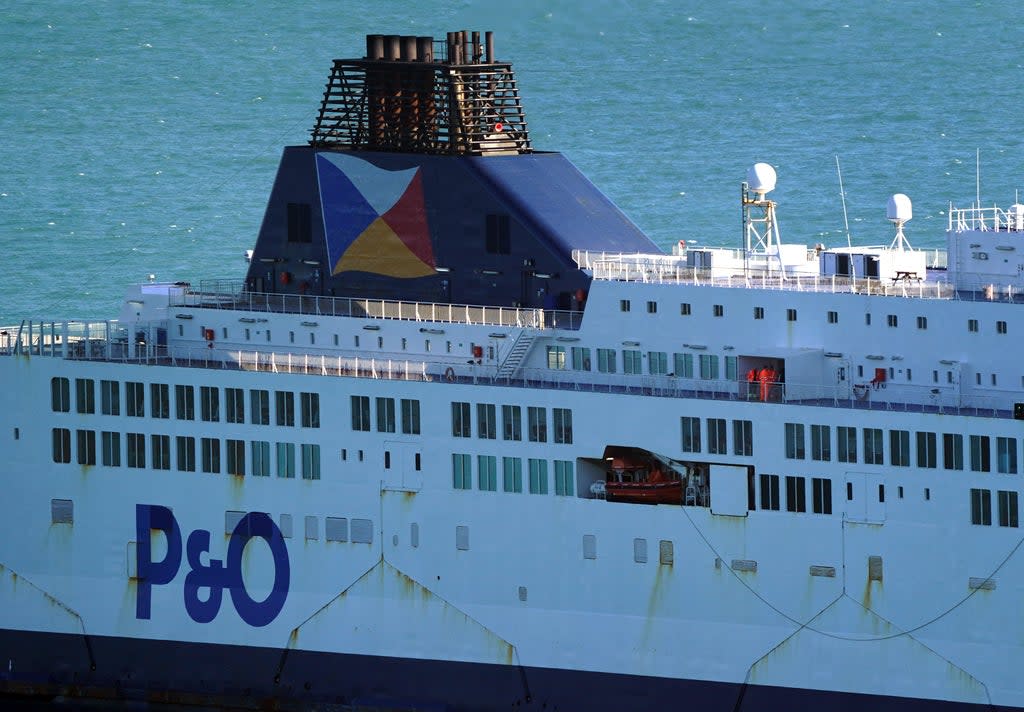 New crew on P&O ships will be paid well below minimum wage, a union has said amid continued anger over the ferry giant’s firing of 800 workers.

The Rail, Maritime and Transport (RMT) union said it had uncovered another “shocking twist” to the scandal because replacement crews on P&O ships will have “poverty pay”.

More demonstrations are set to take place in the coming days, with mounting pressure on the company to reverse its decision and the government to take action.

The RMT said P&O ships on the Liverpool-Dublin route have now been manned with Filipino qualifications on contracts paying below minimum wage.

We fear that poverty wages will be accompanied by seafarers chained to 12-hour shifts, seven-day-a-week contracts that operate continuously for six months, with no pension.

Shipping companies that are registered in other countries and operate routes from UK ports to Europe can pay below the minimum wage because they are exempt from the legislation.

RMT General Secretary Mick Lynch said: “The weakness of UK labor law has not only enabled the mass redundancies of UK seafarers, it has also incentivized this barbaric behavior because employers know there may not be an effective sanction to prevent them from doing so, and also that they can get away with paying less than the minimum wage.

“P&O may pay agency staff more than minimum wage at first, but eventually they will drop to lower rates simply because there is nothing to stop them from doing so.

“We fear that poverty wages will be accompanied by sailors chained to 12-hour shifts, seven-day-a-week contracts operating continuously for six months, with no pension.”

The union has called for a boycott of P&O services and is urging the government to seek legal options to reinstate sacked workers.

Lynch added: “We need new labor legislation to protect UK seafarers. The reason P&O has not been able to fire Dutch and French contract seafarers is because they have much stricter national labor laws.”

A demonstration will take place outside Parliament on Monday and at the P&O ferry terminal in Cairnryan, southern Scotland, on Wednesday.

Ahead of the Parliament protest, a rally will also take place outside the London offices of P&O owners DP World.

TUC General Secretary Frances O’Grady said: “There was no attempt to challenge P&O for these unconscionable tactics or even question whether these actions were legal.

“Ministers, from the Prime Minister on down, have serious questions to answer.

“This is a national scandal. It has to be a catalyst for change in workers’ rights.

“It is time for the Government to urgently introduce an Employment Bill to prevent workers from being treated as disposable labor and to ensure that what happened at P&O never happens again.

“P&O has acted terribly. The company must immediately reinstate all dismissed staff without loss of salary.”

A P&O Ferries spokesperson said: “We know that for our staff this dismissal came without notice or consultation, and we fully understand that this has caused distress for them and their families.

“We made this difficult decision as a last resort and only after full consideration of all other options, but ultimately concluded that the business would not survive without fundamental changes to crew arrangements, which in turn time would inevitably result in layoffs.

“We also believe, in good faith, that reaching an agreement on the way forward would be impossible and, in this context, that the process itself would be highly disruptive, not only for business but also for trade and tourism in the Kingdom. United.

“We have offered enhanced compensation terms to those affected to adequately and quickly compensate them for the lack of warning and consultation.

“The changes we have made bring us in line with standard industry practice.

“All affected crewmembers who were working (at the time) were notified face-to-face and in person on board their vessels.

“For the crew that was away, P&O Ferries went to great lengths to notify them personally – they were called individually by phone, as well as email and text.

“Virtual meetings were also held, but only 261 of our 800 affected employees were on those calls.

“To try to minimize disruption for our customers, we reached out to everyone we could reach.

“If any passenger has any questions about traveling with us, we encourage them to contact our customer service team.

“The teams that escorted the seafarers off our ships were totally professional in handling this difficult task with all the right sensitivity.

“Contrary to rumours, none of our men wore ski masks or were instructed to use handcuffs or force.”