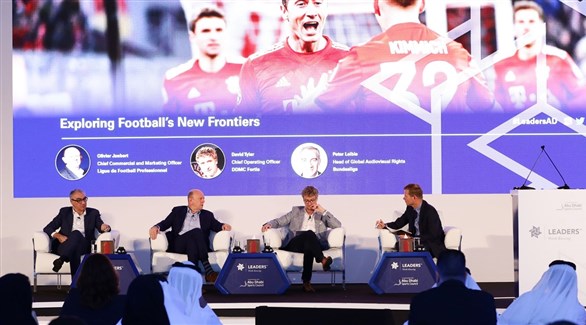 The World Summit of Sports Leaders, organized by the Abu Dhabi Sports Council, will start tomorrow Wednesday at the Marina Pass Circuit Convention Center, for two days, during which 12 sessions will be held, 6 sessions each day.

The summit, in its fourth edition, with the participation of 400 world sports leaders, will discuss the latest developments in the world sports industry through four main axes: leadership, technology, creativity and experience.

Hosting the summit aims to learn about the challenges and opportunities, and for sports leaders to come together in one place, benefit from the experiences and transform ideas, opinions and initiatives into a tangible reality, as well as exchange views. and views on mechanisms. of sport development and where the opportunities lie.

The summit is part of the plans of the Abu Dhabi Sports Council and its tireless effort to consolidate Abu Dhabi’s position as a reference destination for international sporting events, since it aims to discuss all the news in the sports sector and is an important opportunity to exchange knowledge and experiences worldwide.

The program of the first day of the summit begins with the opening of registrations and the issuance of participation and attendance permits, and then the work of the summit begins with the inaugural session entitled “A look at the world of sport at the end of 2021 and early 2022. How did the sport flourish in Abu Dhabi and the Middle East?” During which Aref Hamad Al-Awani, Secretary General of the Abu Dhabi Sports Council, Jimmy Worl, Founder and President of Leaders, speaks, followed by the second session on “Football Marketing in the New Era”, in which Adrian Philby will speak , Commercial Director of Celtic Football Club, Naveen Singh, Commercial Director of the FA, and Khalid. Badr, Director of Operations of the Egypt Pyramids Club, and the topics of the The session deals with opening new sources of income, building a sustainable business model for women’s football and the partnerships to be signed.

The work of the third session, entitled “How does the NBA deal with international markets? Atlanta Hawks director of basketball Melissa Proctor, will speak on the topics: Teams from the USA together, while the fourth session entitled “How to mix event hosting with reality and digital”, in which Alex Robertson, Marketing Director of Etihad Airways and John Lekrich, CEO of Flash Entertainment will talk about the axes of post-event preparation models and pandemic facilities, and personal online experiences To engage and inspire, the future of sports and leisure hospitality.

The fifth session of the first day includes a panel discussion entitled “Developing football in the world”, during which James Johnson, CEO of the Australian Football Association, Laura Georges, Secretary General of the French Football Association, and Robbie Fowler, former footballer. the star of the England national team and Liverpool FC, will speak English with centers: organizing the game in different areas, from participation to professionalism, maintaining tradition while remaining at the forefront.

The work of the first day concludes with the sixth session under the title “Unleashing Women’s Sport”, during which: Kinda Ibrahim, Director of Global Content for Partners in the Middle East and Turkey (Twitter), and Benny Bonsu, Director of Daily Content . (Olympic Channel), will speak on the axes: Strategies to build media channels for women athletes – Educate the masses about women’s sport – Create alliances and increase interaction.
The program of the second day of the World Sport Leaders Summit includes various sessions and panel discussions, starting with the first session under the title “Studying the different forms of cricket”, during which: Sir Alistair Cook, English cricketer and Essex County Cricket Club , Tom Banton, English cricketer and Somerset cricket team Session topics include: Protecting the game of cricket in a changing world – the pros, cons and variables – how players adapt, coaches and fans, and then follows the second session under the title “The Future of Investing in Golf” Session topics include the round of golf and its huge funding – coexistence with a packed tournament schedule – Refining the product for amateurs , players and partners.

Alexandra Armas, executive director of the Women’s European Tour, Phil Cotton, from Elevate Sports Company, and Khalid Mubarak Al Shamsi, general secretary of the Emirates Golf Federation, will intervene while the work of the third session under the title “The history of the partnership between the NBA and the Department of Culture and Tourism – Abu Dhabi”. Featuring Ralph Rivera, General Manager of the NBA in Europe and the Middle East, and Fatima Al Balushi, Acting Director of Event Management at the Department of Culture and Tourism – Abu Dhabi, session topics include building unique business models in global markets, local partnerships and their importance, creating and developing fans around the world.

The work of the summit continues with the fourth session entitled “The Importance of International Sports Federations”, during which: Joanna Coates, experienced CEO and activist in the field of women’s sport, Jordi Bertomeu, Executive Director of the European League, and Marisol Casado, President of the International Triathlon Federation. : Balancing the elite and the different segments of society – Listening to the wishes of the fans – The importance of the Olympic Games, now and in the future.

The fifth session will feature a panel discussion on “Engagement and Empowerment: Global Perspectives on Building Strong Bonds with Fans”, during which: George Ivazoglo, NBA, Saif Rashid Al Nuaimi, CEO of Abu Dhabi Motorsports Management Company, and Benny Bonsu, director of daily content at the Olympic Channel, discusses: How do you turn ordinary fans into dedicated fans? – Work with partners to strengthen relationships with fans – Compete for attention as global markets become saturated.

The work of the summit will reach the sixth and final session on Thursday, which will be held under the title “Bridging the gap between elite players and community sports practices”, during which Dr. Omniyat Al- Hajri, Board Member of the Fatima Bint Mubarak Women’s Sports Academy, Laura Gorges, a former French national team player, and Joanna Coates, an experienced CEO and activist in the field of women’s sports, will speak. The session deals with the topics: Building a framework for participation – The role of major sports organizations in building a healthy lifestyle – Motivation and real work.

The summit will also see the holding of many interactive workshops on the main themes and outcomes of the sessions. In addition, the conference program includes the announcement of a number of sporting events that will take place during the current year.

For his part, the Secretary General of the Abu Dhabi Sports Council, Aref Hamad Al-Awani, said: “We welcome everyone here in Abu Dhabi, the world’s foremost sporting destination, specifically at one of the world’s premier racing circuits. world’s leading engine. of the world, wishing everyone a pleasant stay in the beloved capital, which continues with its advanced presence in the organization of major events and creating a new era in the world of sport, and there is no doubt that the summit will contribute to providing important experiences and outlets in the course of global sports developments, in a way that serves UAE sport and strengthens its association with prestigious international institutions.”

He added: “The Abu Dhabi Sports Council, headed by Sheikh Nahyan bin Zayed Al Nahyan, is constantly looking for ways to develop, and it is from this point of view that the organization of the Summit of World Sports Leaders emerged, which represents an opportunity for the participants Learn about the experiences of the speakers, including global partnerships concluded between various parties. Updates on the global sports scene.