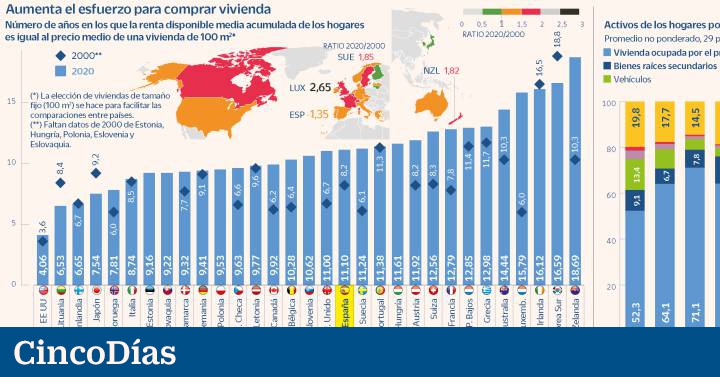 House prices and the net income of families have developed at different speeds in recent decades. As a result, the total income that a household has to spend on financing a house has increased rapidly. Whereas in 2000 a nuclear family had to save the full income of 8.8 years in order to be able to buy an average house with 100 square meters, two decades later it is already 10.9 years for the same type of property.

The calculations, released last week by the Organization for Economic Co-operation and Development (OECD), refer to the average of the 31 main economies that make up the club, including Spain. However, the country has increased the effort somewhat above average.

Today families in the OECD have to devote 2.1 years more income to owning property, an advance of 23%. In Spain, the increase is 2.9 years, from 8.2 to 11.1 years. It’s a 35% increase, which incidentally is more noticeable among lower-income households, who support a greater effort.

in the report Taxes on housing in OECD countries, published last week, the organization is preparing a diagnostic around real estate. Based on this, he proposes a series of fiscal measures to balance the market, correct inequalities and increase public revenues.

The committee, chaired by Mathias Cormann, is currently concerned about the growing economic gap between homeowners and those who cannot afford the leap, caused by rising prices. On the one hand, real estate revaluation “offers a great opportunity for wealth accumulation as owners benefit from significant investment returns through domestic wealth”. Tenure also promotes access to credit by serving as collateral. All of these benefits “will disproportionately accrue to older, higher-income households, who are more likely to be homeowners,” warns the OECD.

On the other hand, those unable to purchase a home will tend to rent and “find it increasingly difficult to climb the real estate ladder and reap the economic benefits of ownership,” the agency states.

The OECD analyzes the weight of housing as a component of household wealth. It’s a vehicle he sees as the “key” to wealth accumulation and social advancement. When the different income groups are broken down, the resulting effects of ownership can be observed.

According to data from the OECD, the main home, which is always owned, is becoming the largest source of wealth in households in the lowest income quintiles. It represents from 52% of total wealth in the poorest group to 71% in the third quintile. However, in these cases, home ownership cannot be a vehicle for attracting wealth from other sources due to its market value or the burdens and debts that often come with it.

In contrast, in the wealthiest quintile, the usual house accounts for less than 40% of total wealth. In the latter group, on the other hand, other secondary real estate values ​​are gaining in importance (22%), such as second homes or rental homes, or financial assets and capital investments (34% of assets). These, on the other hand, are downright meaningful in the lowest income brackets, where, for example, vehicles play a dominant role in relation to total wealth.

Living in the hands of the rich

OECD data also show that the home ownership rate at the top of the income distribution is highest in almost every country in the club. The figures show that in 29 countries, almost half (46%) of all gross owner-occupied housing is owned by households in the top wealth quintile. Families in the second, third, and fourth quintiles together own 51% of gross household wealth, while families in the lowest quintile own about 3%.

Secondary real estate is even more concentrated at the top: Around 75% of wealth is held by households in the top income quintile. In contrast, the middle part of the distribution owns only 24%, while the remaining 1% is held by the poorest households.

- Advertisement -
Share
Facebook
Twitter
Pinterest
WhatsApp
Previous articleInterview with the Vampire: Louis, Lestat and Claudia hit the streets of New Orleans again in the latest trailer for the AMC series
Next articleDuplantis, world gold in pole vault with a new record at the championships