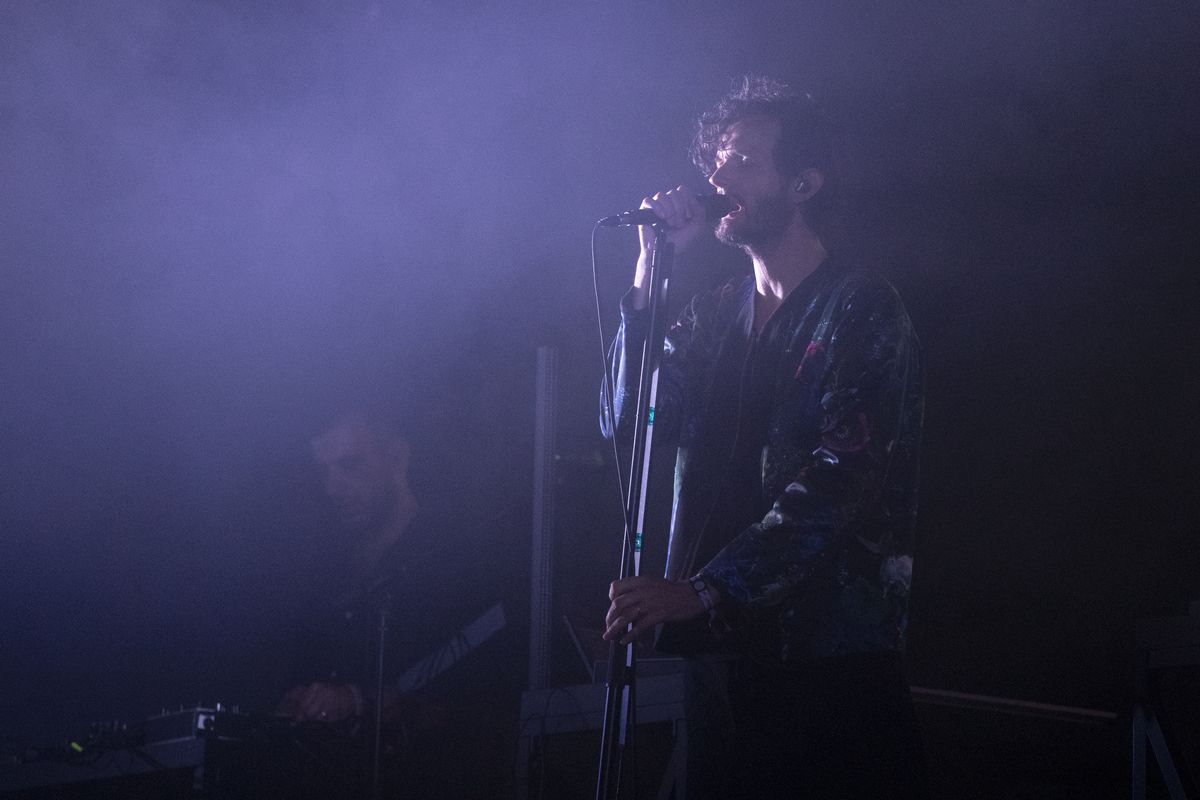 It will be as advanced as you want, it will teach us to foresee the future cradled by coltan, and it will even make us believe that we will reach tomorrow, but as the public approaches Sónar, both day and night, what hey what it receives is the percussive rumble, the bass that takes us back to a ritualistic, celebratory and tribal past. The technology festival almost sounds like a smooth patch of animal skin. Therefore, almost as a logical consequence, on Friday popular music, the usual styles, the music that culturally articulates us as a society, was the axis of a program celebrated by an audience that filled day and night, also mostly local public, under which foreigners were a simple color note. The concerts by C. Tangana, El Niño de Elche, Samantha Hudson, Nathy Peluso and, already with the compass in other latitudes, those by Kamo Mphela or Young Sing & Suchi created a day on which everything sounded familiar. If forgetting the past dooms losing the future, Friday’s Sónar was installed in that future that embraced the crowd with something as immersive as exuberance.

Lo de C. Tangana is one of the best musical scripts written and accepted by the public for Spanish language music in recent years. An almost overwhelming crowd in the Fira’s main hangar in Hospitalet to continue his concert which ended with an overwhelming success, sounding terrible on the sides. It was no better than Sant Jordi, as happened in Primavera with Dua Lipa, festivals have a different context, some restrictions and the exuberance of an audience verbally telling those around them how much they are enjoying it. In the case of Tangana, one of its most outstanding aspects remained: an agile and dynamic video production that built a film full of close-ups on the Olympic mountain that made it more suggestive to follow the concert through the screens. At the Fira there was performance but resources were not exhausted with so many results, lacking the continuity of a full show already accomplished. In an hour, Tangana returned to defend the parents’ and grandparents’ music, the Latin root as an element of pride and joy, built with non-alien keys. That translated into the hangar full of arms flexing dancing rumbas, hips swaying in the son’s heat, olés when flamenco hit, and village dance scenes at parties. The foreigners, lost between the palm trees, silenced by choruses they didn’t know, attended a show they didn’t have the keys to at a festival that took them out of their comfort zone and made them feel like they’ve travelled, this time to be. At the end of the night, Moderat’s elegance brought her back to the sonar of her life with a flawless light show in her sobriety.

But before that, the same thing happened as with Tangana with Nathy Peluso continuing to accompany him atheist during his concert. If in his time Massiel was so described The armor of Leganitos, this Argentine based in Madrid is a fully armored division. As festival fashion dictates for both genders, she dressed in sheer black lace to reveal areas that trembled twerk or the same ones that he wanted to draw attention to when, with his back to the staff and with pompous buttocks, he placed a red rose in the center to make the women present hoarse, the main machines of his performance. With a band that spanned two metals, with the traditional sound reigning over the digital and with her above the crowd walking confidently on an elevated catwalk, Nathy Peluso shattered, a dominating physique, a ragged voice, energy galore Fill every resistance. Yes, his thing is urban music, but the Latin accent, including bachata, is key to understanding his show. More popular music that the mothers and grandmothers of those who were there, between smiles and sweaty bodies, would understand unconditionally.

More sweaty bodies, more smiles and more capitulations took place in the afternoon with Músika Festera’s show, orchestrated by another Sónar sponsor, El Niño de Elche. Subtext: Party music and fun are also political, as Joan Garriga (formerly of Troba Kung-Fú and now Mariachi Galactico) insists. The fun is uncontrollable, as Franco knew when he banned the carnival, the party knows how to start, not when or how to end. For this reason, it was brilliant to bring together a Valencian band, invading the middle of the public like a sea that opens by divine order, and an electronic musician Ylia to shoot fundamentals firmer than an uncooked chickpea. To conclude the idea, the Niño de Elche himself as the high priest of this ritual in which he uses word, gesture and quejío More misplaced foreigners (Music of the Moors and Christians? Bakalao?) amidst local audiences who played relatives’ keys. In the direct debit, some technical problems that cut the sound abruptly, curiously when El Niño sang “Let’s break the machine” like a Luddite mantra, and also that the proposal did not hybridize the languages, but superimposed them. Still a brilliant concept. Paquito the chocolatier at sonar.

And cabaret with Samantha Hudson, perky boobs reminiscent of Aphrodite from Mazinger Z, all she had to do was yell boobs out, dance bar Bada Bing in The sopranos, pelucón, dancer, belt and a sharp tongue with humor. Intelligent electronic cabaret show when there are fools, with the fears, oppressions and torments of a Spain still wearing shades of cassock. Samantha Hudson is an intelligent woman, not because she’s well-read, but because she has common sense and naturalness, like the village grandmothers, who certainly thought, without saying it of course, “It’s too much pussy for you.” , my love,” as Samantha sang. A more festive conclusion with Kamo Mphela, contemporary South Africa is not Paul Simon’s although the dances are similar, or Yung Sing & Suchi’s Bollywood in a hot village. Sónar was a popular area on Friday.

- Advertisement -
Share
Facebook
Twitter
Pinterest
WhatsApp
Previous articleIberdrola is taking action against the fine of 435 million at the Mexican supervisory authority
Next articleBaldoví says he ‘puts his hand in the fire’ for Oltra, asks for ‘consideration’ and warns Puig: ‘No unilateral decision’