Some 125,000 people have been evacuated through humanitarian corridors in Ukraine 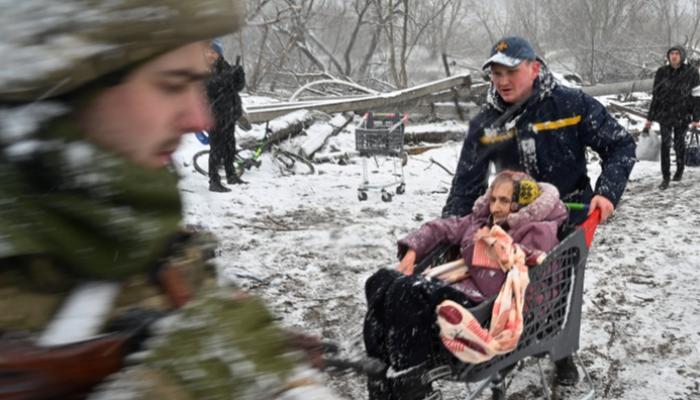 Ukrainian President Volodymyr Zelensky said on Sunday that some 125,000 people have been evacuated through humanitarian corridors from conflict zones in Ukraine.

“Today’s main mission is Mariupol,” he added in a video address, noting that a humanitarian supply convoy is now just 80 kilometers from the besieged coastal city, where more than 400,000 people are staying.

Separately, a Ukrainian security official in the eastern Luhansk region accused the Russian army of bombing his town with phosphorus bombs on Saturday night.

According to Oleksiy Beluchitsky, the police chief of Popasna, about 100 kilometers west of Lugansk, the Russians used phosphorous bombs in his area.

“This is what the Nazis called ‘burning onions,’ and this is how they (Rochians) (a combination of Russian and fascist words) call our cities. Unspeakable suffering and fires,” Beluchitsky said on Facebook.

It was not possible to immediately verify this information.

Also in Donbass, a train in Kramatorsk carrying displaced people to Lviv was hit on Saturday night, according to the commander of the Donetsk Military District, Pavlo Kirilenko, who confirmed that the bombing left one dead and one wounded.

The fighting also affected two Orthodox churches in Svyatogorsk and Severodonetsk in Donbass, where civilians were sheltering, according to regional authorities, who did not reveal the result of the damage.

These areas are located in parts of the Luhansk and Donetsk regions that were not part of the two pro-Russian breakaway “republics” until the beginning of the Russian invasion of Ukraine on February 24.

On the ground, the Czech Defense Minister indicated his country’s intention to provide additional military aid to Ukraine worth $31.5 million.