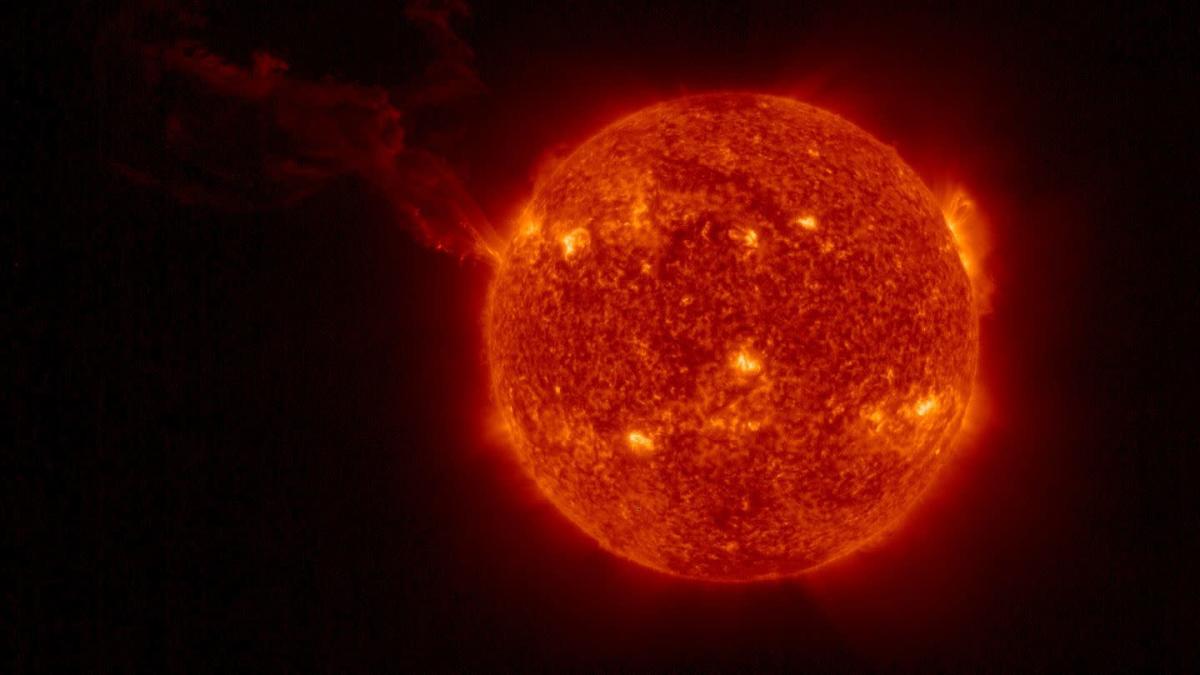 Darmstadt/New York (dpa) – Solar storms can create fascinating light effects in the sky like polar lights, but they can also trigger a state of emergency.

For the earth as a planet, they are not a danger, but they are for people in an increasingly technological world. During a solar storm, high-energy particles and a massive cloud of plasma hurtle toward the planets from the center of the solar system and can greatly disrupt infrastructure on and around Earth. The American aerospace company SpaceX, which lost around 40 of its satellites as a result of a solar storm, had to suffer the painful consequences of the so-called space weather.

What are solar storms?

Solar storms occur when the star erupts. According to the European space agency Esa, high-energy particles and plasma with a dimension of billions of tons are launched into space, which can move quickly towards Earth, 150 million kilometers away. In reality, the earth is protected by its magnetic field and atmosphere, but such storms can cause massive damage. Satellites can be destroyed, electrical networks or communication and navigation systems can collapse.

“A very extreme solar storm is possible at any time and could have far-reaching consequences,” says Melanie Heil, space weather mission coordinator at ESA headquarters in Darmstadt. From the location of the satellite control center, European astronauts control their observations of solar storms. It is not “very likely” that all satellites will be damaged, but some could be affected.

How can we protect our satellites?

To protect power grids on earth, you need advance warning. If you could down-regulate the capacities on generators and transformers, this might be enough to protect them from damage. However, an event of the century is very difficult to predict. “The latest calculations say we can expect an extreme space weather event in the next ten years with a probability of around 10 percent.”

The warning time is short because solar particles move extremely fast through the vastness of the solar system. “If we couldn’t observe something like this, we would always be vulnerable,” says Heil. There are already certain observation points that provide data. However, for more reliable forecasts, the capacity is still expanding.

With the “Vigil” probe, Esa hopes to get a much better view of solar storms. “The Vigil mission, due to its location in space, will be able to clearly observe potentially dangerous solar activity”, recently explained the head of this ESA mission, Giuseppe Mandorlo. According to Heil, the mission should start in 2027 and, unlike previous observing options, it can look at the sun from the side and follow storms.

Esa was shocked by the extent of the damage to billionaire Elon Musk’s private space company. “It wasn’t actually a particularly strong solar storm, so no official warning was sent,” says Heil. SpaceX satellites were in the wrong place at the wrong time. Due to the storm, the atmosphere had become so dense that the orbiters at an altitude of 200 kilometers could not reach their target point, which was actually 300 kilometers higher, under their own power and will now burn up.

With the Starlink system, SpaceX wants to establish fast Internet connections directly through its own satellites. SpaceX is doing a “good job” with Starlink, according to the US space agency Nasa. Both NASA and the US weather agency NOAA are currently working with SpaceX to further improve Starlink operations. NASA is also working to better understand weather events in space.

According to NASA, the sun is a ball of gas that “lives and breathes” and is constantly active. And like many natural processes on Earth, the Sun’s activity is cyclical. Activity on the solar surface, such as solar flares or coronal mass ejections, can significantly increase the total energy of the solar wind, as well as its speed. The frequency of geomagnetic storms waxes and wanes with the solar cycle. Geomagnetic storms occur most frequently during solar maximum. According to Heil, the sun has significantly more sunspots at the maximum and these are possibly the source of solar storms. A cycle lasts eleven years.