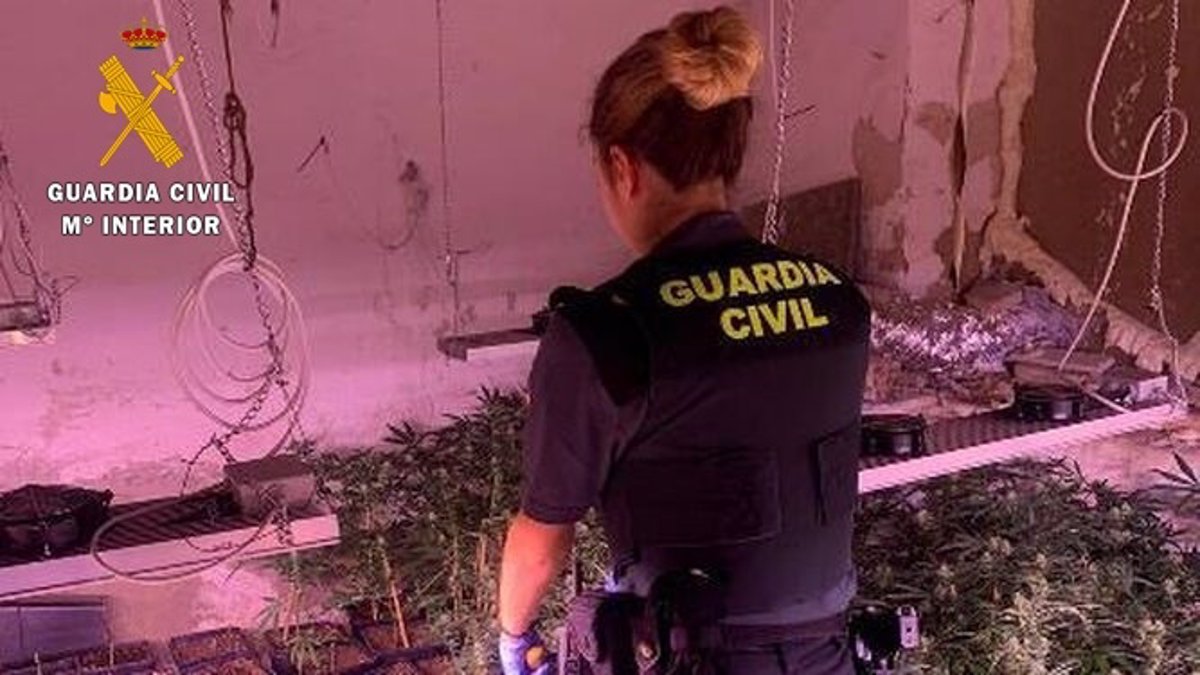 Staff from Almería’s Civil Guard Headquarters are conducting four separate operations in different parts of the province, which have led, among other things, to the arrest of a total of six people and the seizure of 2,816 marijuana plants.

These actions are part of the work that the Almería Civil Guard is developing in the fight against drug trafficking, cultivation and/or production in the province. Action is also taken against illegal connections to the electricity grid, which poses a real risk of fire due to the high energy consumption, the armed agency said in a statement.

The first of the operations was carried out near 200 houses in the city of Roquetas de Mar, where Guardia Civil officers examined two houses in the same building where there were signs due to the characteristic smell of this type of grain and the continuous operation of electrical equipment for housing marijuana crops.

The second facility, called “Majarapa,” was located in the municipality of Alhabia in a farmhouse that emitted a strong smell of marijuana. According to a previous measurement of the power consumption, this was over 100 amperes, much more than the normal consumption of a household.

The agents arrested the person responsible for the harvest, who has numerous records for similar crimes for which Almeria’s No. 2 investigative court ordered his arrest.

On the other hand, as part of an operation carried out in Berja, the authors dedicated a chalet-style house, as well as an adjoining warehouse, to indoor marijuana cultivation, counting on three illegal power lines to maximize the yield cultivation.

The agents conducted numerous and discreet observations, which revealed that compressors were constantly working and the windows were secured from the inside so that the inside of the house, which is dedicated entirely to cannabis cultivation, could not be seen.

A house search was carried out, authorized by the Court of Instruction Number 2 of Berja (Almería), during which 1,078 large marijuana plants and crop protection products were seized.

In addition, 34 large room lamps with associated ballasts, 35 heat lamps, five fans, ten air conditioners, one of which was portable, electronic timers, extractor hoods and air filters were confiscated and three illegal power connections neutralized. electric. A man and a woman were arrested as responsible for the cultivation.

Finally, through the constant channels of information with the citizens, the Almería Civil Guard personnel learned of a highly productive marijuana crop hidden in the basement of a house in the town of Roquetas de Mar.

The agents launched an investigation, during which they confirmed that the basement, about 70 square meters, could accommodate a large indoor marijuana crop and thanks to the evidence obtained, the inspection of the house, after approval by Court No. 1 of Roquetas performed de Mar (Almeria).

In addition, seeds, ammunition and electrical and storage devices with information about the harvest were confiscated and an illegal connection to the power grid was neutralized.

For all these reasons, the three responsible for the plantation were arrested and brought before the investigative court no. 1 of Roquetas de Mar.

The total balance of actions carried out are six detainees, one person examined, 2,816 cannabis plants, 45 neutralized connections to the electricity network, 40 to the water network, a large number of electrical devices to maximize the harvest, 29,250 euros in cash, two shotguns and computer equipment.

- Advertisement -
Share
Facebook
Twitter
Pinterest
WhatsApp
Previous articleUnited, we can ask the Interior for more measures to avoid police stops for “ethnic profiling”.
Next articleMalnutrition problems among the most vulnerable children at the end of the school year