Situation of the “exaggerated” clinics: Association for more money 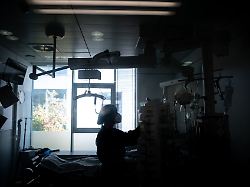 Lower Saxony and Bremen
Situation of the “exaggerated” clinics: Association for more money

Hanover (dpa / lni) – In view of the difficult economic situation in many clinics, the Lower Saxony Hospital Society (NKG) has demanded more money and sustainable structures. The already difficult situation of many hospitals “drastically worsened” in the corona pandemic, NKG Chairman Hans-Heinrich Aldag said at the general meeting on Monday. “The remuneration system is clearly reaching its limits and insufficient investment funding at the state level is exacerbating the situation.” The lack of specialists is also a challenge for the clinics, the bureaucratic burden is “barely manageable”.

The pandemic has made clear the high value of an efficient and available hospital structure at the national level, and also the weak points, Aldag said. In a position paper, the association emphasized that to ensure security of supply in Lower Saxony, supply must be maintained at a national level. Attractive working conditions for clinic employees are needed to counter the shortage of skilled workers: employees need to be relieved and new staff hired. In addition to proper pay, respect and trust are important.

The hospital company called on the country to significantly increase annual investments. The state has taken the first steps, but in view of an investment portfolio of around 2.2 billion euros for the planned construction measures, this is not enough. It is necessary to increase annual investments including lump-sum financing up to 520 million euros. The association also called for a state structural fund of one billion euros. In addition, the country must launch a special investment program for digitization in hospitals.

With a reform of the Lower Saxony hospital law, the state government wants to find a compromise between care close to home and high-quality treatment. This goes back to an investigative commission of the state parliament, according to which a new structure will be given to medical care with around 170 hospitals in the state. According to the Commission, some services should be concentrated and hospitals should be divided into three levels: basic, priority and maximum care.

Previous articlePre-production begins on ‘Dune: Part Two’
Next articleNew attendance record to prevent ‘ghost children’ from falling into the net