Shoukry: The formation of an Egyptian-Qatari committee to discuss strengthening relations between the two countries 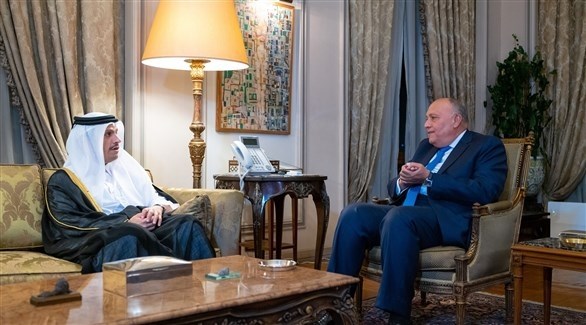 Egyptian Foreign Minister Sameh Shoukry announced the formation of a joint Egyptian-Qatari committee to discuss ways to strengthen relations between the two countries in all fields.

Minister Shoukry welcomed his Qatari counterpart, who is on a second visit to Cairo, noting that he also visited Doha as part of the return of relations between the two countries.

The Egyptian Foreign Minister explained that the talks dealt with bilateral relations and how to activate them and work to find opportunities for cooperation in all fields, all of which will be activated within the framework of the joint committee that we agreed to form.

Minister Shoukry added that all areas are open for us to move forward and face common challenges and work to advance joint Arab action and achieve the aspirations of our peoples.

He also stressed that Egypt’s participation in the Negev meeting was aimed at promoting peace in the region, noting that no alliance was intended to be established in the region.

The Egyptian Foreign Minister explained that the resumption of negotiations between the Palestinians and Israel played an important role in the Negev summit talks, noting that the region faces challenges related to terrorism and extremism.

Minister Shoukry indicated that Egypt supports the Libyan political path to preserve Libya’s unity and stability, adding: “We are communicating with all Libyan parties to support understanding and reach political solutions away from the military conflict.”

For his part, Qatari Foreign Minister Sheikh Mohammed bin Abdulrahman Al Thani said: “Relations with Egypt are in continuous development, and we have overcome the stage that was marked by some tensions, with an open heart and a future perspective, as far as the interests of our two countries are concerned”.

“We discussed bilateral relations with Egypt and its transfer to broader areas and multiple fields, and we stress the importance of Egypt’s pivotal role in the Arab region, and we will support this role and the consolidation of stability,” he added.

And the Qatari foreign minister concluded: “We hope that the Egyptian team wins the play-off against Senegal to qualify for the World Cup.”