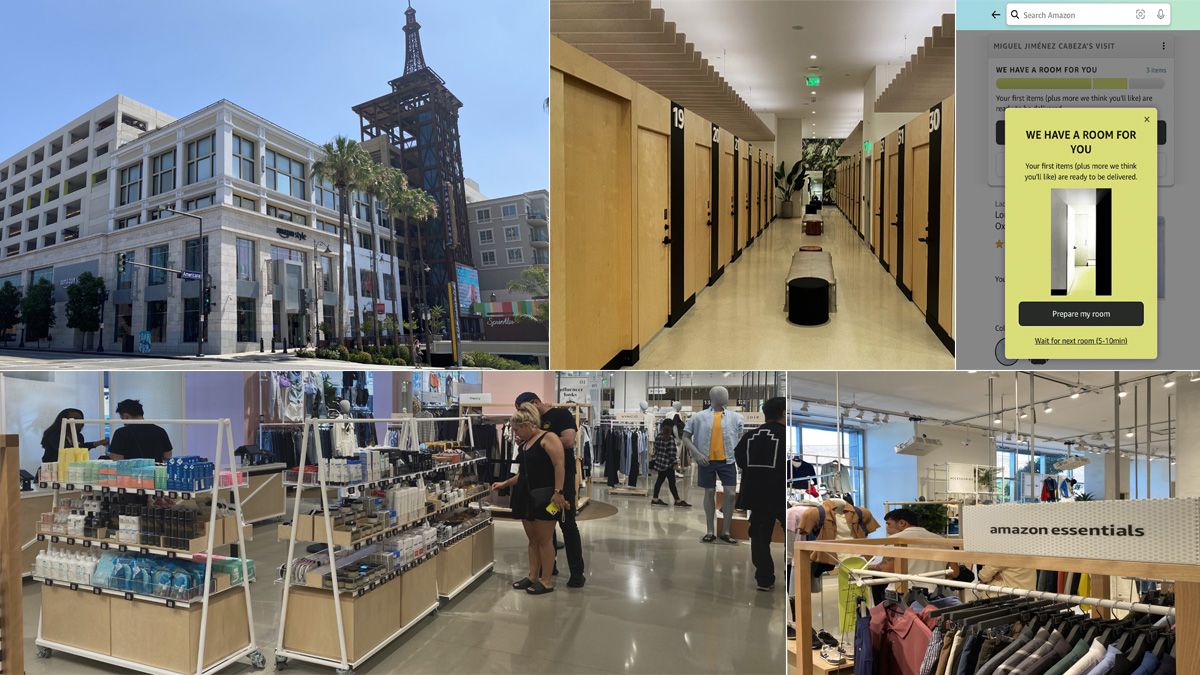 “It’s the future”. One of the employees proudly explains how Amazon’s first physical fashion store, which recently opened in Glendale, a suburb of Greater Los Angeles, California (USA), works. Amazon Style is another store with a shopping experience that can amaze the shopper. An algorithm that selects the clothes for the customer and magic closets with a secret door in the dressing rooms make the difference.

Spanish group Inditex is a pioneer in integrating physical and digital stores. In some respects, the store is reminiscent of the recently opened Zara in Madrid’s Plaza de España, for example. In others, however, it goes a step further and somehow integrates some of Amazon’s logistics potential with the algorithms and experience of the physical store. It will work? It’s not at all clear that the Amazon Style Store is really the future, but that’s how it works in the present.

The Amazon Style Store is located in the Americana at the Brand Mall from Glendale. Glendale is the amazing American capital of the Armenian diaspora. Around 40% of the almost 200,000 inhabitants belong to this nationality, according to different sources. Tycoon Rick Caruso, billionaire real estate developer and California Political Star of the Year, favorite to win the Los Angeles mayoral election in November, built one of the most profitable malls in the world here.

Americana at Brand takes inspiration from Boston’s historic Newbury Street. Taking advantage of California’s mild climate, it’s an outdoor shopping mall that Caruso has also used to promote housing. There are lampposts with background music, a plaza with pristine grass, golden statues, and monumental fountains with water and light effects. Kind of a perfect little world. The occupancy of the premises and apartments is 99% and Tenants include Apple, Tesla and Tiffany. The Amazon store occupies a huge space at one end next to another H&M store. There is a Zara store in the neighboring Glendale Galleria mall.

2. One store and many brands

The customer, as soon as he enters, finds himself with a huge QR code and a group of smiling and friendly staff ready to greet: “Is this your first time?” they ask, and each of them offers, to act as a guide. .

First of all, of course, the code has to be scanned. This will open the Amazon application, which as you will see is essential to the purchase process. The store has two floors but the clothes are all on the first floor. Upon entering, women’s clothing. In the background that of the men, the space between the two being bisected. There are also some beauty products, perfumes and other accessories near the two boxes.

The store is multi-brand. Unlike the fashion leaders like Inditex, H&M or GAP, which only have their own brands in store, at Amazon Style you can find clothes by Levi’s, Adidas, Champion, Calvin Klein, Kendall & Kylie (the brand of the Jenner sisters), Lacoste , Lee, Nautica… Of course, part of the space is dedicated to their own brands, mainly Amazon Essentials and also The Drop.

Some of the garments on display are inspired by the style of social media celebrities. A photo of the influencer appears on a panel, and next to it is a piece of clothing that, sometimes more successfully than others, mimics what the celebrity is wearing. In general, only a few sizes and colors are shown for each model, but that does not mean that they are not available.

Last Tuesday morning, after business hours, there were few customers and many vendors.

Each garment also has its QR code. With the Amazon app open, a customer who sees something they like can tap their phone and quickly scan the code. The application shows the available colors and sizes. After choosing the garment you want, you can press the button to try on the garment: try on. This triggers a logistical process to book a fitting room and get the garment there. It’s getting a little long. On Tuesday, with the store half empty and the dressing rooms empty, it took more than 15 minutes from the first choice and between 5 and 10 minutes from the last. It’s not clear if the store won’t be able to keep speeding it up or give the customer time to keep shopping.

Meanwhile, the application offers the customer the opportunity to say which clothes they are interested in. After the indication of height, weight and sizes, the program will ask the customer if he wants casual elegant sportswear. After a few more questions to refine his suggestions, he shows an item or model on his phone: “Would you wear that?” The client replies yes or no. “And the?” And so they go through photos, like a Tinder of clothes, until the algorithm gets an idea of ​​what might interest the customer. The program learns through trial and error, and after a slightly crazy start, it ends up being a bit more correct.

Apart from loose clothes, the buyer can choose a full set of clothes exposed. The code is scanned and the pants, shirt, jacket, shoes and hat are selected at once, each in the size specified in the survey.

A while after choosing the first clothes, a message appears on the mobile phone: “We have a dressing room for you”. And an announcement: “Your first items (and a few more we think you’ll like) are ready for delivery.” You can ask for the dressing room to be prepared, or wait a little to continue shopping. If the customer wants to move on, minutes later another notice appears: “Changing room 23 is ready for you”, with a button that serves as a key to open the changing room on arrival. If you don’t need to try on clothes, you can have them delivered straight to checkout.

The dressing rooms are without a doubt the most special part of the store. Not so much because of the booking process as because of what happens when you get there. There are 40 dressing rooms, more than half of which are on the second floor, where there are no goods. First, a large touchscreen greets you with the customer’s name. On a hanger and some shelves are the requested items. But not only them. As the app said, there are also other items of clothing that Amazon’s algorithm thinks the customer might like based on what they selected and which items they would wear if they answered questions about their style. Some are actually one of the garments that passed in this survey. Other, items that fit.

By pressing the screen, both the items that are in the dressing room (the selected ones and the proposed ones) and other additional suggestions appear. Both the additional clothing items that have appeared in the dressing room and those suggested on-screen are translations of the “most bought together” or “you might also be interested in” features that appear upon purchase on-line on Amazon. If an item is pressed on the screen, new offers appear: “More similar items” or “Complete your Look” are the messages.

What happens if the customer tries on a shirt and it is too big for them? Or do you like one of the suggestions? Well, just order a size down or that other item easily and intuitively from this screen. Once the request has been made, a message will appear on the screen: “On the way”. The closet with secret door comes into play. When the customer reaches the fitting room and opens it, he sees an empty closet, but it actually has a hidden back door. When the cabinet is closed, a red light comes on blocking the door and then, for theatrical effect, a white light comes on inside. As if by magic, when you open the door, what has been requested will appear on the screen. Behind it, a warehouse, a logistics and distribution system made it possible in just three minutes.

Once the customer has decided what he wants to buy, he takes it with him and leaves the rest in the cloakroom. Someone will come to pick it up.

5. With the palm of your hand

A glazed area of ​​the store shows how behind it is a logistics area and some elevators that allow the system to operate. As automated as the algorithm and warehouse are, it appears that some people are working on getting things into the right dressing room relatively quickly.

The customer has to go through the box to pay. You can do this with just the palm of your hand if you’ve activated Amazon One, which you’ve rolled out at your Whole Foods grocery stores, Amazon Go, and Amazon Fresh. If not, any other form of payment will work, although you cannot pay through the application. Next to the cash registers, next to the entrance, is the online ordering area, in which the system is also not automated.

“It’s great,” said a young woman who left the store Tuesday after buying some clothes. “I haven’t found anything I like,” complained another woman. “This system probably isn’t for me,” said one woman. The store is original and different, but feels more like a testing lab than a business model.

The experience is fun to try, but it doesn’t seem very functional. The suggestion algorithm can work and serve as a temptation for unplanned purchases. However, a lot of commercial space is lost with such a demanding storage and logistics system. In addition, waiting times delay the purchase process, even if the store is empty. A large influx of people would put the whole mechanism to the test and a lot of manpower is needed.

Despite some advances, in many ways it lags behind Zara and other Inditex stores, which during the Pablo Isla period adopted the strategy of integrating the physical and digital stores it maintains in the new phase. For example, in the most modern Zara, the Pay&Go system allows the customer to scan the product, pay for it with the application, remove the alarm and take it home without having to go through the checkout. It’s something that can be done in your Amazon Go stores, but that’s not currently possible in Amazon Style. The Zara application also allows you to find clothes in store or automatically pick up online orders. They collapse in the virtual tester queue, at Zara you wear the clothes yourself. And don’t forget that we’re talking about fashion. Inditex makes thousands of designs and the results prove people like them. The product is just as important or more important than the shopping experience. Chinese Shein has emerged as a great alternative due to the product and price.

Not to mention returning in-store purchases on-line. Amazon Style also allows it, but there is only one store in the world. There will be more? It will depend on the outcome of the Glendale deal or the scale Amazon wants to expand its experiment to. It’s an e-commerce and cloud-computing behemoth, with billions of dollars in resources and willing to lose money for years if it thinks a business model has a future. Does this one have it?

Guindos does not rule out that a recession in Germany due to cuts in Russian gas will “sweep” the eurozone.