She overcomes anorexia and gives birth to 9 children 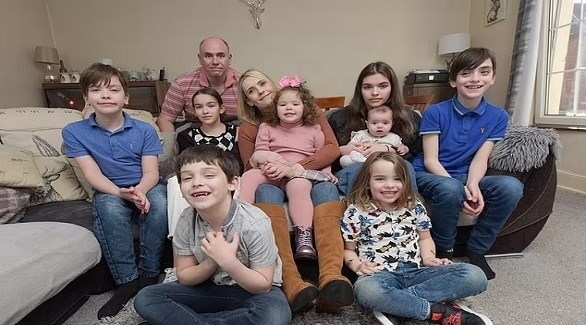 A British woman became a mother of nine despite doctors telling her her anorexia had left her sterile.

Leah Williams, from Tinbury Well, Worcester, reached her lowest weight at age 20 and was the mother of a son, Jacob, and was warned by doctors that she would not be able to have any more children in the future due to the impact of the eating disorder on her body Leah thought “the damage had been done” because her period had stopped.

At the age of 24, she is on the road to recovery and now, two decades later, Leah, 40, has defied the odds and has eight other children between the ages of 4 months and 15 years.

“I never imagined having a big family,” Leah said, “especially after my doctor told me I couldn’t have any more children due to anorexia.”

Leah developed an eating disorder at the age of 19 after having her wisdom tooth removed, she was unable to eat and her condition deteriorated over time, until she became something of a skeleton.

Leah received medical advice and overcame anorexia at the age of 24, and has since been able to have many children. Our family is messy, crazy, but beautiful.”

“It’s a miracle that my body is back to normal, and my doctor is still laughing to this day because he can’t believe I was able to defy the odds and have so many children,” adds Leah.