Sexual images that destroy and kill 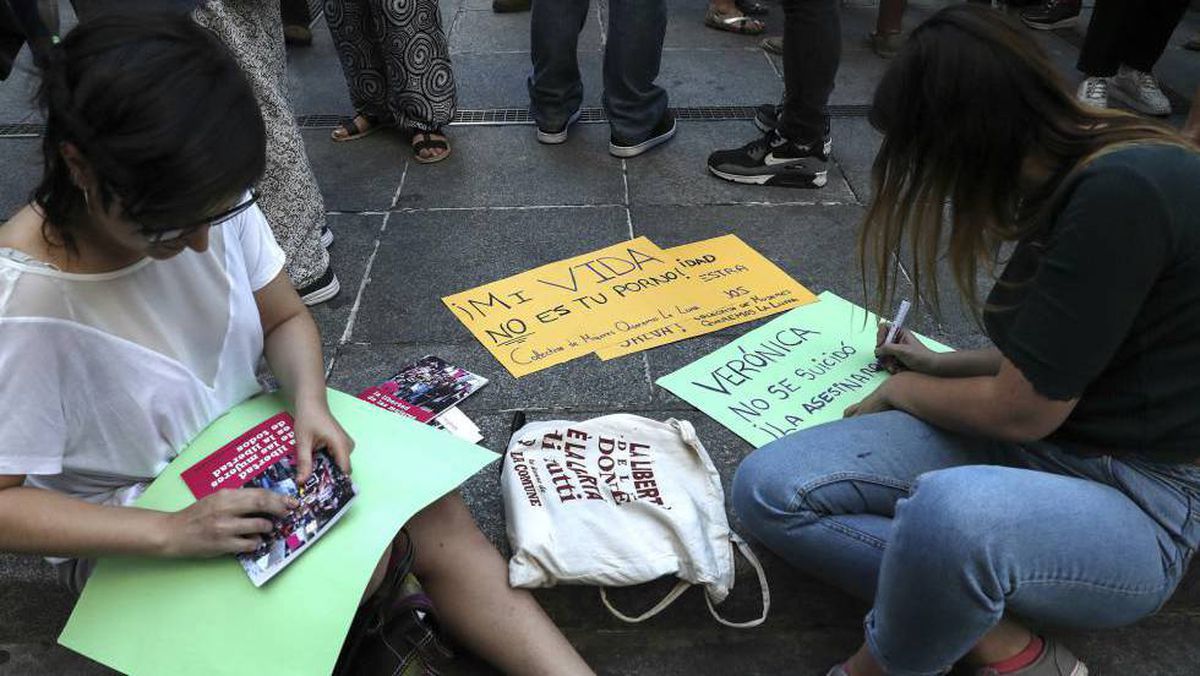 Veronica took her own life at the age of 32. He had a partner, two daughters under five and worked at the Iveco industrial vehicle factory in Madrid. “He was cheerful and had normal relationships with his colleagues,” recall the colleagues at a plant that now has 2,400 employees. Veronica had a life together, like any person’s. That everyday world collapsed in 2019 when a video taken during an old relationship and containing sexual imagery in which it appeared circulated among some of the workforce. On May 25, he committed suicide at home. It is the most serious known case of non-consensual retransmission of intimate content in Spain, a practice that allows us all to become victims (50% of adults share sexual images or texts) or guilty because the distribution of these without consent is a Crime.

Invasion of privacy is widespread. There are no accurate statistics as not all cases are reported. But when the person concerned is popular, as in the case of actor Santi Millán’s viral video of a sexual relationship that broke this week, the alarms go off again. The artist limited himself to pointing out that he was the victim of a crime and refused to make any further statements.

The case that opened the eyes of society happened in 2008. Jessica Logan, an 18-year-old American girl, committed suicide due to the harassment she suffered after spreading among her classmates some images of a sexual nature that she had were sent to her friend and distributed without her permission. “Young people do it as a bargaining chip, to improve their reputation among their peers or as a token of love,” explains Mónica Ojeda, professor of psychology at the University of Seville. Jessica’s mother facilitated the initial investigation into these data breaches.

Four years later, a similar case is registered in Spain. Former socialist councilor of Los Yébenes (Toledo) Olvido Hormigos sends an intimate video to a person with whom she had relations and it is being distributed without her consent. Hormigos has managed to overcome the whirlwind created on social networks and after going through various TV shows, she has returned to her city where she worked as a decorator and wants to focus on teaching. He wants to turn the page and has also given up making statements.

The silence is understandable. Each comment leads to an uptick in internet searches for the videos broadcast, not their episodes. Josep Coll, director of RepScana company specializing in online reputation, explains that “crises recur in these cases, but they can be avoided”.

Both Verónica’s and Olvido Hormigos’ cases ended up in court with impunity. The courts dismissed the lawsuits. On the one hand because of the “lack of a known author” and on the other hand because the law challenged at the time only provided for the disclosure of illegally obtained secrets and the video of the former mayor was shot and initially sent out voluntarily.

However, socially they are still alive or reopened with each new similar case. Both Hormigos’ and Verónica’s experiences have inspired the series privacywhich was recently released on Netflix and which reflects the consequences of the crime of invasion of privacy and in particular the pack of accomplices of social networks, particularly dramatic in the case of Verónica.

“The universal thing is to be vulnerable, to be afraid that they will lose respect for us. What is normal is that there is an essential difference between what we project and what we retain. What’s not common is having unassailable self-esteem or exemplary stoicism when we’re already adults and have kids, like she did,” explains the co-author of privacy Laura Sarmiento.

The creator highlights the micro world inspired by the Iveco worker in her, which could be a teaching center and where the invasion of privacy is oversized until it becomes unbearable: “The context of the factory allowed me to imagine a miniature world imagine scale, a parallel to reality, where a scandal can acquire enormous weight. It must have been very difficult for her to put the meaning of the leaked video into perspective. I imagine the constant looks, mocking, even lewd. It is said that the content of the video was humiliating for her. Whoever spread it, who appeared to be a company employee who had had a relationship with her in the past, wanted to cause as much damage as possible.

They thought it was a big joke, little more. She doesn’t excuse that. They dehumanized them and turned them into a prankster so they could enjoy themselves at their expense. The consequences of this were not taken into account.

“Those who enjoyed watching and commenting on the video certainly didn’t expect it to end like this,” adds Sarmiento. “They thought it was a big joke, little more. She doesn’t excuse that. They dehumanized them and turned them into a prankster so they could enjoy themselves at their expense. The consequences of this were not taken into account. More than one certainly concluded from the video that it had to be someone insensitive, unworthy, who therefore could not claim respect. After the video went viral, her booth was apparently constantly visited, as if she had become a monkey at the fair. Some have even suggested that exposed sexuality implies absolute, indiscriminate availability, blind and sick desire. “They think I’m for sale,” I identified the protagonist Privacy”.

“When I saw the series and remembered it, it made me sick,” says a colleague of Veronica’s, who prefers not to be identified as an inhabitant of this heavy and dense microworld. “I don’t know why we’re going crazy, why we don’t delete the video but share it, get cool, grow up and enjoy it. They weren’t all, but they were enough. Factions were formed between those who disliked him and those who didn’t care. The company didn’t know how to channel what was happening. What she did was put her on the early shift that Veronica wanted, and she herself tried to turn the page. But I don’t know what kind of shitty society we live in for that to happen,” he recalls.

The explanations are varied and complement each other. One is that technology makes it easy and immediate. The other is a psychological mechanism known as moral disconnect, which allows an individual to convince themselves that the criteria they apply to themselves do not apply to others. Another reason is to use these images to gain relevance in social relationships through gossip. And the most perverted thing adding humiliating comments to the news is the desire for social punishment.

“People are significantly more likely to reveal another person’s secret when they consider it immoral behavior because it satisfies an emotional, perhaps unconscious, need to see that person punished,” said Jessica Salerno, a professor of psychology from the Department of Social Behavior Sciences at Arizona State University and author of a published study last February.

Given the complexity of avoiding the crime of syndicating confidential content, only two avenues remain: the legal and the technological. The case of Hormigos led to a reform of the criminal code include as a criminal offense the distribution, disclosure or transmission of images or audiovisual recordings without consent. Borja Adsuara, lawyer, consultant, university professor and expert on digital law, privacy and data protection, explains that the so-called “Only Yes is Yes” law, which is being amended in the Senate, amends Article 172 exclude the adverb “serious” from cases of harassment that disrupt daily life the victim.

The reform includes a new section that punishes with imprisonment or a fine whoever “uses, without the consent of its owner, a person’s image (…) by any means for public dissemination and causes a situation of harassment, harassment or humiliation. “. “The swarm can even kill, and that will be made into the law,” he explains.

But Adusara concedes that “the good intentions of legislative reforms are difficult to apply because there is an intentional element that needs to be proven”. He adds that when a secret is intimate, he also focuses on pictures. “In Spain,” he explains, “there’s a loose interpretation because theoretically you can’t invade someone’s intimacy without their consent, but in the poorly named programs of people’s heart secrets of life that seriously undermine your privacy, you can without.” Your permission. That did a lot of damage because we normalized it.”

And he adds: “We are a sick society on the one hand and hypocritical on the other because we criticize what most people are supposed to do. In the 21st century, there are still people who think sex is dirty. Or as with harassment, which is also a crime against moral integrity: there isn’t just one perpetrator who harasses, but those of us who do nothing or even laugh at it.

The other front is technology. The director of RepScan, recalling that online reputation is a right and not a sentence, explains: “Currently, with the technology that we have, it is possible to remove videos that violate privacy.” “What not what is going on,” he warns, “is to stop it on WhatsApp or Instagram, which is one of our demands. They hide behind communication secrecy, but freedom of communication is fine as long as it doesn’t violate people’s rights.”

Josep Coll explains that his company not only eliminates content, but also achieves de-indexing that does not appear in search engines and reputation, eliminating false negative reviews and having positive content reflected in the results of the queries. Coll confirms that they have increasing cases of harassment or blackmail based on sexual content or other types of intimacy. “It’s a problem because we all have a camera in our hands right away, but we have to work in a way that minimizes the damage,” he concludes.