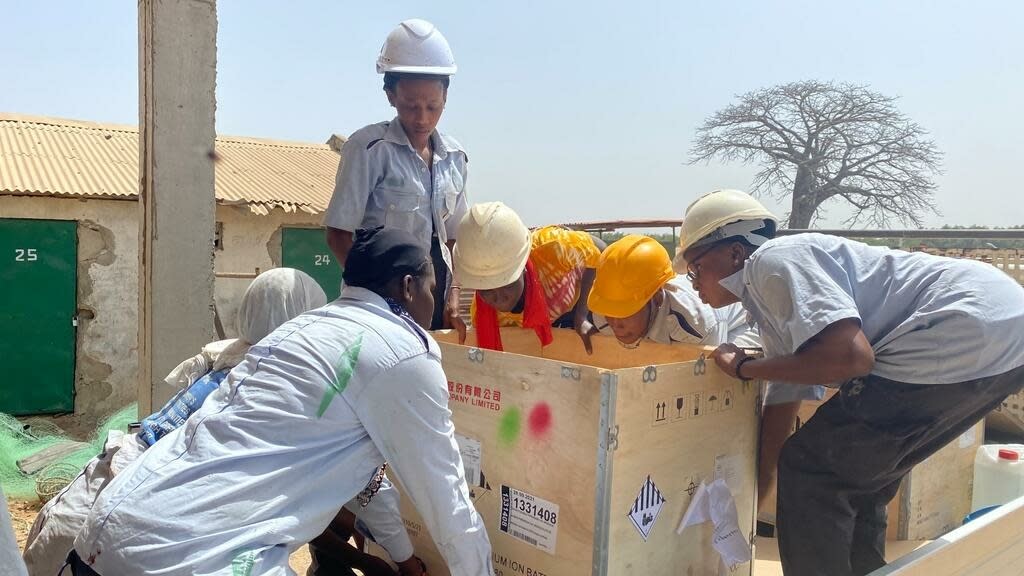 Former Gambian high school dropout Fatou Njie thought fish would be in her future, but not in the way she sees them now.

“I started out selling fish on Tanjai beach,” he says, adding that he initially wanted to finish school and go to university, but lacked the funds and qualifications to go on.

One of the places she frequented to collect firewood was Fandema, a women’s development center that provides vocational training to uneducated women and girls who have dropped out of school.

“I saw older women learning solar installation and other skills there,” says Njie.

“I made inquiries and was lucky enough to be enrolled in 2013.”

The former fishmonger went from solar panel installation student to trainer, one of 20 young women now working as trainers.

Njie leads a team of 16 girls to work on a solar ice machine for fish vendors in Kartong to keep their fish fresh.

Fandema, or self-help in Mandinka, is a community project of the Mbolo Association to provide skills and education to women and girls in fields normally considered male-dominated.

Project coordinator Malang Sambou said that he was motivated to start this project because he came from a family that prioritized male education.

“My mother, the first daughter, did not go to school, but all her brothers, my uncles, did go to school,” says Sambou. “So our main goal is to provide these women with an education.”

The group targets young women who have dropped out of school, a problem that affects more than 50 percent of the Gambian female population.

The Gambia 2020 fact sheet states that 55 per cent of girls dropped out of school before or during secondary school.

Data from the Gambian Ministry of Basic and Secondary Education indicates that the number has decreased slightly due to Covid-19.

Some young women, like Jama Ceesay, who have been forced to stay home due to the pandemic, have seized new opportunities. She is one of 16 students currently enrolled at Fandema.

“My dad told me about Fandema. Each community sends two people to be trained at the center, but for my community, I was the only one chosen and returned home,” she says.

“Everyone trusts me to use the skills learned here to help them and luckily I can now repair any solar panel installation,” Ceesay tells the Africa Calling podcast.

Improving the lives of other women too

Kartong, one of the largest oyster fishing and harvesting sites, attracts women from all over The Gambia. These women supply fish to other parts of the country, such as Basse and Jarra Soma, but they lack ice blocks to store their fish safely.

“We can’t wait for the ice processing center to be completed because we don’t have electricity here and Fandema brought us solar power,” says fish vendor Isatou Jabang.

“We’ve been waiting a long time for this and we need it as quickly as possible because most of the time when we don’t have ice blocks our fish goes bad,” he says.

The theme of this year’s International Women’s Month is to end prejudice.

This story was first heard on RFI’s Africa Calling podcast.