Selenskyj asks in the Bundestag for more help for Ukraine and criticizes: Germany is not fulfilling its historical responsibility 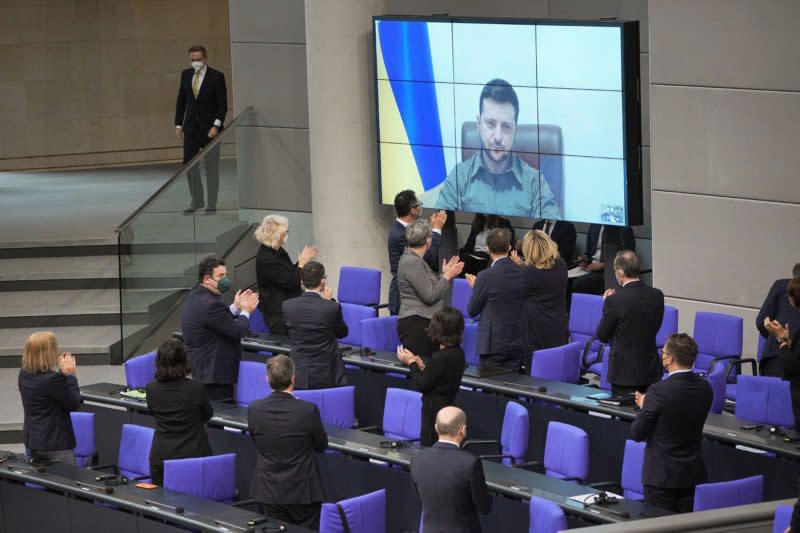 Three weeks after the Russian attack on Ukraine, Ukrainian President Volodymyr Zelenskyj spoke to the Bundestag via video message. He criticized Chancellor Olaf Scholz (SPD), members of parliament and businesses for their hesitant behavior on sanctions and support for the Ukraine war.

Sanctions came too late to stop the war. Too many companies would not say goodbye to Russia. “There is another wall in the middle of Europe,” Zelensky said, according to the translator, and this wall is strengthened with each bomb that falls on Ukrainian soil and with each decision that is not taken. Selenskyj therefore makes a direct appeal to Chancellor Olaf Scholz: “Dear Chancellor Scholz, destroy this wall. Give Germany the leadership role that Germany deserves!”

Addressing the members of the Bundestag, he says: “Please help us!” In his country, civilians and soldiers are now indiscriminately targeted by Russian attacks. “Russia is bombing our cities and destroying everything in Ukraine. These are residential buildings, hospitals, schools, churches, everything. With rockets, with aerial bombs, with artillery. The occupiers killed 108 children in central Europe, in our country in 2022,” Zelenskyy said. And: “Once again, the people in Europe are trying to destroy all the people”, an allusion to the time of the Second World War.

In his speech, the Ukrainian president also referred to decisions in support of Ukraine, some of which were rejected or had not yet been taken: Ukraine’s entry into NATO was not approved. “And now there are still doubts about Ukraine joining the EU,” Zelenskyy said. For some it is politics, for others it is a stone in a “new wall” against Ukraine.

He also criticizes that the demands for preventive sanctions against Russia are not being met. Instead, according to the Ukrainian president, it is always about the economy. “We feel your resistance,” he tells the Bundestag and the chancellor. He has always warned that the German-Russian gas pipeline is a Russian weapon.

In addition, the Ukrainian president addressed the Bundestag on behalf of the occupied city of Mariupol and again demanded a no-fly zone, according to which Russian planes would no longer be able to fly in the airspace over Ukraine. This is the only way to create an air bridge to help people who have to go 24 hours without food or water.

“I am writing to you, who also lived through the occupation 80 years ago”

In his speech, Zelenskyj also drew parallels with the World War II era: “I am addressing you, who also experienced the occupation 80 years ago,” he says. That should never be repeated, but now another attempt is being made in the Ukraine to annihilate an entire people. The people of Ukraine want to live freely and not submit to another country that considers Ukraine as its own.

The Ukrainian president criticizes that Germany is not fulfilling its historical responsibility. You do not protect Ukraine, although 80 years ago you saw how many people were killed.

- Advertisement -
Share
Facebook
Twitter
Pinterest
WhatsApp
Previous articleVoices: Those of us who knew Nazanin hardly dared to believe that he would come home.
Next articleF1 News LIVE: Sebastian Vettel out of Bahrain Grand Prix after positive Covid test