Schulz and Erdogan stress the need for a ceasefire in Ukraine 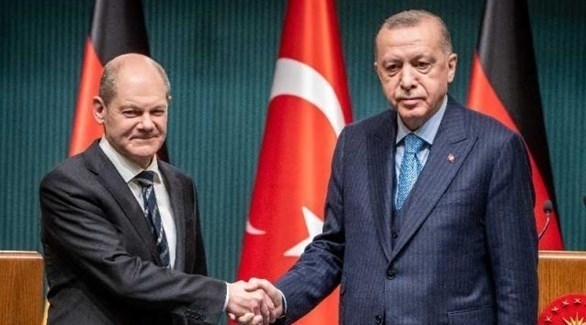 German Chancellor Olaf Scholz and Turkish President Recep Tayyip Erdogan stressed in Ankara on Monday the need for a quick ceasefire between Russia and Ukraine and the desire to continue their military cooperation with Kiev.

This is the first meeting between the leaders of Turkey and Germany, members of the North Atlantic Treaty Organization, since Schulz became Chancellor, succeeding Angela Merkel (2005-2021).

During a press conference, both highlighted the quality of the bilateral talks, which took place in an “atmosphere of frankness” according to Erdogan, and were characterized by a “constructive and fruitful” character, according to Schulz, who welcomed “the efforts in favor to reach a diplomatic solution”.

Asked about his country’s neutrality in this dispute, Erdogan said he wanted to “preserve friendly ties with (Ukrainian President Volodymyr) Zelensky and (Russian President Vladimir) Putin.”

“We have sent the necessary assistance to Ukraine and we will continue,” the Turkish president added.

Ankara has supplied Kiev with combat drones since 2019, which Ukraine has used since the start of the conflict to attack Russian tank columns.

In this regard, Schulz said that “Turkey sent weapons to Ukraine, not just humanitarian aid. We must take that into account.”

Schulz visited Moscow before the invasion began and spoke several times with Russian President Vladimir Putin, but in the meantime worked to strengthen his country’s weaponry.

On Saturday, the German chancellor called French President Emmanuel Macron with the Russian president, the day after the European summit, which was held in Versailles, near Paris.

For a researcher at the German Institute for International Affairs and Security Gunter Swiffert, Olaf Scholz’s visit had as its main objective to persuade Ankara to take the position of the West and ensure that it remained on its side.

“No one is asking Turkey to join the sanctions imposed on Russia, but at least not to undermine them” by trying to circumvent them, he told AFP.

The German chancellor noted that “we have differences and differing opinions on human rights and the rule of law… but we hope that they will be quickly overcome.”

Schulz’s visit came in light of the tireless diplomatic efforts of Turkey, which last week hosted in Antalya, in the south of the country, the first direct talks between the foreign ministers of Russia, Sergey Lavrov, and the Ukrainian Dmytro Kuleba from the beginning of the Russian offensive.

The two ministers failed to reach a ceasefire but pledged to continue dialogue between their countries, which resumed talks on Monday morning via video link.

- Advertisement -
Share
Facebook
Twitter
Pinterest
WhatsApp
Previous article“Gigabit capital Berlin”: Senate and Internet companies are pushing expansion with fiber optics and 5G – Berlin
Next articleWhat are the prices and methods of booking tickets for the match between Egypt and Senegal in the 2022 World Cup qualifiers?