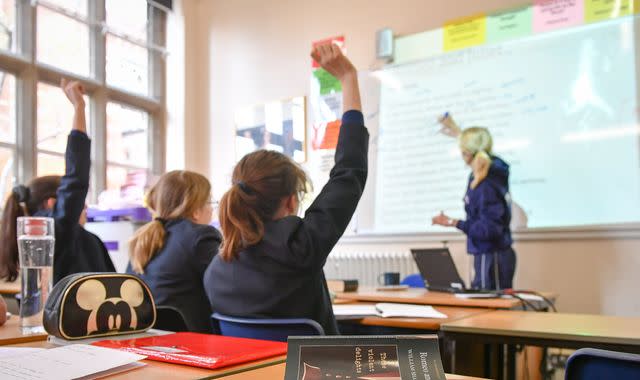 Pupils falling behind in English and math will receive extra support under new plans laid out by the education secretary, but the teachers’ union criticized the move as a “wet snitch.”

Education Secretary Nadhim Zahawi told Sky News the strategy would help those who didn’t have the “means” to put pressure on them in the same way he was an 11-year-old who didn’t speak a word of English.

Mr. Zahawi cited his personal background when laying out the details of a new white paper on education.

The government said the plans would be based on a target, set out in its Leveling Up strategy, for 90% of pupils to leave primary schools with expected standards in literacy and numeracy, up from just 65% in 2019.

Under the government’s “parent pledge”, schools will identify pupils at risk of falling behind, offering them support, including small group tutoring sessions, and parents will be informed of progress.

The white paper also aims for the national average GCSE grade achieved in English and mathematics to rise from 4.5 in 2019 to five by 2030.

Meanwhile, there will be more powers for councils to set up and run their own academic trusts and to encourage more primary schools to become academies.

Additionally, all schools will be required to have a week of at least 32.5 hours in length by September 2023.

Describing the plans in a speech in east London, Zahawi said: “Every day, every week, every month that goes by without children getting the education they deserve…more life chances fade…

“This is what keeps me up at night.”

Zahawi previously told Sky News: “I really like to talk about my background of being an 11-year-old who couldn’t speak a word of English but with parents who had the means to push me and look where I am today.

“I want the system to work for all children, wherever they are, in the right place at the right time, even with those whose parents don’t have the means or don’t have parents.

“It’s a really ambitious goal to ensure that every school in our country is high achieving.

“Right now only two-thirds of children complete primary school with the ability to read, write and do math at an acceptable level – that’s not good enough. I want it to hit 90%.”

Zahawi said a national tutoring program, designed to help pupils whose education has been disrupted by the pandemic, had already delivered one million tutoring blocks, with another million to come by the end of the school year, to a total of six million by end of the current parliament in 2024.

“Tutoring used to be the privilege of lucky parents, wealthier parents, now it’s available to all parents,” the education secretary said.

“I want parents who watch this show to ask their schools ‘are you participating in the national tutoring program?’ because we want to make sure that we deliver six million 15-hour blocks of tutoring for kids for recovery.”

Previously, the government faced criticism for the upgrade program when Sir Kevan Collins, appointed to lead it, resigned due to lack of funds.

Courtney told Sky News that the plans did not address the issues of child poverty, school funding and teacher recruitment.

Labor said it was a “smoke and mirrors ad”, arguing that developing good reading, writing and math skills should be core to the school system, not an “add-on”.

Shadow education secretary Bridget Phillipson said the strategy was “distracting from the business of teaching with further tinkering with school structures while offering nothing to change children’s daily experience in the classroom”.