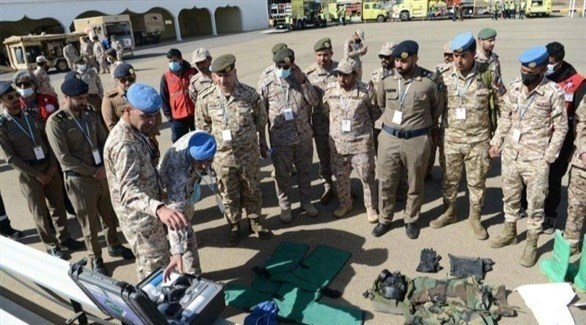 The two-week joint exercise “Sahab 4” between the Saudi armed forces and Jordanian forces concluded on Wednesday in the northwestern region of Saudi Arabia to confront weapons of mass destruction.

The Saudi Armed Forces, the Presidency of the Saudi Royal Guard, the General Directorate of Civil Defense and the Saudi Red Crescent Authority participated in the exercises, in the presence of the Commander of the Northwest Region, Major General Hussein bin Saeed Al-Qahtani .

The director of the exercise, Brigadier General Moqbel bin Muhammad Al-Harbi, confirmed that “the exercise achieved all the established objectives”, and explained that “participants were trained in reconnaissance, marking operations of contaminated areas, the mechanism for capturing samples and report writing.

He added that “the participants strengthened their skills in the construction of disinfection stations for vehicles and people, classification and evacuation of wounded from contaminated areas, in order to address the hypotheses of defense against weapons of mass destruction in the areas built with effective support. and distinguished.” of all participating parties.

For his part, Colonel Khaled Mahmoud Shamayleh, director of the exercise on the Jordanian side, stated that “the exercise led to the unification of common concepts, the exchange of experiences and the acquisition of training skills between the two parties.”

It should be noted that the “Sahab 4” exercise lasted two weeks, and included physical and mechanical examination, sampling, disinfection and evacuation of the wounded according to the medical evacuation series, in addition to reconnaissance of a terrorist house by manufacturing materials chemical and biological hazards and handling of ballistic missiles.