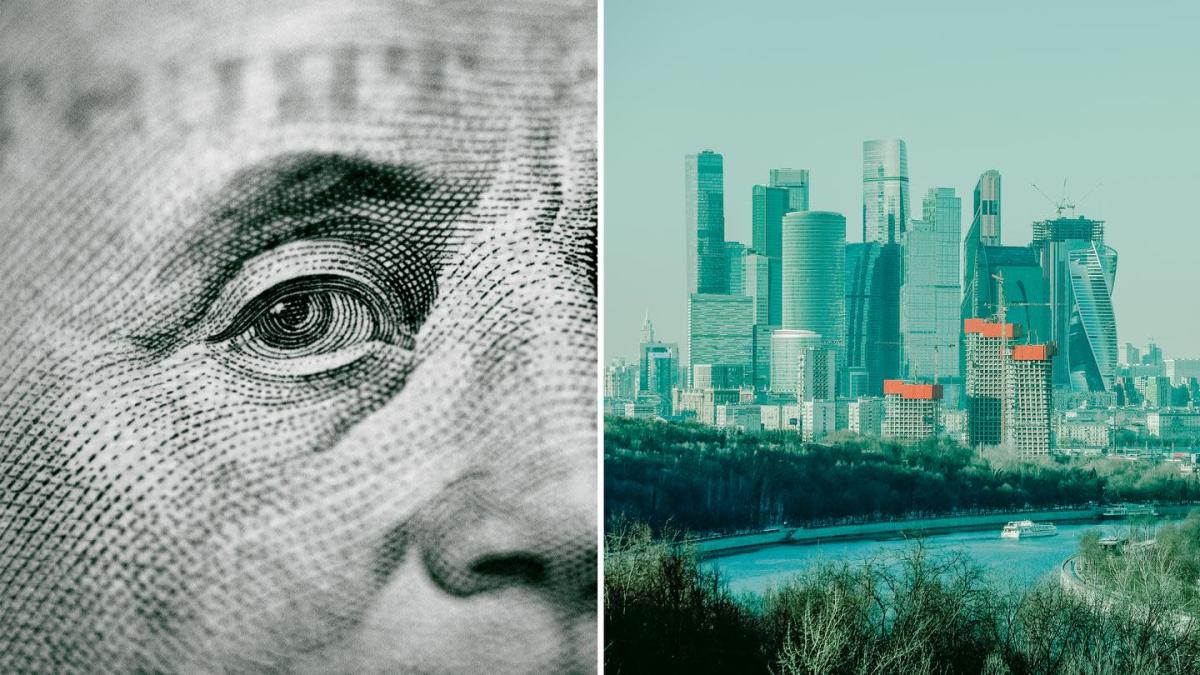 Western sanctions are hitting Russia with unprecedented force. This is mainly due to the “almighty dollar”. But there is also a gap.

The images of this war show the horror that tanks, rockets and cannons are causing in Ukraine. They show deaths, refugees, bombed cities. But there is an invisible and silent weapon in this conflict that is currently having a devastating effect on the aggressor: it is the financial market sanctions of the US and its allies.

Not only are they difficult for the public to understand, sanctions have also lost their threatening potential in recent years. Iran, for example, has been subject to US trade and transaction bans more or less since the 1979 revolution. Not only did they survive the regime in Tehran, but they are also arming themselves with nuclear weapons. and vladimir putin Russia must be punished and deterred from further aggression after the annexation of Crimea eight years ago. A strategy that failed spectacularly.

But the latest measures, supported jointly by the US, EU and Japan, have a force that no such sanctions package has ever had. “I always avoid using these military terms to describe sanctions, but in this case there’s almost no other way to describe it,” says Julia Friedlander of the Washington Atlantic Council think tank. The magnitude and speed surpassed any previous punitive action of its kind, says Friedlander, who previously worked as a White House security and economics expert.

Within days, Russia, with an economic output of $1.5 trillion, recently the eleventh largest economy in the world, was virtually shut out of international payment transactions. Much has been made of the expulsion of Russian banks from Swift’s interbank network after the invasion. However, the ban affects only seven of the 300 Russian institutes, at least so far. And with a bit of effort, resourceful transaction partners can still find a way to communicate. Or rather, he could have found it. If President Biden hadn’t thrown a much bigger punch: He effectively shut Russia out of the dollar zone.

The ban also affects Russia’s central bank. and with that putin obviously not expected. After the attack on Crimea in 2014, Russia’s de facto autocrat began arming his country against sanctions. Gold should make an important contribution to this protective shield, but above all foreign exchange reserves, which he had central bank chief Elvira Nabiullina invest, saved since 2015 from revenues from lucrative energy exports.

Putin’s problem: For the most part, it’s foreign currency, other than the US dollar, especially the euro and Japanese yen, which he no longer has access to. Although the Russian central bank also holds Chinese yuan, it is only about 14 percent and the Chinese currency cannot be used as flexibly.

Russia has another dimension

The fact that the United States freezes the foreign exchange reserves of unwanted regimes is nothing new. Until now, however, it has been the politically unstable suppliers of raw materials, such as Iran or Venezuela, that have not played a significant role in either world trade or the financial system. Just last month, the US government seized $7 billion from Afghanistan’s central bank to wrest it from the Taliban. But Russia has another dimension.

Russia’s foreign exchange reserves amount to almost 640 billion dollars. Only China, Japan and Switzerland have accumulated more foreign exchange reserves. In doing so, Putin wanted to keep the national economy and financial system running and, above all, to pay for measures designed to protect the Russian population from the costs of his war of aggression.

The reserves of money in foreign currency are necessary for the functioning of an economy, with them important imports are paid and the central bank can use them to support its own national currency by exchanging it for foreign currency. But this is how the effect of sanctions immediately: the ruble lost about 40 percent of its value against the dollar virtually overnight. It is currently less than a penny.

In Russia there were bank runs because people were withdrawing their savings. To stem capital flight and prop up the currency, Russia’s central bank raised interest rates to 20 percent and the government introduced strict rules on capital movements.

Another consequence of the confiscation of foreign currency is that Moscow cannot use it to pay its foreign debt. Last Wednesday, Moscow was apparently able to recover the $117 million owed by its creditors again. But if the sanctions remain in place, insolvency is likely to be inevitable.

In less than two weeks, the US and its allies hit the Russian economy so hard with this financial blockade that it is unlikely to recover for years. Even the carmaker Lada, which represents Russia’s dawn of the automobile age, has had to stop production because of a lack of parts from abroad. The recession expected from Western action marks the end of the economic stability that Putin reestablished in his country after the fall of the Soviet Union and to which he owes much of his popularity.

Putin himself has admitted how severely the measures are hitting Russia. During a television appearance, he spoke of an “economic blitzkrieg in the West.”

Ultimately, sanctions owe their effectiveness to the “Almighty dollar“. The US currency is still the main currency in the world. Again and again there are attempts by different nations to say goodbye to the dollar and switch to other currencies. EU countries have found a way to import Iranian oil despite the US embargo, with modest success, but the example of Russia, which can no longer access its hard currency, has apparently given other regimes pause.There is news that Saudi Arabia is in negotiations with China to partially liquidate the oil in yuan in the future.

The possibility that other currencies replace the dollar and that the sanctions lose their effectiveness is repeatedly invoked. In fact, the dollar is stronger than ever, says Robin Brooks, chief economist at the Institute of International Finance (IIF), a Washington-based institute created by international banks. This is largely demonstrated by the fact that the US currency is still considered a safe haven in the financial market in times of crisis, as was most recently the case in March 2020 when the pandemic broke out.

The dollar’s position isn’t based on global acceptance alone: ​​The Federal Reserve estimates that two-thirds of all $100 bills circulate outside the United States. Rather, the US currency forms the foundation of the global financial system. United States government bonds are considered the safest investment in the world. Foreign investors also flock to them, even when the United States is in crisis, as in 2008 after the bankruptcy of Lehman Brothers.

There may be alternatives to trading in dollars, but not for US Treasuries. What makes them so attractive is their high liquidity. Investors around the world know that they can sell securities at any time without having to accept a loss in value. To offer serious competition to the dollar, a currency must offer similarly safe and liquid investments. The yuan is far from it.

Energy exports as a gap

And even when it comes to preventing geopolitical interference, the Chinese currency is not the right choice. Hardly any other government intervenes so frequently in the capital market. The euro is also out of the question. Until the Greek crisis, the common currency seemed well positioned. But in 2011 the vulnerability of the euro became apparent. There is still no fiscal unit. These are risks that are difficult for financial market participants to calculate and prefer to avoid.

But never before has an economy the size of Russia been so insulated from the dollar. And there is a gap in the control of sanctions on Russia. These are energy exports. The Indian government recently purchased three million barrels of Russian oil, at a 20 percent discount price compared to the world market price. A government spokesman rejected criticism of the bargain hunting. After all, many European countries continued to buy Russian oil and gas.

Germany, in particular, does not want to do without so far. The argument that energy payments would not ultimately help finance the war is not valid for Robin Brooks of the IIF. He believes that a short-term waiver by Germany could significantly increase the pressure on Moscow. The Germans should use their purchasing power as a weapon. The costs of such an energy shock would be economically manageable.

Brooks, originally from Hesse, believes that the discussion in Germany is currently being carried out too cheaply. “Also, no one knows what the costs will be if this war goes on. An import ban has the potential to stop Putin.” The financial arsenal is not exhausted yet. But not all experts are convinced that even tougher sanctions can quickly end the conflict. “My concern is that we are destroying Russia economically while Russia is simultaneously reducing Ukraine to rubble,” said Julia Friedlander of the Atlantic Council. Then everyone would have lost.