Sánchez and Espadas conclude the campaign calling for a socialist mobilization to secure the June 19 election results. “to throw in the trash”. 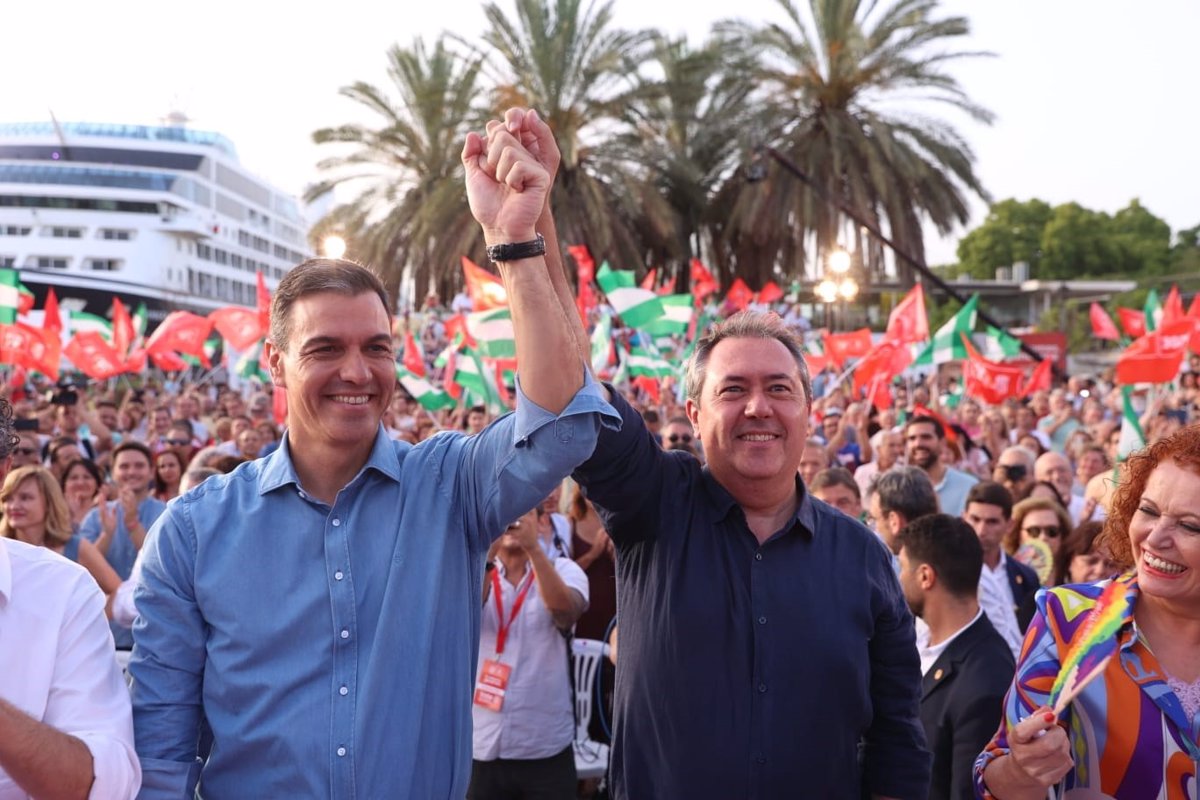 The Secretary General of the PSOE and President of the Government Pedro Sánchez and the Secretary General of the PSOE-A and candidate for the presidency of the Junta de Andalucía Juan Espadas closed the campaign for the elections in Andalusia on June 19 this Friday with a final appeal to the Mobilize the socialists to “throw in the trash” this Sunday the polls that predict a defeat of the PSOE-A in the elections and to “stop” the advance of “the right”, in reference to PP and Vox.

This is how the two socialist leaders expressed it during the final rally of the Andalusian election campaign this Sunday, June 19, which both shared in the presence of about 2,500 people at the Muelle de las Delicias in Seville , according to estimates by the socialist organization .

Among the participants were the Ministers of Finance and Public Administration, María Jesús Montero, and of Education and Vocational Training, Pilar Alegría, as well as the Minister of Agriculture, Food and Fisheries, Luis Planas; the organizing secretary of the federal PSOE, Santos Cerdán; the deputy secretary general of the PSOE-A and list leader for Jaén in the Andalusian Parliament, Ángeles Férriz and the secretary general of the UGT-A, Carmen Castilla, among others.

Both socialist leaders have agreed to make appeals that it is time for “the truth” and Juan Espadas has defended that the socialists have “a dream” that they will “fulfil” on Sunday if the Andalusians let those , which they decide, as he stressed.

In this sense, the candidate warned that “on Sunday the right will find out what Andalusia is, because the Andalusians will put their trust in us again” in the Socialists and “will send the polls to the wastebasket and the votes to the polls “. “It’s time for the truth, it’s time for the PSOE,” exclaimed Espadas, so confident that the Socialists “will win” that he bid farewell to militancy, saying, “Am 19 San Telmo, um to celebrate it”.

For his part, Pedro Sánchez concluded his speech by arguing that “the truth is that on the 19th nobody stays at home and goes to the polls on Sunday.

Espadas has intervened before Sánchez and has joined forces with the government president, claiming with “pride” the “path” covered by the PSOE in its decades of conducting the board and the work of all its presidents who “have left their skin”. . of this community, from Plácido Fernández-Viagas to Susana Díaz – mentions met with an ovation from part of the public – and has underlined that the PSOE “has taken seriously the importance of what will spend this Sunday on the streets go to ask to vote, build democracy”.

Espadas called for “thinking with the heart” that socialists “are able to give, if necessary, to those who need it”, as he believes is happening now in Andalusia, before stressing that these autonomous community “needs a readiness government ready to govern the day after the elections”.

Espadas and Sánchez have again alluded, as the socialist candidate has done on numerous occasions during this campaign, to February 28, 1980, the day when Andalusians chose a “first class” municipality. The Secretary General of the PSOE-A has stated that “the slogan of this campaign was ‘In the Moment of Truth'” and “the moment of truth” is now “next Sunday” and “if we vote, we win”. the socialists, he added.

“We’re going to do it again, get back in the Andalusians to pull this car,” predicted Swords, who also dedicated part of his speech to criticizing the management of the PP’s CEO and re-election candidate-A, Juanma Moreno, whom he accused has that he “devoted himself to confronting Sánchez and left Andalusians stranded in the pandemic” and who he has accused of having his “service” as a public manager “cut” to domestic help when he was foreign minister and agree with them to those who act against Andalusian autonomy”, in reference to Vox.

AGAINST ABSTAINING ON PP

Espadas has criticized that Moreno “wants to be elected because he is very photogenic”, while in Andalusia “you have to choose the one who gets wet with your problems”, and in this sense he has also rejected that the national president of the PP, Alberto Núñez Feijóo, He proposed to the Socialists to abstain to prevent the PP-A having to agree to Vox to govern.

“With what credibility do you now ask the PSOE to abstain?” Swords asked the “popularity,” recalling that they did not abstain when the PSOE-A was the most elected force in the 2018 election , and accused Feijóo of having “a hard, reinforced concrete face” for “asking for something they didn’t do”.

Swords has confirmed the call for “more rights and fewer rights” and has also criticized Moreno, “the lazy moderate”, asking for the Socialists’ vote in these elections after having “insulted” them. In light of this, he claimed that “we socialists are very clear that we are part of the solution and they are part of the problem, and what is needed here in the 19th are solutions.”

For his part, Pedro Sánchez, who began his speech with “remembrance and appreciation” to those suffering from the heat wave these days and to the troops currently active in fighting forest fires in different parts of Spain, also recalled February September 1980 and stressed that “the right” opposed the socialist commitment to a “first class” Andalusia.

Likewise, he associated with the socialist government of an Andalusian like Felipe González that the connection of AVE in Spain would start in Andalusia, and in this sense he invited the militancy to ask themselves “how the present and the future Andalusia would look like today if this had not been the case, would have produced 28F and Andalusia would have second-class autonomy”.

For this reason, the socialist leader has concluded that “the mobilization on June 19 is very important” and “there is only one choice that can stop the right wing, and that is that of the PSOE-A” of Espadas Sánchez pledged that if he is “elected” President, he will “work with” him to deal with issues such as those relating to the elderly and the unemployed.

Also speaking before Sánchez and Espadas were the Secretary General of the PSOE of Seville and Mayor of the Sevillian municipality of La Rinconada, Javier Fernández, and number two on the PSOE A list for the Seville Parliament, Adela Castaño.

Javier Fernández has underlined that in 40 years of democracy the Socialists have “never” lost regional elections in Seville and “on Sunday we will win again” in this province “and in Andalusia”, as he had predicted before calling the mobilization and that nobody stays at home on June 19 to vote and “choose the ballot that changes people’s lives”, paraphrasing the PSOE.

Finally, in her speech, Adela Castaño focused on dedicating words of thanks to the “campaign” developed by the PSOE, praising Juan Espadas, who highlighted his “empathy” and thanked him for “exciting” the socialists and all that he “taught” her personally.