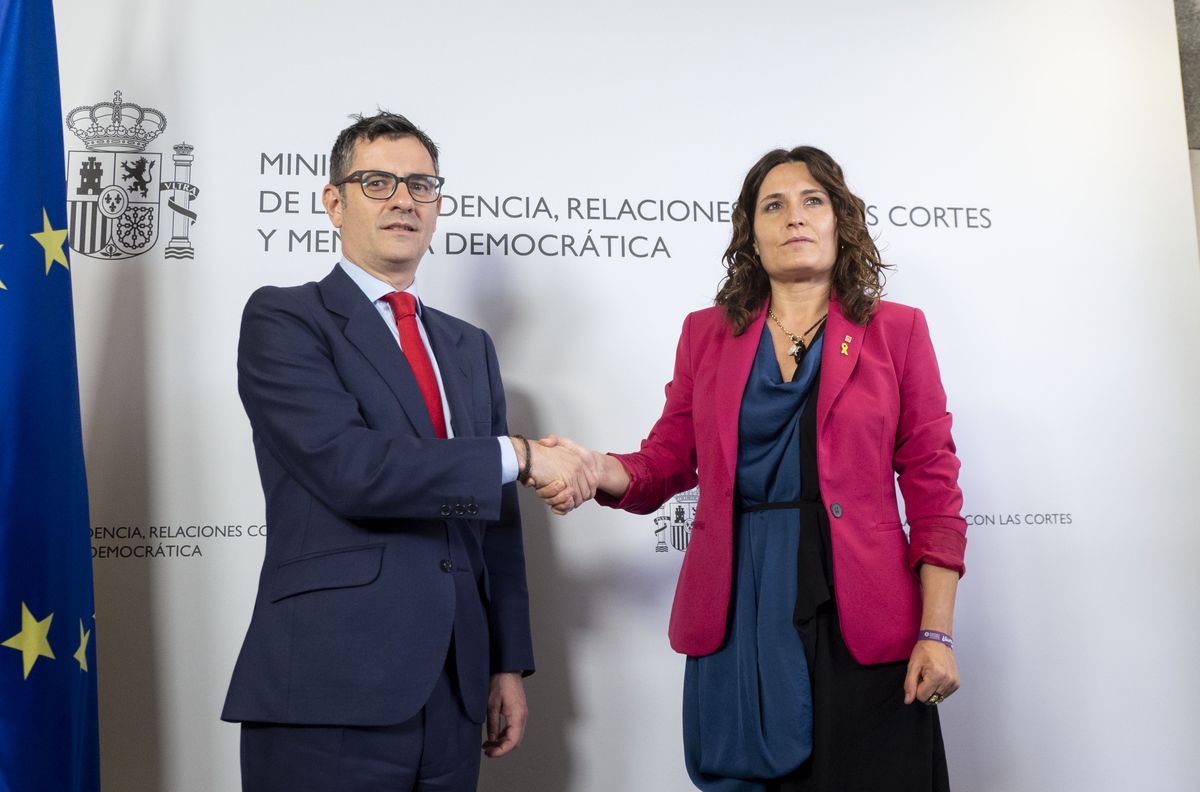 The meeting between Presidency Minister Félix Bolaños and Catalan Presidency Minister Laura Vilagrà this Wednesday ended with an announcement: their bosses, Presidents Pedro Sánchez and Pere Aragonès, will meet “in the coming weeks” finally speaking, the crisis of confidence triggered by the “Pegasus case” and exacerbated by the non-compliance of investments in Catalonia. It’s an appointment that’s been in the pipeline for months, and to which both were convened last May at the Barcelona business community conference. From the environment of president They assure that this time it will be serious. From the mere desire to meet in the Catalan capital, they explained, it has happened that both teams open their agenda to find a place for a meeting that they believe will be much more than a photo.

Vilagrà, who appeared at the headquarters of the Blanquerna Cultural Center (Bolaños did so in La Moncloa), has accepted that the meeting does not yet have a date but confident that it will take place shortly “before we go on vacation”. Sources close to Aragonès believe that this meeting cannot take place before the end of June and believe it is feasible for it to take place in July. The adviser explained that this meeting will seal the creation of “new guarantees and conditions that create trust” between the parties. “Without trust, there can be no negotiations,” he added.

However, the minister stressed that the meeting in no way implied that political ties between the two governments had “unfrozen”. These contacts ended up in the fridge afterwards Pegasus case. Aragonès is one of those spied on by this software of Israeli manufacture, although in his case there was a court order protecting the actions of the National Investigation Center (CNI). The pro-independence movement has been demanding clarification of the facts and guarantees of non-recurrence for weeks, and they are not satisfied with the center’s head of director, Paz Esteban, or with promises to change the law that regulates the CNI. A total of 65 independents were spied on through this program, according to a report by a Canadian research group.

“We need concrete facts, we need to have results in the next few days,” said Vilagrà of these new conditions that allow progress in rapprochement between the parties. There is also no date for a possible meeting of the dialogue table on the political conflict created by both governments, although Junts, ERC partners in the Generalitat, do not share it. Vilagrà recalled that the granting of pardons to the leaders of the process, celebrating a year this Thursday, is a “first step” but “others” are needed to end “the oppression.” The Republican has outlined an “anti-repressive agenda with European standards” modeled on the document adopted by the Council of Europe a year ago: Amend the crimes of sedition and rebellion, avoid withdrawing European orders against secession leaders who have traveled abroad, brought to trial in Spain to become or to drop the cases before the Court of Auditors.