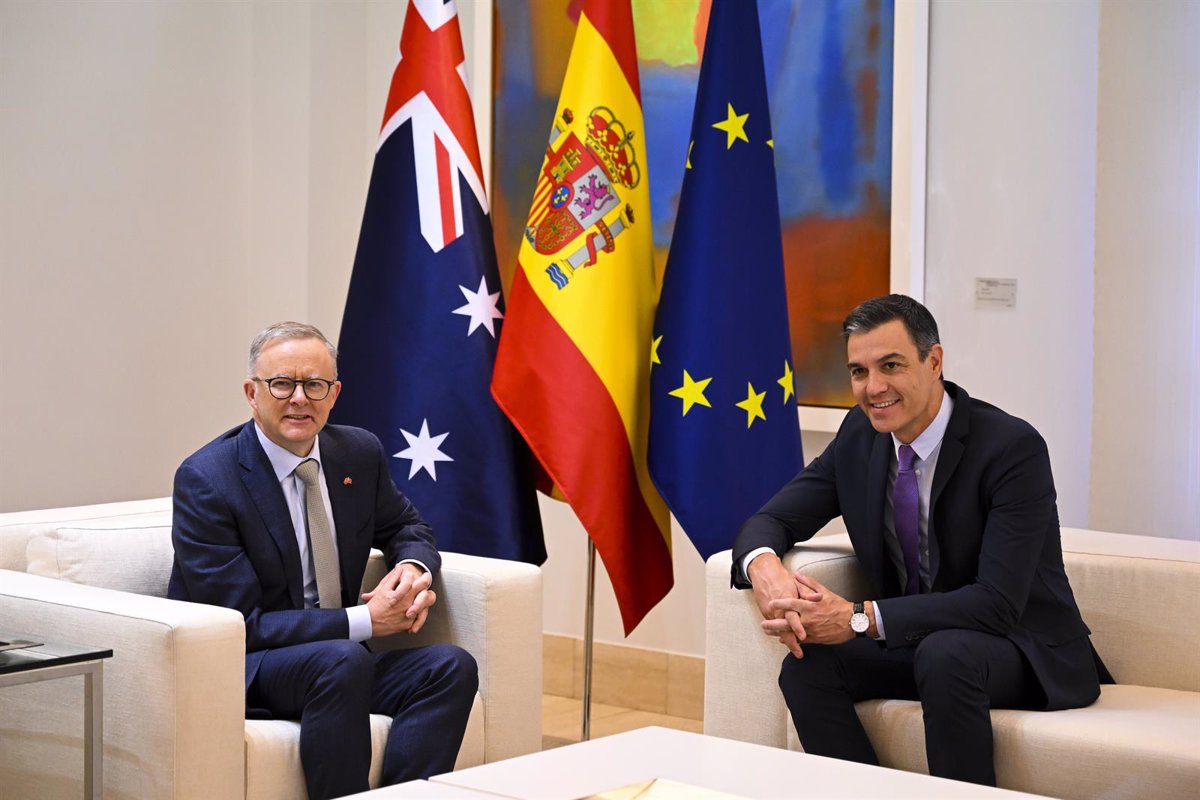 Both are calling on Russia to pull out of Ukraine and reaffirming their commitment to an “ambitious and comprehensive” trade deal between Australia and the EU.

Prime Minister Pedro Sánchez and Australian Prime Minister Anthony Albanese today agreed that Spain will send a high-level trade delegation to that country later this year, while both have reaffirmed their commitment to the swift conclusion of a comprehensive and ambitious trade deal between Australia and the European Union . Both are also calling on Russia to withdraw from Ukraine and be held accountable for the invasion.

This is the first bilateral visit to Spain by an Australian Prime Minister, having been received by the Prime Minister in Moncloa this morning as part of the NATO Summit in Madrid, which starts tomorrow and will last until Thursday.

After recalling that 2023 will mark 55 years since diplomatic relations were established between the two nations, both leaders reiterated the “cordial and productive relationship” between Spain and Australia and assessed the “strong growth” of the bilateral economic and and trade relations positive between both countries.

According to Moncloa, the Albanian Prime Minister welcomed the significant contribution of Spanish companies to Australia’s renewable energy and infrastructure sectors, while President Sánchez welcomed the fact that Australian investment funds have significantly increased their presence in Spain in recent years.

In addition, both leaders reaffirmed their commitment to the swift conclusion of a “comprehensive and ambitious” trade deal between Australia and the European Union, and the Australian Prime Minister welcomed President Sánchez’s proposal for a high-level Spanish trade delegation to visit Australia in 2022 .

The two heads of state expressed their desire to increase cultural and educational exchanges and highlighted the contribution of the Cervantes Institute. They also recognized the important role of the Spanish-Australian Council Foundation in fostering links between business and civil society from both nations.

“As Spain prepares for its Presidency of the Council of the European Union in the second half of 2023, leaders intend to deepen and expand Australia’s and Spain’s long-standing engagement in policy areas of common interest,” the statement said both countries after the meeting.

COLLABORATION IN THE MARINE INDUSTRY

Both have also addressed the “long cooperation” in defense industry between Spain and Australia which has contributed to the naval capacity of both nations. In particular, the Albanian Prime Minister highlighted the involvement of the Spanish shipbuilder Navantia in the design and construction of 60 percent of the Royal Australian Navy’s ships by tonnage that have been commissioned since 2006.

The challenge of the global climate crisis is another issue raised by both leaders, emphasizing the need to work together to accelerate the clean energy transition while maintaining and enhancing energy security.

At this point, the Spanish President welcomed Australia’s commitment to stronger climate action and the Prime Minister
Albanese has welcomed the EU’s REPowerEU plan and other European Union climate change initiatives to make Europe independent of Russian fossil fuels and accelerate efforts to tackle climate change.

To that end, both have condemned Russia’s “unilateral, illegal and immoral aggression against the Ukrainian people” and believe the invasion constitutes a grave violation of international law, including the United Nations Charter.

Spain and Australia, which have agreed to continue supporting Ukraine, have reiterated their strong support for Ukraine’s sovereignty and territorial integrity and called on Russia to immediately withdraw its forces from Ukrainian territory and “hold them accountable for their actions”. .

In addition, the Australian Prime Minister commended Spain’s contribution to NATO’s joint efforts to support Ukraine and address global security challenges. “Australia is committed to working with NATO to maintain international solidarity in response to authoritarian pressures and commitment to international rules and norms,” ​​read the statement, which expressed Pedro Sánchez’s gratitude “for Australia’s unwavering support of the… Ukraine” includes.

COLLABORATION IN THE INDO-PACIFIC REGION

Sánchez and Albanese also addressed the situation in the Indo-Pacific and reaffirmed their vision of a free, open and resilient Euro-Atlantic space “in which countries respect the fundamental principles of sovereignty, territorial integrity and international law, in particular that United Nations Convention on the Law of the Sea, which includes the right to exercise the freedom of navigation and overflight”.

Australia has welcomed Europe’s “increased engagement” in the Indo-Pacific, reflected both in Spain’s appointment of an ambassador to that region and in the Joint Communication on the European Union’s strategy for cooperation in the Indo-Pacific.

INVEST IN INFRASTRUCTURE AND CLEAN ENERGY

Both countries have agreed to explore further avenues of cooperation in the region, for example in areas such as supporting major investments in infrastructure and clean energy.

And as “key” partners in multilateral fora, including the United Nations and the G20, Spain and Australia agreed to enhance cooperation and work together to “counter threats to the rules-based order and preserve the integrity of the multilateral system.”

“The two countries will work together to promote human rights, gender equality, sustainable and inclusive development and climate action as shared priorities across the multilateral system,” the statement concludes.