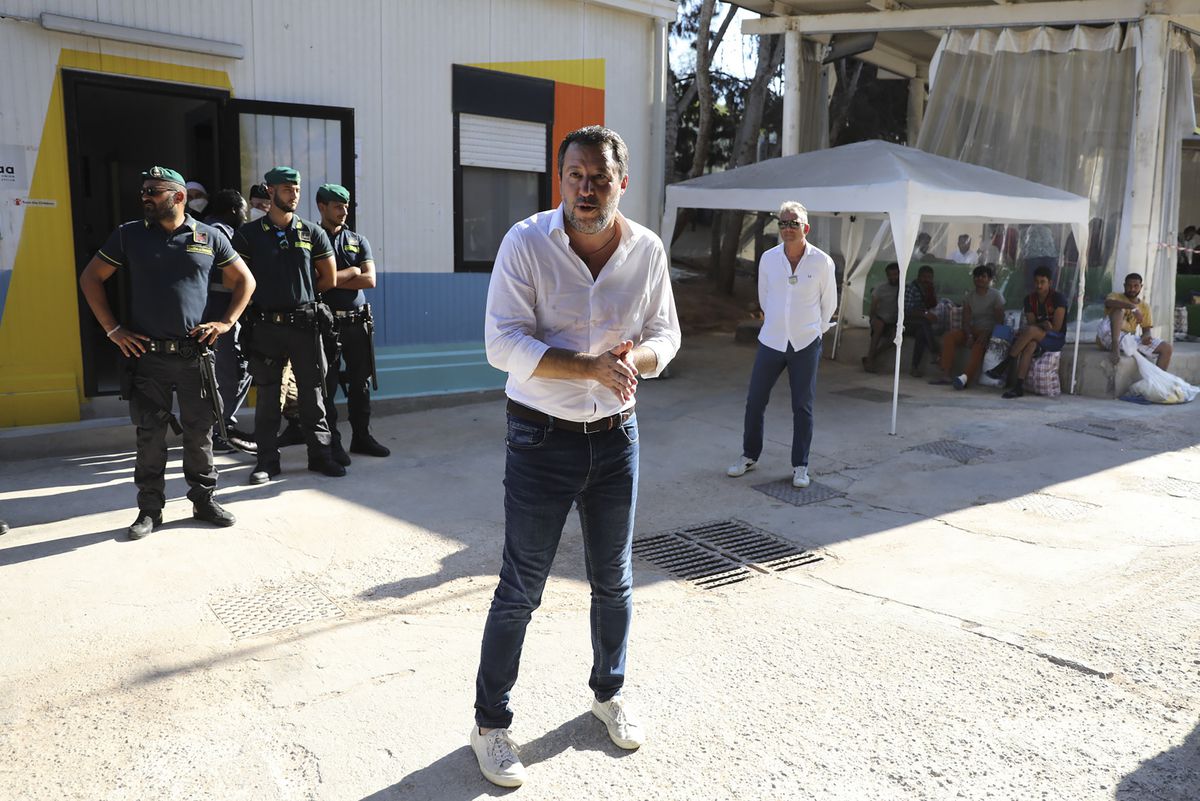 The island of Lampedusa – symbol of the migration drama, a universal welcome sign and at the same time a reflection of the climate of anti-immigration permeating Italy – is returning to the center of the election campaign. Matteo Salvini, leader of La Liga and former Interior Minister, has started his electoral journey with a two-day visit to this enclave, nicknamed “Gateway to Europe”, which is closer to Africa than Italy and which over the last 25 years has seen the arrival of tens of thousands of experienced immigrants. His intention ahead of the September 25 election is to once again put immigration at the center of the debate and bare teeth with renewed tough discourse laden with tough measures like closing ports to NGO rescue ships.

Salvini, received amid applause and whistles, promised this Thursday to control the borders if he returns to government after September 25. “If the Italians want it, we will again offer sacrosanct reception only to those who are genuinely fleeing the war, who are a minority of the arriving immigrants, only about 15 percent,” he claimed. The former interior minister visited the island’s reception centre, which has a capacity of about 380 people but which has housed about 1,500 people in recent weeks and is on the verge of collapse. The increase in arrivals from North Africa can be explained, among other things, by the good weather. “There is only one medical helicopter on the island. If one of these migrants needs it, it will not be available to any other Lampedusa resident,” argued Salvini, who was accompanied by the island’s deputy mayor Attilio Lucia, also from La Liga.

The politician, who is not at his peak of popularity, praised the immigration laws he pushed as minister in 2018 security decree, They envisaged fines of millions for NGOs that rescue migrants at sea and eliminated various forms of humanitarian protection. After criticism from numerous organizations, the text was abolished in 2020 after Salvini left the government.

According to the Interior Ministry, more than 42,000 immigrants have arrived on the Italian coast so far this year. That’s a significant increase compared to the more than 30,000 that landed in the country during the same period in 2021. “These numbers show that something isn’t working,” Salvini argued.

The La Liga leader continues to seek electoral wins in the normally choppy migration waters. Four years ago he won the votes of many Italians and multiplied the traditional results of his party. He then garnered 17% of the vote, presenting himself as the strongman fighting immigration.

Rivalry with brothers of Italy

Now, with two different governments in between, the picture is not the same. The wind does not blow so favorably for him. Polls give him between 12% and 13% of the votes. Meanwhile, Italy’s far-right Brothers of Giorgia Meloni, a formation previously lower than in the last election, will get 4%, the party with the most votes at around 23.4%, according to polls. Meloni and Salvini will go to the polls alongside Silvio Berlusconi’s Forza Italia in a coalition of the three right-wing parties. But as they recently agreed, it will be the formation with the most votes that will state the PM’s name. Therefore, overtaking Meloni is crucial for the La Liga leaders.

Salvini does not hide his intention that if the right manages to form a government, his party will occupy the interior ministry to enforce its immigration policies. But Meloni stopped him. “The government team will negotiate with the coalition after the election results,” he warned. The leader of the Brothers of Italy, a party born out of the embers of post-fascism, has even more extreme views on immigration. When Salvini spoke of closing ports to NGO ships, she directly suggested sinking the ships of these organizations. Meloni’s references in Europe are Poland and Hungary, which are increasingly being questioned in the European institutions because of their authoritarian drift.

But at the same time, the migration phenomenon is no longer a priority for Italians. The latest polls show that they are more worried about the rise in prices, the rise in energy prices or the impoverishment of society after the pandemic.

For Salvini, Lampedusa (6,000 inhabitants) is the symbol of his strong hand as interior minister. But in a way, it also represents the end of the xenophobic and authoritarian tendencies that it fostered. The closed ports farce began to be dismantled in July 2019 with the release of Carola Rackete, the captain of the humanitarian ship Sea Guard 3 who rebelled against Salvini’s orders and docked at the island with 40 immigrants on board. The court record of his case showed that the ports have never been closed and never can be closed. Shortly thereafter, another political battle between Salvini and the European Union did not go as hoped. He now faces trial for alleged kidnapping and dereliction of duty – crimes that could result in 15 years in prison – for blocking a Spanish NGO Open Arms ship with a hundred migrants on board for several days in August of the same year. off the coast of Lampedusa.

The humanitarian organizations Médecins Sans Frontières, SOS Mediterranée and Sea Watch have denounced the lack of search and rescue operations by European countries in the central Mediterranean. These organizations warn of the risk of new deaths. “The withdrawal of European search and rescue assets and delays in assigning safe places to disembark have weakened the search and rescue system’s ability to save lives,” the three organizations said in a joint statement. In just five days in July, two boats operated by these NGOs rescued 1,046 people. Of these, the 659 shipwrecked were rescued GeoBarentsfrom Doctors Without Borders, will land in southern Italy after a nine-day wait.

Previous articleAfter accusations against the director: rbb renounces the presidency of the ARD
Next articleMichèle de Roos confirms the separation from “Bachelor” Niko Griesert