Saint Peter’s does it again, surprising Purdue and proving ‘more is possible’ in March Madness 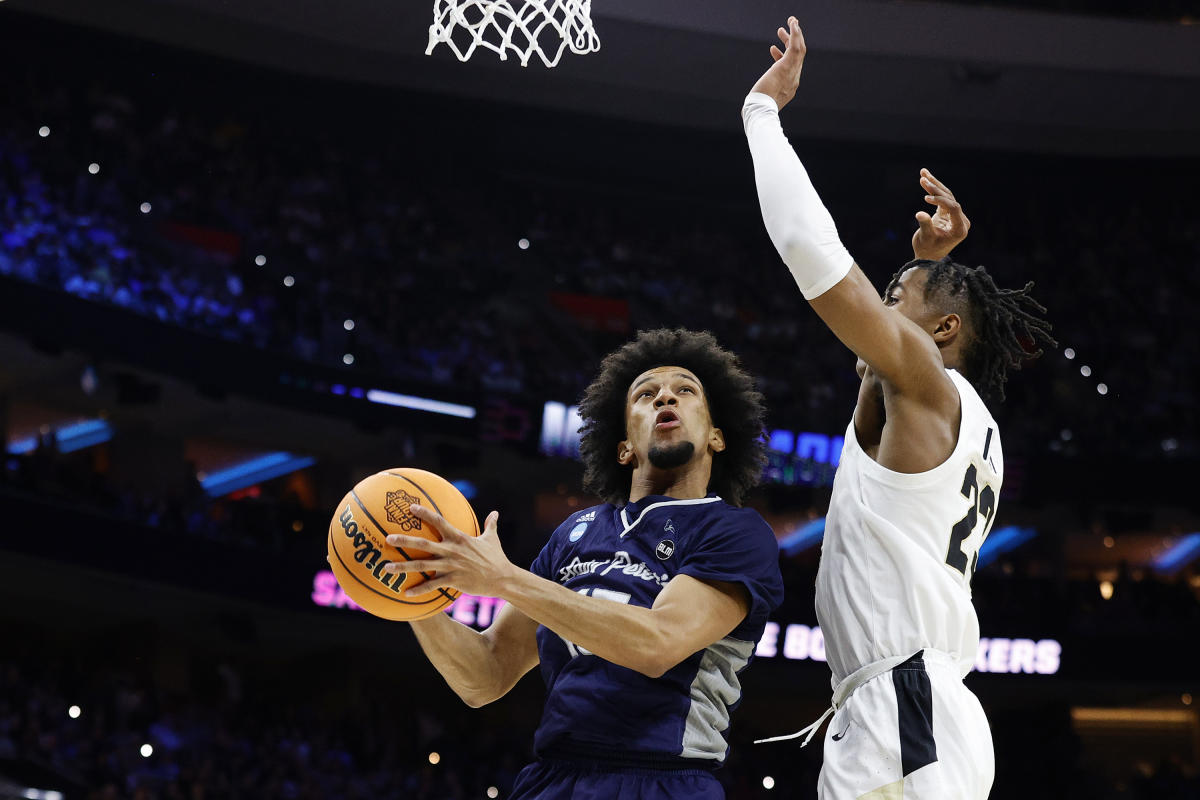 PHILADELPHIA — The latest chapter of Cinderella began with a swagger, from the peace and quiet of a Wells Fargo Center hallway to the spotlight. The peacocks of San Pedro had attracted him, of course, with this magical run from March Madness, and they’d gotten used to it, but a line of cameramen flocking to film them…entering an arena?

They then settled into a locker room and donned warm-up shirts with a statement of intent printed on the front: “MORE IS POSSIBLE.”

And then, for more than two hours here, they proved that it was.

They upset third-seeded Purdue, 67-64, in a Sweet 16 game that oddsmakers didn’t expect to be close. They thrilled a sold-out crowd wearing various shades of blue that, on a night that will endure in the NCAA tournament record books, all became St. Peter’s blue.

They became the first No. 15 seed to win a third game in the tournament.

They will advance to play at North Carolina or UCLA.

When Jaden Ivey’s potential game-tying 3-pointer went off the rails, they walked across the floor to their loyal fans in ecstasy. Doug Edert, their viral hero, climbed onto a courtside table and greeted them.

The Peacocks, all night long, savored the spotlight but weren’t overwhelmed by it. They craned their necks to look up at the colossal video board at the Wells Fargo Center, to see a pregame montage commemorating their own career; but then they went to work. They glued their eyes to head coach Shaheen Holloway, his animated last-minute commands, his captivating charm and experience.

They were with Purdue for four minutes, then eight. For 12 minutes, then 16. For half, then another half of half, and it was clear that they were here to stay.

Every time the Boilermakers threatened to retreat, the Peacocks responded. Freshman Clarence Rupert smiled after splashing a 3. Fellow freshman Jaylen Murray, generously listed at 5-foot-11, skied for a rebound. Daryl Banks III went up for an alley-oop dunk. Doug Edert, the viral sharpshooter, hit a 3-pointer and the Saint Peter fans, who had made the short trip down Interstate 95, erupted. Every bucket felt like a capital M Moment.

Holloway, meanwhile, was as calm as he could be. He crossed his arms. He put his hands in his pockets. He chatted with the referees. As his fans roared, he nodded knowingly and nonchalantly. He knew what the United States had recently learned: that their boys could play.

The peacocks played with poise, as if it were an open gym.

They erased a four-point halftime deficit in no time, with active defense and energy, and took a four-point lead. They forced turnovers and shot clock violations. Purdue coach Matt Painter called a timeout to calm a growing crowd, which had been filled with fans from UCLA and North Carolina, all of whom had latched on to the underdog. And they were growing in confidence. More, in fact, seemed possible.

The Boilermakers emerged from the timeout and put together an 8-0 run that said, matter-of-factly: “We are better than you.”

The peacocks replied: “We do not care. They pushed and disrupted Purdue’s pace. They drained 3-pointers in a row and leveled the score at 45. Fousseyni Drame’s 3-pointer with 6:21 remaining gave them a 50-49 lead.

Purdue went back to Williams, and again. With less than four minutes to play, after three free throws by Edert, the crowd rose, but there it was the Boilermakers, to the post. San Pedro star KC Ndefo fouled Williams and fouled out. Holloway, on the sidelines, knelt, devastated.