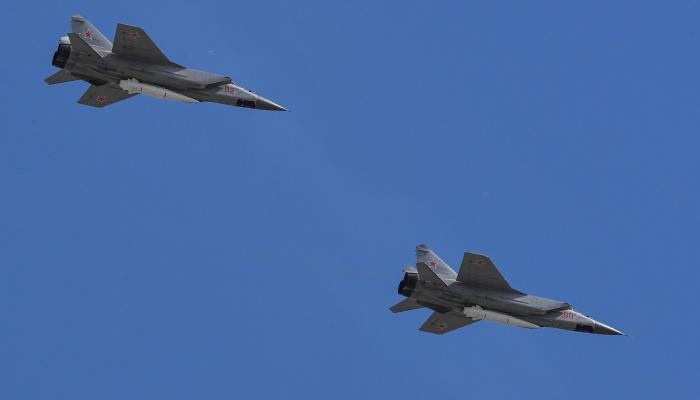 Along the lines of the Ukraine war, Russia’s “Kinzhal” missiles enter the first use of weapons that President Vladimir Putin says are “indomitable.”

The entry was revealed by the Russian military announcing on Saturday that it had struck areas in Ukraine with hypersonic missiles, in the first use of this type of missile, which means “dagger” in Russian.

Moscow has not announced the use of this type of missile since 2018, when it recorded its first successful test in a series of war games, raising questions about the messages from Moscow behind the dagger’s involvement in the conflict in Ukraine.

The “Khanjar” is an air-launched ballistic missile with a range of 2,000 km, being able to perform maneuvers in all phases of its flight, and can also be loaded with a conventional or nuclear war load.

It also has a speed of ten times the speed of sound, that is, 12,350 kilometers per hour, and one of its advantages is that it follows a winding path, which allows it to penetrate networks intended to hunt missiles.

It seemed clear that Moscow was sending messages behind the announcement of the use of “Kinzhal” missiles to confirm its military superiority on the ground at a time when the war entered its fourth week without an early resolution as expected.

“It is possible that (Russia) wanted to use Kinzhal in combat conditions. It is a world precedent,” Vasily Kachin, a military analyst and director of the Moscow Higher School of Economics Research Center, told AFP.

According to the source, the first targets of “Kinzhal”, which is an underground warehouse, have messages that reflect Moscow’s desire to demonstrate the practical capabilities of these missiles, thus hinting that Russian military capabilities are capable of making a difference. times.

As for “Kachin”, “it is difficult to destroy such facilities with conventional missiles. The hypersonic missile has penetrating ability and more destructive power thanks to its high speed”, which illustrates a demonstration aspect to show the superiority strategy in battle, even if it has not yet been resolved.

For his part, the Russian military expert, Pavel Felgenhauer, believes that the use of “Kinghal” does not give Russia a strategic advantage in Ukraine, even though it enhances the psychological factor and the confidence derived from Moscow pushing one of its most outstanding products. of destructive power into battle.

The expert said: “This matter does not change the depth of the field of reality, but it certainly has an impact on the field of psychological propaganda to scare everyone.”

What happens is that Moscow wants to increase the confidence of its forces on the one hand and create a kind of terror among the Ukrainians on the other, in a psychological factor considered fundamental in this type of war, and at a time when time passes . do not pass in favor of Moscow.

According to observers, the use of this type of missile also comes at a time when the Russian military has not yet taken control of Ukrainian airspace, as kyiv’s ground defenses are still capable of causing damage to the Air Force. from Moscow.

This type of missile is considered the pride of Russia and indicates its military superiority, according to previous statements by Putin, who has long praised Moscow for being the first country in the world to develop hypersonic missiles.