Russia’s conditions for the agreement with Ukraine .. Putin informs Macron 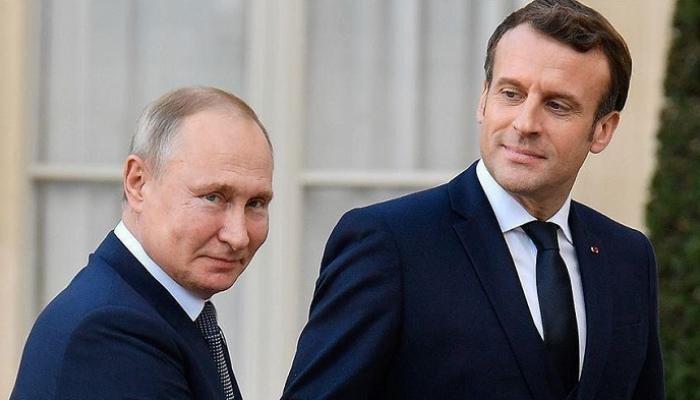 Russian President Vladimir Putin laid out the basic conditions for a possible agreement with Ukraine, during a telephone conversation with his French counterpart, Emmanuel Macron.

The Kremlin issued a statement that said: “At the initiative of the French side, a telephone conversation took place between Russian President Vladimir Putin and French President Emmanuel Macron, during which the exchange of views on the situation in Ukraine”.

The statement said that Putin and Macron discussed talks between Moscow and kyiv, with Putin explaining the basic approach to developing possible agreements with Ukraine.

He added that Putin discussed with Macron the state of negotiations between the Russian and Ukrainian representatives, and the basic approach of the Russian side to the development of possible agreements was clarified.

Earlier, Moscow announced that it had made tangible progress in its talks with kyiv on a point related to ensuring Ukraine’s neutral status and its abandonment of the idea of ​​joining NATO.

Russia’s chief negotiator Vladimir Medinsky said in a press release: “The issue of Ukraine’s neutrality and non-adherence to NATO is one of the main points of the talks, and this is the point at which the two parties were able to contribute their opinion”. positions closest to the maximum.

Medinsky noted that he is currently dealing with some details regarding what additional security guarantees will be provided to Ukraine if it abandons the idea of ​​joining the North Atlantic Treaty Organization.

The Russian chief negotiator appreciated the progress in the talks on the issue of disarmament in Ukraine that the two parties were “almost halfway” in this regard, noting that he was not authorized to reveal any specific details of the negotiation process and the evidence . of the two delegations.

Regarding the issue of the eradication of Nazism in Ukraine, Medinsky described the situation of the talks as “strange”, and explained that kyiv denies the existence of Nazi formations on its territory.

He added that the Ukrainian negotiators “ignore the facts that concern the whole world”, including the activities and training of the Nazi armed formations on the territory of this country and the names of the Nazi criminals on the streets of the big cities of the same. .

For his part, a Ukrainian negotiator in talks with Russia said Ukraine’s position has not changed and he wants the peace talks to lead to a ceasefire, the withdrawal of Russian forces and security guarantees.

And the negotiator, Mikhailo Podolyak, continued: “The statements of the Russian side are nothing more than the positions they request. All the statements are aimed, like other things, at increasing tension in the media, and our positions have not changed, a ceasefire, a withdrawal of forces and strong security guarantees in specific formats”.