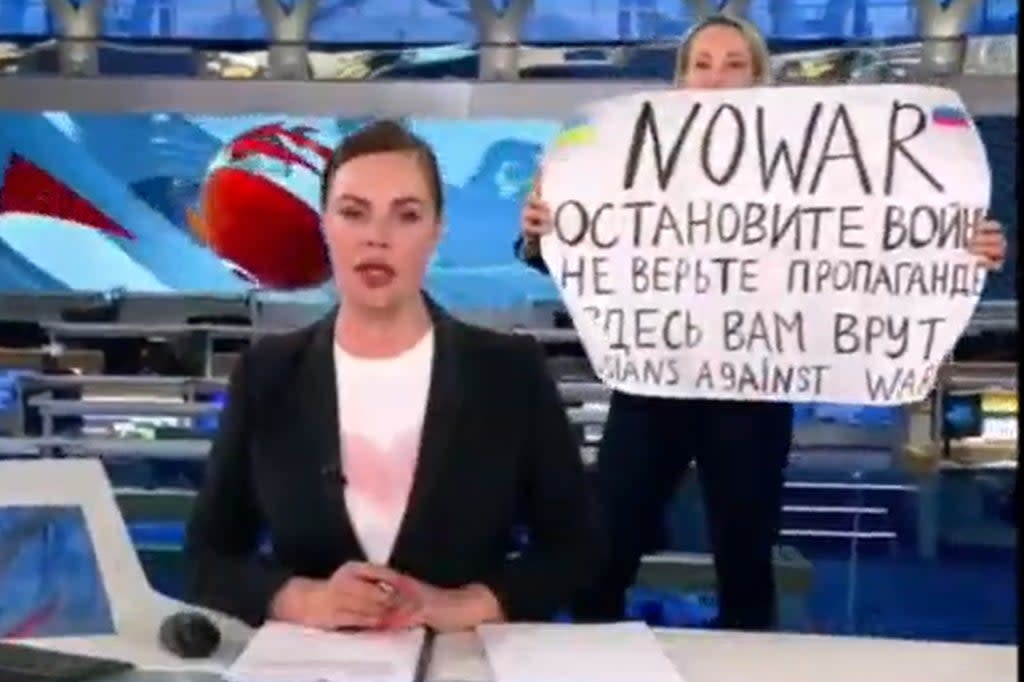 A Russian television news staffer broke into the state’s main news program in a brave protest against “propaganda” about the Ukraine war on Monday night.

Marina Ovsyannikova, a state employee of Channel One, was identified as the protester who stormed the set of the live broadcast of the nightly news, shouting: “Stop the war! Not to was!”

He was also holding a sign in Russian which can be translated as: “Don’t believe the propaganda. They’re lying to you here.”

Ms Ovsyannikova pre-recorded a separate message beforehand in which she said that her father was Ukrainian and that she was “ashamed to be” a Channel One employee.

“What is happening in Ukraine is a crime and Russia is the aggressor,” said Ms. Ovsyannikova.

In English, his sign reads: “No to war. Russians against the war”.

And in Russian it said: “NO TO WAR. stop the war Don’t believe the propaganda. They’re lying to you here.”

While standing behind the presenter, the protester could be heard saying, “Stop the war! It was not! stop the war It wasn’t!”

The channel quickly cut to a pre-recorded segment, but she could still be heard screaming in the background.

He posted a video of the incident, which quickly racked up more than 2.6 million views.

In the pre-recorded video before the protest, Ms. Ovsyannikova told the camera: “What is happening now in Ukraine is a crime, and Russia is the aggressor country. The responsibility for that aggression rests on the conscience of one man, and that man is Vladimir Putin,” she said.

“Now the whole world has turned away from us and the next 10 generations of our descendants will not erase the shame of this fratricidal war,” he said.

He urged the Russians to come out and demonstrate.

“Only we have the power to stop all this madness… They can’t put us all in jail,” the statement concluded.

Pavel Chikov, head of the human rights group Agora, said that Ms. Ovsyannikova had been arrested and taken to a Moscow police station. The Tass news agency said she could face charges under a law against discrediting the armed forces, citing a police source.

The law, passed on March 4, carries out public actions aimed at illegally discrediting the Russian military and prohibits the dissemination of false news or “public dissemination of deliberately false information about the use of the Armed Forces of the Russian Federation.” The crime carries a prison sentence of up to 15 years.

It came as Britain bluntly warned Vladimir Putin on Monday that he would face “war with NATO” if even “a single Russian soldier” entered the territory of the 30-member military alliance.