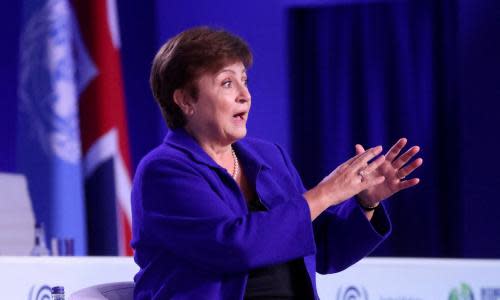 A Russian default on its debts after Western sanctions over its invasion of Ukraine is no longer “unlikely” but would not trigger a global financial crisis, the head of the International Monetary Fund said on Sunday.

The Washington-based fund’s managing director, Kristalina Georgieva, said sanctions imposed by the United States and other nations were already having a “severe” impact on the Russian economy and would trigger a deep recession this year. The war in Ukraine will also drive up food and energy prices, leading to famine in Africa, she added.

Georgieva told CBS’s Face the Nation: “In terms of servicing debt obligations, I can say that we no longer think of Russia’s default as an unlikely event. Russia has the money to pay its debt, but it cannot access it. What worries me the most is that there will be consequences that go beyond Ukraine and Russia.”

Asked if a Russian default could trigger a global financial crisis, Georgieva said: “For now, no.” The banks’ total exposure to Russia amounted to about $120 billion, an amount that, while not insignificant, is “not relevant,” she said. Last week, she said the IMF would lower its earlier forecast of 4.4% global economic growth in 2022 as a result of the war.

Related: Kristalina Georgieva: the head of the IMF in the face of Covid, the climate crisis and, now, the war

Separately, Russia said on Sunday it was counting on China to help it withstand the hit to its economy from sanctions, but the United States warned Beijing against providing such support. Russian Finance Minister Anton Siluanov said Moscow was unable to access $300 billion of its $640 billion in gold and foreign exchange reserves, but still held some of its reserves in China’s currency, the yuan.

“And we see what pressure Western countries put on China to limit mutual trade with China. Of course there is pressure to limit access to those reserves,” he said.

“But our partnership with China will still allow us to maintain the cooperation that we have achieved, and not only maintain it, but also increase it in an environment where Western markets are closing.”

Russia is due to make two interest payments on March 16. However, you will have a 30-day grace period to make coupon payments.

Siluanov said on Sunday that it would be “absolutely fair” for Russia to make sovereign debt payments in rubles until its foreign exchange reserves were unfrozen, according to Interfax.

Related: What happens if Russia cannot pay its debts after Western sanctions?

The IMF director expressed concern about the indirect effects of the war on Russia and Ukraine’s immediate neighbors because they have close trade relations with both countries, and about the large number of Ukrainians fleeing the conflict, Europe’s largest refugee crisis. since it became the second world. .

The IMF is also “very concerned” about countries that have not yet recovered from the covid-induced economic crisis, which will be hit hard by rising prices of wheat and other raw materials. “For them, this shock is particularly painful,” Georgieva said. Other countries are heavily dependent on energy imports from Russia.

“Yes, the war in Ukraine means famine in Africa, but the war in Ukraine also has social implications for many, many countries across all three channels,” he said. “One, the prices of raw materials, energy, grains, fertilizers, metals… the impact that it has on inflation and in countries where inflation has already been high, this is dramatic.” Georgieva gave Brazil and Mexico as examples. The increase in inflation will force the authorities to tighten financial conditions, bringing more difficulties to people.

However, economic growth remains strong in countries like the US that have quickly recovered from the pandemic, he told CBS.