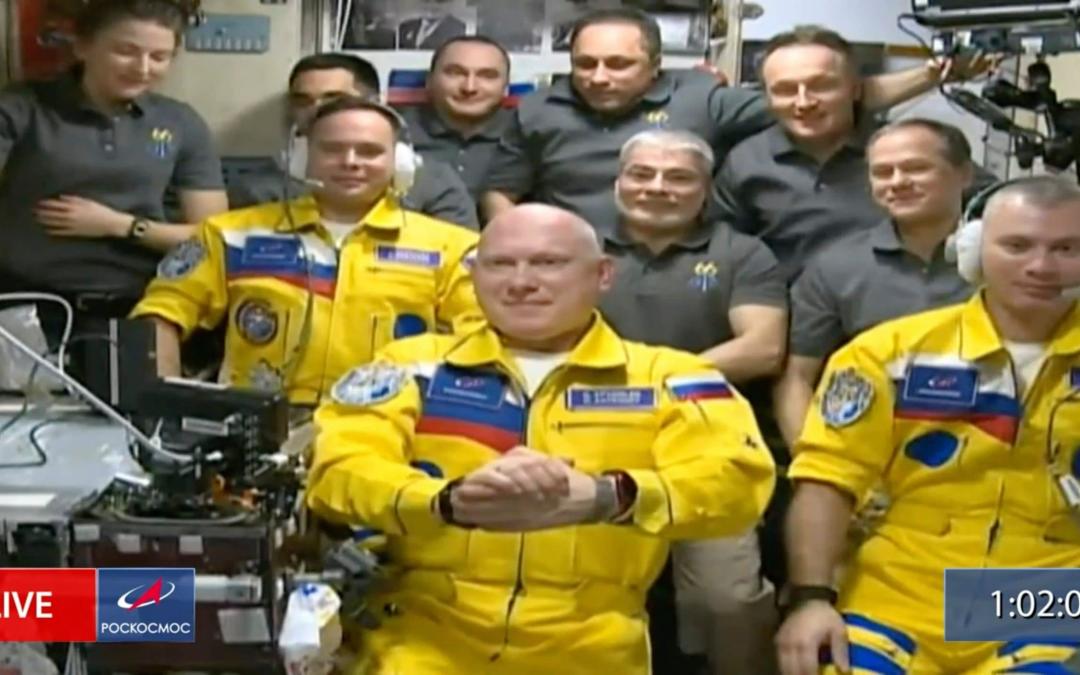 Three Russian cosmonauts arrived at the International Space Station wearing flight suits in the colors of the Ukrainian flag, in what appears to be a bold statement of support for the nation currently fighting a Russian invasion.

They were the first newcomers to the space station since the start of the Russian war in Ukraine last month.

A video showed the men, Oleg Artemyev, Denis Matveyev and Sergey Korsakov, from the Russian space corporation Roscosmos, wearing blue and white suits before taking off on Friday.

When they arrived, they had changed and boarded the space station wearing yellow suits with blue accents.

When asked about the suits once they arrived at the ISS, where they joined the American, Russian and German crew, they did not mention Ukraine.

Mr. Artemyev explained that each crew chooses their own suits, so they are not all the same.

“We had accumulated a lot of yellow material, so we needed to use it. That’s why we had to wear yellow,” he said.

Writing on Twitter, he noted that flight suits are typically “picked and packed a few months before mission launch. So it’s possible this is a coincidence. But it seems like a very, very big coincidence if it is.”

Whether intentional or not, many were supportive of the color choice. Retired NASA astronaut Terry Virts commented on a photo of the men with the words: “Wow. Just wow. Well done.”

But the Russian space agency has dismissed speculation that the colors were a show of support for Ukraine.

“Sometimes yellow is just yellow,” Roscosmos said in a statement. “Seeing the Ukrainian flag everywhere and on everything is crazy.”

The International Space Station is a collaboration between the space agencies of the US, Russia, Europe, Canada and Japan.

The United States and Russia have maintained a shared presence there for more than two decades, but after the Ukraine invasion, Russia’s space chief Dmitry Rogozin raised the possibility of withdrawing from the partnership in response to US sanctions.

At the time, NASA said the countries were continuing to work together peacefully in space.

Kathy Lueders, associate administrator for space operations at NASA. she said: “Obviously we understand the global situation and where it is, but as a joint team, these teams are operating together. We have operated in these types of situations before and both sides have always operated in a very professional manner.”

However, they indicated that officials were exploring ways to keep the ISS in orbit without Russian help, just in case.

“We’re always looking at how we get more operational flexibility,” he said.