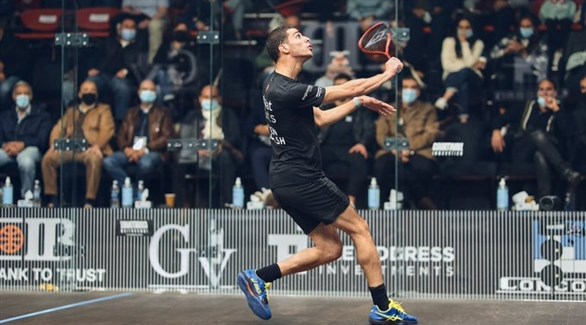 Double standards”, “double standards” and “rejection of discrimination”. With these expressions, the Arab athletes criticized international sports organizations after the imposition of sanctions against Russia in the context of its invasion of Ukraine, considering that these measures contradict the motto. of not getting involved in politics with the sport that they have been proposing for years.

Following his victory at the recent Optacia squash tournament in London, Egyptian player Ali Farag, ranked second in the world, said: “Before we weren’t allowed to mix politics with sports, but suddenly now it’s allowed. Maybe people You’re looking at the oppression that’s happening all over the world.”

“The Palestinian people have been suffering for 74 years. As long as we can talk now about the Ukrainians, we can also talk about the Palestinians,” she added.

Four days after Russian President Vladimir Putin announced the start of his forces’ attack on Ukraine, the sport of sanctions against Moscow was repeated.

The International Federation (FIFA) and the European Football Association (UEFA) made strict decisions to exclude the Russian football team from the qualifying play-off for the Qatar World Cup 2022. The Russian Formula One Grand Prix was canceled and Saint Petersburg was stripped of hosting the Champions League final.

On sports podiums, many expressed their solidarity with Ukraine, and solidarity campaigns were allowed through it, in a way that was previously unfamiliar in sports.

Many Arab athletes see the Russian invasion of Ukraine as analogous to Israel’s “occupation” of Palestinian land and repeated military operations against Palestinians. They point out that they have often been punished or criticized when they openly express their solidarity with the Palestinians.

When the Premier League players put on the Ukrainian flag on their sleeves or observed a minute of silence in honor of the victims of the Ukrainian war before kick-off, no one objected, on the contrary, they received support.

But this caused the athletes to consider that there is a distinction between humanitarian and human rights issues.

Palestinian midfielder Muhammad Basem refused to stand with his Indonesian team, Persib Bandung, behind a banner reading “Stop the war” in Ukraine.

He said, “I am against any war in any country, but in Palestine people die every day… When the war took place in a Western country, all the people were in favor, but when people die in Palestine, they don’t.” we are allowed to sympathize with them and we are accused of confusing politics and sport. You feel that your life is cheaper than the lives of people in the West.”

And it wasn’t just Arab athletes. Like his teammates, Erzurumspor player Aykut Demir recently refused to wear the “No War” jersey, explaining to Football Anadolu’s website that “a lot of people die every day in the Middle East. Those who they ignore the persecution there they do these things when it comes to Europe.”

James Dorsey, a research fellow at the Middle East Institute and an analyst at S Rajartnam University of International Studies in Singapore, says: “International sporting bodies, including FIFA, have banned any political or religious expression in the sporting arena. What they have done now It is that they have lifted it from the Ukraine, there is Palestine, of course, but Yemen? Syria? Libya?

Palestinian Football Association director Jibril Rajoub dwells on the difference in treatment, saying: “The Israeli army obstructs the movement of Palestinian athletes, whether in the West Bank or between the Gaza Strip and the West Bank, and our sports movement depends on the mood of the Israeli military leader.”

He added: “FIFA must confirm its commitment to apply the laws equally. There are Israeli clubs registered with the Israel Football Association that play and are registered in the occupied territories since 1967, and this contradicts the laws of the United Nations itself, and the International Federation does nothing”.

Arab players have always been very careful in international forums, during clashes where Israeli players are present, as any refusal or refusal to confront or even shake hands with an Israeli player leads to sanctions.

In the third preliminary round of the 2014 Champions League, Liverpool’s Egyptian star Mohamed Salah refused to shake hands with Maccabi Tel Aviv players while playing for Swiss side Basel, justifying his time by changing shoes. At the end of the match, Salah ran to the locker room without shaking hands or changing the jersey of any of the players.

In the second leg in Tel Aviv, he also refused to shake hands with the Maccabi players traditionally and shook their hands with his fist, exposing him to criticism from the Israeli media.

In July 2021, during the Tokyo Summer Olympics, the Algerian Olympic Committee withdrew credit for judoka Fathi Norine and her coach Ammar Benkhlief, to be deported to their country after they were temporarily suspended by the International Federation of Judo. game for refusing to face an Israeli player.

Noreen announced at the time, in statements to a local Algerian channel, her withdrawal because “the Palestinian cause is bigger than these issues, and this is an irreversible decision.”

The Game Association itself recently announced the “suspension” of Putin’s honorary presidency and his position as ambassador of the Federation “in view of the current conflict in Ukraine”, and after the invasion of Ukraine demanded that Norin reconsider his sentence.

Dorsey warns against adopting “double standards”, referring to FIFA by saying: “Be careful because you are sitting in a glass house”.

He believes “the idea that politics and sport are separate is fanciful. They are conjoined twins. As long as you deny this relationship and act as if it doesn’t exist, you enable corruption, whether it be financial or political corruption.”

He concludes: “The only solution is to acknowledge the existence of that relationship.”