Russia is considering a new serial production of the Il-96 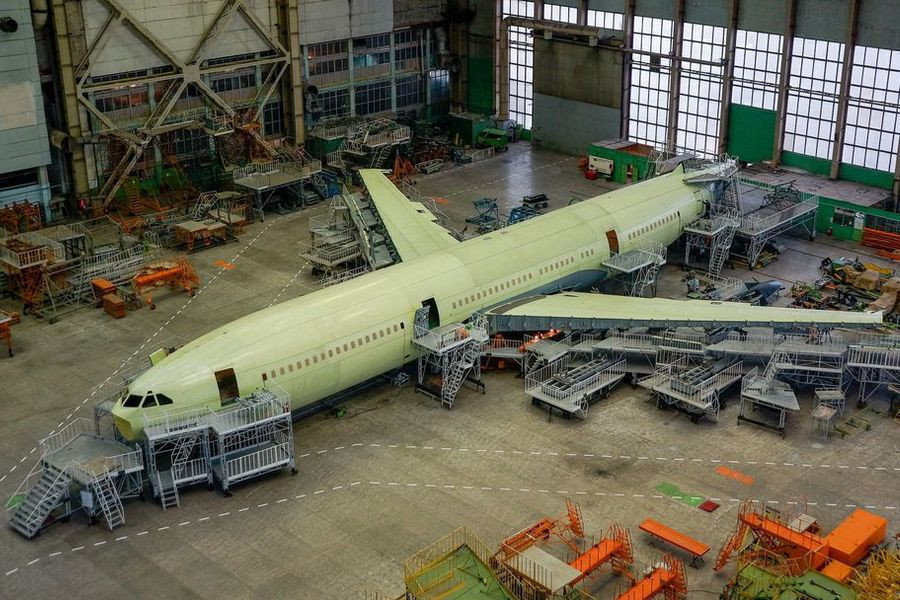 VORONEZH – The first Il-96-400M has been stuck in final assembly for ages. At the end of the year, it should finally take off – and serve as a “flying laboratory”. Series production suddenly seems possible again. However, this would only make sense on two conditions.

Some things take time. Much of the time. Especially in Russia. There, the WASO Voronezh Aircraft Plant began final assembly of the first prototype of the Ilyushin Il-96-400M in early 2020.

It is a modernized version of the Il-96-300 from the 1980s, lengthened by about nine meters and powered by four “made in Russia” PS-90A turbofan engines. WASO had the fuselage of the new aircraft largely in storage in earlier times, when Voronezh was still manufacturing Il-96-400T freighters.

Nevertheless, the assembly of the new airliner was painfully slow. Two and a half years later, in July 2022, the plane has still not seen the light of day. At the end of 2022, however, it should finally fly and take off for its maiden flight.

“Flying laboratory” or end of the world?

What will happen to the Il-96-400M next is still officially unclear. The Russian state aircraft manufacturer, which owns UAC, has actually ruled out serial production in the spring of 2021 – due to a lack of orders. No one wanted to buy the gas-guzzling four-jet engine.

Instead, the prototype should serve as a “flying laboratory” for new Russian aircraft technology, Russian government officials suggested earlier this year. The military had also expressed interest before – the first Il-96-400M and a second aircraft under construction could be used as so-called “doomsday aircraft”.

Mass production is not irrelevant after all?

In the meantime, UAC’s attitude about mass production seems to have loosened up a bit. At least they want to keep a door open, as the statements of an insider quoted by the Tass news agency suggest.

In the conversation, he confirmed that the first launch of the Il-96-400M will take place “by the end of the year”. And goes on to explain: “Based on the results of the certification tests, a decision is made on serial production.

However, objectively speaking, a possible serial production of the Il-96-400M would make sense only on two conditions: On the one hand, as already stated, Russia should effectively withdraw from the CRAIC heavy-lift project CR929 launched with China.

Such a scenario is very likely, since the sanctions against Russia will require a reorganization of the program, in which China is not too keen to put up with it.

On the other hand, the Il-96-400M should be converted from four to two engines in order to fill the gap that has opened up as a cost-effective replacement. The new PD-35 turbofan that Awiadwigatel is currently developing for the CR929 would be available for this if needed. It could be available in 2024, maybe a little later. Until then, it would be time to test other Russian-origin systems that can technically keep up with their Western counterparts.

In fact, the insider quoted by TASS said that the Il-96-400M will also be “used to test technical solutions for long-range wide-body aircraft” after its completion. First of all, they want to test “modernized systems” of Russian origin, “including a promising national complex of flight and navigation equipment”.

The TASS source does not talk about tests with the PD-35. However, Oleg Bokharov, Russia’s Deputy Minister of Industry and Trade, brought up the Il-96-400M for discussion in January. Its layout, especially the design of its wings, predestines the Il-96-400M “as a flying laboratory for testing the PD-35 family of engines” with thrust levels between 24 and 50 tons, Bocharow told reporters. journalists on the sidelines of a meeting with the Prime Minister. Mishustine.

The Ilyushin Il-96-400M is finally set to take off at the end of 2022 – after almost three years on the final assembly line. What will happen to the model is not yet officially clear – but if Russia does withdraw from the CR929 program, the Il-96-400M could be back on the roster.

Provided it receives an engine upgrade and possibly flies around the country as a twin. With such an “Il-96-400M-neo”, equipped with up-to-date avionics, you would have at least a domestic wide-body jet product that is technically not completely obsolete. Does this really happen? Hard to say. Only one thing is certain: it will take time…