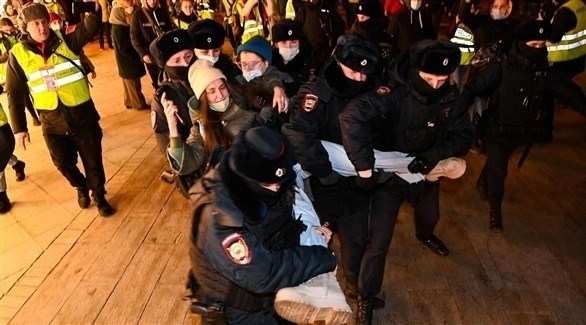 A non-governmental organization reported the arrest of more than 250 people who demonstrated across Russia on Sunday against the Russian military operation in Ukraine.

OVD-Info, a non-governmental organization that monitors demonstrations, stated on its website that “at least 268 people were arrested in 23 cities.”

In Moscow, a few dozen defied a protest ban and gathered in Manezh Square near the Kremlin.

At least 30 protesters and a journalist were detained by police, according to AFP.

“Peace in the world!” the woman shouted. While two policemen dragged her by force.

In St. Petersburg, where several police cars were seen downtown, protesters tried to be careful.

Christina was wearing a blue jacket and a yellow hat, the colors of the Ukrainian flag. “Of course going to the awful protest. Everyone is being taken away, many of my friends have been arrested and some have been expelled from the university,” she told AFP.

“I wear the colors of Ukraine and I am here, protesting in one way or another,” he added.

“You are all traitors, we should arrest you all,” shouted a woman in her sixties passing by.

AFP confirmed that the police arrested several protesters and some journalists.

Despite the ban, protesters gather daily in Russia to denounce the military intervention in Ukraine.

Although their scope is limited, the fact that these meetings were organized in the midst of very strong repression is striking.

Protesters are systematically fined or even jailed. More than 5,000 protesters were arrested last Sunday.

- Advertisement -
Share
Facebook
Twitter
Pinterest
WhatsApp
Previous articleFuel price brake, energy money, heating surcharge: these relief options are being examined by the traffic light policy
Next articleA new mission for NASA and a piece of the moon in Egypt… a relationship that is half a century old