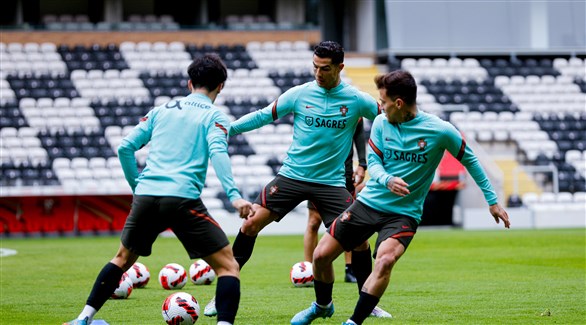 Portuguese star Cristiano Ronaldo is overjoyed at the return of veteran defender Pepe to the Portuguese national football team squad, after missing out on the team’s 3-1 win over Turkey in qualifying last Thursday. the 2022 World Cup, due to his infection with the Coronavirus.

As Pepe, 39, came out of the dressing room, Ronaldo shouted with a smile before training the Portuguese team in a warm and sunny atmosphere on Sunday morning in Porto: “The king is back, Pepe is back in his place, look.

The two players hugged and laughed before warming up side by side during the penultimate training session in preparation for facing North Macedonia in the final of the European qualifiers next Tuesday, for a place in the World Cup final in Qatar.

Ronaldo’s sentiment mirrors the prevailing sentiment in the Portuguese team as they prepare to host North Macedonia, who pulled off a huge upset with a 1-0 victory over Italy in the semi-finals to deprive the Portuguese fans of a great showdown. between the last two European champions.

“Frankly, we all expected to face Italy in the knockout final,” Portuguese midfielder Joao Moutinho told a news conference. “Football is different these days and every team can win at this level regardless of names, numbers and statistics. North Macedonia will do everything to beat us on Tuesday.”

Manchester City’s Portuguese striker Bernardo Silva told reporters on Sunday: “North Macedonia have won four of the last five games they have played in World Cup qualifying, and two of these clashes were against giant teams like Germany and Italy… and that means a lot.”

He added: “This is a team that plays completely offensively and will put pressure on us and play with a lot of confidence, but the pressure is always there…because it’s not about the opponent, it’s about qualifying.” the world Cup. We must appear in Qatar because we cannot disappoint our fans.”

Silva added: “Our team is full of experienced players who used to play crucial games with the biggest clubs in Europe. We all know how these games are and we have to work hard and keep our focus on the goal, which is to go to Qatar.”